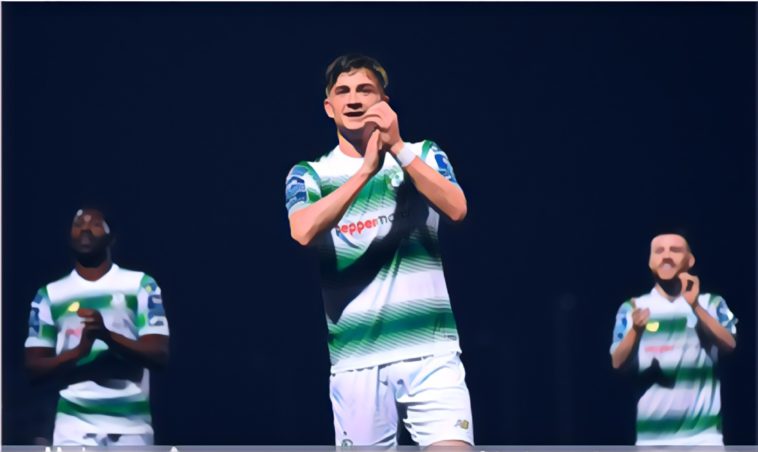 Shamrock Rovers continue to impress, Bohs set up a mouthwatering Dublin Derby, John Caulfield is on his last legs, and other things we observed in the League of Ireland this week.

Rovers’ imperious away form has them peeling away from the rest

Every championship winning team has these sort of wins. Those gritty, unspectacular and closely contested games where the only thing that matters is the result. No one will remember them when they look back on the season, but they are no less important in a title run.

On Friday Shamrock Rovers went away to the Brandywell, a notoriously difficult venue to come away with three points, and did just that against a good Derry City team, extending their lead at the top

The Candystripes pressed high up the pitch to counter the Tallaght outfit’s preference to play out the back, forcing them to hit it long and relinquish possession. The home side also had the majority of the better chances, especially in the first half, but couldn’t make them count.

Rovers scored against the run of play just before half-time, when a Jack Byrne through ball took out the entire defence, sending Aaron Greene through on goal to coolly slot the ball past Peter Cherrie. The visitors were resolute in defence until the final whistle, with centre-back Roberto Lopes winning the Man of the Match award for his commanding performance. Derry kept knocking on the door but he kept turning them away.

Following that victory, Rovers have now gone to Derry, Finn Harps, Waterford, St. Pat’s and won by the narrowest of margins, and also got a 3-1 win over Cork City in Turners Cross a fortnight ago. The only league game they have failed to win away from home so far was against local rivals Bohemians (more on them in a bit).

In recent years Rovers have put together some impressive performances under Stephen Bradley, but have continually failed to put together a string of wins and the kind of consistency needed to challenge for the league. If their title credentials weren’t proven before, they are now after their eighth consecutive victory.

Judging by reports from Dalymount Park on Friday even, Bohemians weren’t all that impressive in the first half against lowly UCD. The Students had some gilt-edged chances, yet went in 1-0 down at the interval after giving up a penalty in the 43rd minute.

Bohemians 3-0 UCD. Bohemians move into second spot in the Premier Division after a comprehensive victory over UCD at Dalymount Park. #rtesoccer pic.twitter.com/G3TQCUpIeM

In the second half, Conor Levingston and Daniel Grant added to Dinny Corcoran’s spot-kick to give the Gypsies their seventh win of the campaign thus far. The northside outfit may have lost to Dundalk earlier in the week, but they remain in second place on 23 points.

That puts them eight points behind Shamrock Rovers, a sizable gap between the top two, although Bohs do have a game in hand and face their bitter rivals on Tuesday. Two wins and they could be within two points of the leaders.

You wouldn’t put it past them either; Bohs have won five of the last six contests between them, with Rovers’ last win coming in May 2017. The Dublin Derby is generally considered the biggest game in Irish football, but next week’s clash might just be the biggest derby in years.

The last five or so years have seen Waterford FC living in the shadow of their more illustrious neighbours in Cork, who have been consistent challengers for the Premier Division title during that time, whereas the Blues have been more accustomed to the second tier.

You would think then that Friday’s 2-0 win over the Rebel Army in the Munster Derby would be a momentous occasion for them, yet it was overshadowed by circumstances off the field earlier in the week.

Waterford FC 2-0 Cork City. Waterford put a miserable week off the pitch behind them as they earned a deserved 2-0 victory over Cork City in the Munster Derby at the RSC, with two cracking goals. #rtesoccer pic.twitter.com/lq0YcvEEDC

Waterford were denied a licence to partake in European competition for the 2019/2020 season, with their place in the Europa League instead going to St. Pat’s due to Uefa’s club licensing and financial fair play regulations.

UEFA state that a club’s “membership and the contractual relationship (if any) must have lasted – at the start of the licence season – for at least three consecutive years.” Lee Power took over Waterford United as owner and chairman in 2017 and rebranded the club Waterford FC.

While this was always a possibility, the club were evidently confident they would be competing in Europe this season, going so far as to advertise travel arrangements for the first qualifying round in their matchday programme.

Perils of printing deadlines for Waterford programme for game v Cork City, or The Who’s Having A Worse Week Munster Derby pic.twitter.com/hMEPjUWzzZ

Power reacted angrily to the news this week, laying the blame at the feet of the FAI, who apparently “totally misled” the club. “(We) were given assurances throughout this five-month process by them that the licence would be granted. We also had club visits by UEFA Delegates during this period of which no issues were raised,” the Waterford chairman said in his statement.

Power also confirmed that they had already budgeted for the prospect of European football this season, and they will be appealing the decision with UEFA. There are serious questions to be asked of the FAI in all of this, who have endured one of the worst months in their history.

Meanwhile, there at least some positives for Waterford to dwell on, including their first win in five games, a healthy position in the table, a welcome attendance over just over 2,600 and dispatching their local rivals without fuss.

A few short weeks ago we asked if this was the end of the road for John Caulfield at Cork City following their loss to Dundalk. In the four games since then they have failed to win a league game, and his position at the helm of the 2017 champions appears to be all but at an end.

Caulfield, a former City player himself, is held in very high esteem among the Cork faithful, having won six trophies during his six years in charge. The turnaround this season has been stark, however.

To put their woeful campaign into context, the Rebels have not won in their last five league fixtures, losing four of those, and have only won one home game all year. They are closer to the relegation zone than they are to the top of the table, where they lie one point above UCD in the playoff spot and 20 behind Shamrock Rovers.

It seems the pressure is getting to the manager as well, who appeared to clash with one of his own players at the Belfield Bowl earlier in the week.

Footage has emerged online of Cork City manager John Caulfield clashing with one of his own players during Cork City's game against UCD AFC at the UCD Bowl, Monday night.#LOI pic.twitter.com/oOGXiNET01

Cork were a goal up late on in that game before succumbing to a Yousef Mahdy equaliser with five minutes remaining and a Gary O’Neil penalty in the 93rd minute. They also conceded a late equaliser against St. Pat’s the week before when victory was in their grasp.

Caulfield has done so much for the club, but if attendances start falling as deflating results continue to rack up, then they may have to cut their losses sooner rather than later.

A bright spark in defeat for Derry City

Friday night’s 1-0 defeat to Rovers was a disappointing result for Derry, but with the game aired live on RTE, viewers got to catch a glimpse of nifty forward Junior Ogedi-Uzokwe.

The Englishman played predominantly wide right against the Dublin outfit, causing the opponents numerous problems by cutting inside and taking on defenders head on. He clearly has skill to burn with great ability on the ball in tight spaces, although his decision-making could be improved upon.

Junior’s end product was missing this week, but it is worth noting that the Rovers’ centre-backs were imperious in front of goal, shutting down the Derry attack in the second-half. Manager Declan Devine also changed the setup with about 15 minutes left to a front two with a number 10 in behind, which appeared to inhibit their attacking threat rather than enhance it.

The 25-year-old is on loan from League Two side Colchester United, has scored two goals in 11 games in all competitions and could be one to look out for for the rest of the season.

Can anyone tell who is going to be promoted this season? Because I sure as hell can’t. At the time of writing Cabinteely, who have only been in the League of Ireland for four years, have taken top spot for themselves , but no one has kept it for more than two games at a time so far.

Longford, as the only unbeaten team in the country, would be my bet for automatic promotion at the end of the season, although with six teams in contention there’s no telling who it could be.

See Also: Top five Irish players to have ever played in the Premier League era