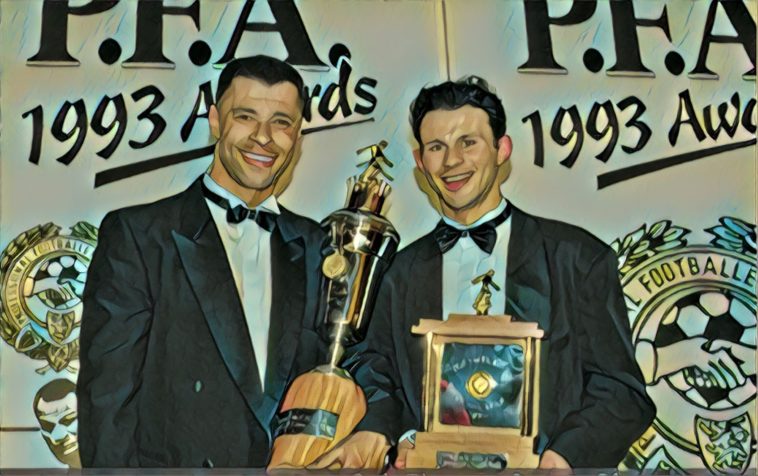 Looking through the past winners of the Young Player of the Year award, one finds some illustrious names on the list. There’s Paul Gascoigne and Matthew Le Tissier, David Beckham and Steven Gerrard, and Gareth Bale and Eden Hazard.

Those who win it are practically guaranteed to go to achieve greater things in their careers. But is there something fundamentally wrong with the award and how its nominees are determined?

Any player involved in English football that is 23 years old or under is eligible to win it, but by that stage of their career, a player is just beyond what you’d call their early peak and should be an established member of the first team, if not, they’re just not very good, so it seems a weird cut off point for nominations.

The latter was also nominated for the senior award, which makes one wonder if they should be considered ‘young’ if they are good enough to win the big one. But that’s perhaps a separate issue.

Sterling turned 24 last December, has spent the last six seasons as an established first team player and was first nominated for this prize in 2014 — five years ago. By the PFA’s criteria, he is eligible and is without a doubt the best player in that age bracket, but is there any need to recognise him as such?

Bernardo Silva, meanwhile, is also 24, although his birthday fell on 10 August, the opening day of the Premier League season. Which begs the question if he is actually eligible or not. Again, there is no doubting he is certainly good enough, but he is already well established as a first team player having arrived as a ready-made product from Monaco two years ago.

This is hardly the most pressing issue facing football today, but it does raise questions when someone like Aaron Wan Bissaka doesn’t make the final list. The Crystal Palace full-back has been a revelation this season, displaying a level of attacking threat and defensive solidity beyond his years. It almost seems churlish not to give recognition to the kind of campaign he has had just so a star name can be inscribed on the plaque.

Not one to complain without offering a solution, this writer has some suggestions that could improve the YPOTY prize and allay some of the public discontent that routinely comes with the annual announcement.

For one, it would seem to me that 21 or under would be a much more appropriate cutoff point. The pool of players capable of winning it would be greatly reduced, but it seems a natural age bracket confine it to.

It should realistically be about rewarding young players making a breakthrough in their fledgling careers, so another option could see it changed to an American style Rookie of the Year accolade, which would essentially restrict it to a player’s first full season as a first-teamer.

Let’s say the age limit isn’t changed, then there are some minor tweaks that could be made that would still improve the decision-making process. For instance, any player nominated for the senior prize should not be considered for YPOTY. Simple.

There might also be merit in restricting any given player to two nominations in their career, or not nominating a player again who has won the award previously. Ryan Giggs was the first footballer to win it twice, followed later by Robbie Fowler, Wayne Rooney and Dele Alli.

There is still a certain prestige to winning the award and that should not be diminished by faulty criteria. If Sterling or Silva win the award, it will feel somewhat pointless and unnecessary. If they don’t, football fans will wonder why they were even nominated in the first place, when everyone knows they’re too good not to win it.

End of year awards come with all manner of fruitless debate one way or the other, and I’m not even sure we should devote as much time to arguing over them as we already do. But the footballers who deserve to be recognised for their ability and success should be.

Read: How Klopp’s side have now evolved into Liverpool Mark II

See Also: Why Man United’s incompetency will keep them from competing for years to come