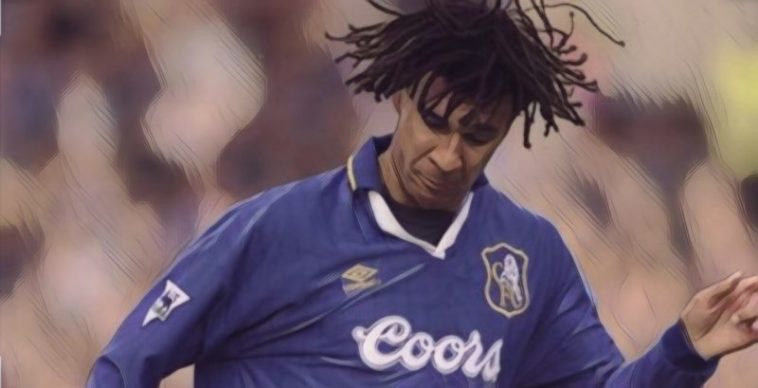 Our latest feature looks back at the leading players from the 1995/96 season, a campaign which saw Newcastle blow a huge lead at the top of the Premier League as Manchester United’s ‘kids’ proved a certain Alan Hansen wrong to win a domestic double.

Other notable moments include the arrival of a certain Dennis Bergkamp in north London, whilst the English public was eagerly awaiting the arrival of a home European Championships as football prepared to come home.

Following on from our previous editions we’re looking back at the best XI’s from each Premier League season, here is the PFA Team of the Year for the 1995/96 campaign:

A series of blunders during David James’ early seasons at Liverpool saw the goalkeeper christened ‘Calamity James’, but the England international enjoyed a strong season during 1995/96 to be named in the divisional Team of the Year.

The campaign is widely remembered for an epic title race between Newcastle and Manchester United, but Liverpool were contenders for much of the season and boasted the second best defensive record in the division, with James starring as the last line of defence.

The Merseyside club eventually finished third in addition to losing the FA Cup final, though James was the Reds only representative in the season’s Team of the Year.

Quite bizarrely, Gary Neville was the only Manchester United player voted into the Premier League’s Team of the Year despite Sir Alex Ferguson’s side completing a second domestic double in just three seasons.

Neville had broken into the side the previous season before establishing himself as an undisputed first-choice at right-back in 1995/96, making 39 appearances in all competitions and earning senior international recognition.

The full-back’s performances saw him named in the PFA Team of the Year for the first time – one of six inclusions throughout his career – as well as becoming the youngest first-choice member of England’s Euro ’96 side.

Arsenal fans of a younger generation may find it hard to envisage but defence was once the Gunners’ greatest strength in the early seasons of the Premier League, the club’s famous back five marshalled superbly by commanding captain Tony Adams.

The north London side – despite the record arrival of Dennis Bergkamp – managed only a fifth-placed finish in the Premier League, though their record of just 32 goals conceded was the best in England’s top tier.

Adams was voted by his fellow professionals into the division’s best XI, one of three times the centre-back was included during the Premier League era.

Aston Villa enjoyed a fine season under the guidance of Brian Little during the 1995/96 campaign, emerging as early title contenders and securing silverware with League Cup victory over Leeds at Wembley.

Only Arsenal conceded fewer goals in the Premier League than Villa, whose miserly defence contained the impressive Ugo Ehiogu, who was one of two players from the Midlands side recognised by their peers.

The centre-back’s dominant performances saw him make his senior England debut against China in May 1996, though was left out of the final squad for the summer’s home European Championships.

Ehiogu went into coaching after his playing career ended and tragically passed away aged just 44 in 2017 after taking a session at Spurs training ground.

The second member of the Aston Villa defence to be named in the PFA Team of the Year, Wright enjoyed an impressive debut season at Villa Park to be named amongst the Premier League’s finest.

Wright made 40 appearances in all competitions – scoring twice including a stunner at Middlesbrough – and starred as Villa finished finished fourth and won the League Cup, a big contribution from a player remembered as one of the Premier League’s shortest ever players.

Steve Stone broke into the Nottingham Forest side in the early nineties before establishing himself as a firm fans’ favourite at the City ground, a winger blessed with excellent crossing and shooting ability .

Stone had overcome three separate leg breaks before finding his feet at the top level and starred for Forest during the 1995/96 season, becoming increasingly influential following the summer departures of key figures Stan Collymore and Lars Bohinen.

The winger made 34 league appearances and scored seven goals, making his senior debut for England in October and later earning inclusion in Terry Venables’ Euro ’96 squad.

Like the aforementioned Ehiogu, Lee was another player who just missed the final cut for the European Championships despite a season with Newcastle that saw the midfielder included in the Team of the Year.

Lee scored eight league goals – including winners against reigning champions Blackburn and Southampton – and was a pivotal central presence for Kevin Keegan’s entertaining side, the Magpies racing into a seemingly unassailable lead before crumbling under the pressure.

Lee was named as the league’s Player of the Month for November, before being voted into the Premier League’s best XI at the end of the season.

Ruud Gullit became one of the Premier League’s first foreign marquee arrivals ahead of the 1995/96 season, where after a brief period of adaptation the Ballon d’Or winner began to demonstrate his undoubted class.

The Dutchman’s arrival at Stamford Bridge proved to be the catalyst for a period of success in west London, Gullit named as runner-up for the FWA Footballer of the Year after scoring six times for Glenn Hoddle’s side.

Hoddle’s departure at the end of the season to take charge of England saw Gullit appointed player-manager at the Blues, attracting a host of world class talents to the capital and becoming the first foreign manager in history to win the FA Cup.

Ginola reportedly ignored overtures from Real Madrid and Barcelona to sign for Newcastle in the mid-nineties, where he would form part of one of the most flamboyant sides in the division’s history.

His debut season saw the Frenchman star as part of Keegan’s uber-attacking line up, being named in the PFA Team of the Year after scoring five goals and providing a further eight assists.

The fleet-footed winger simply terrorised full-backs when in full flow, gliding past challenges with an effortless ease to become one of the division’s finest, all with signature style and swagger.

Ferdinand arrived at St James’ Park as a replacement for the departed Andy Cole ahead of the season, signing in a £6m deal after scoring 60 goals over the past three seasons for Queens Park Rangers.

The marquee arrival wasted little time in winning the hearts of the adoring Geordie faithful, scoring prolifically during his maiden season on Tyneside to fire Newcastle’s title challenge and be included in the Team of the Year.

Ferdinand’s 25 league goals proved not enough to deliver the title to Newcastle, though his performances were recognised at the end of the campaign as he was named as the PFA Player’s Player of the Year.

How QPR shaped Sir Les: ‘The secret to having it all is knowing that you already do.’

Alan Shearer’s final season as a Blackburn player saw the forward win the Premier League’s Golden Boot for a second successive season, scoring 31 goals despite the club’s dismal defence of their league title.

Shearer’s prolific campaign included a single season record of five hat-tricks, whilst he also registered more than 30 league goals for the third consecutive year – a feat no player in Premier League history has ever managed more than once.

The forward later starred for England during the summer’s European Championships on home soil, winning the tournament’s Golden Boot and finishing the year third in the rankings for the FIFA World Player of the Year and Ballon d’Or awards.