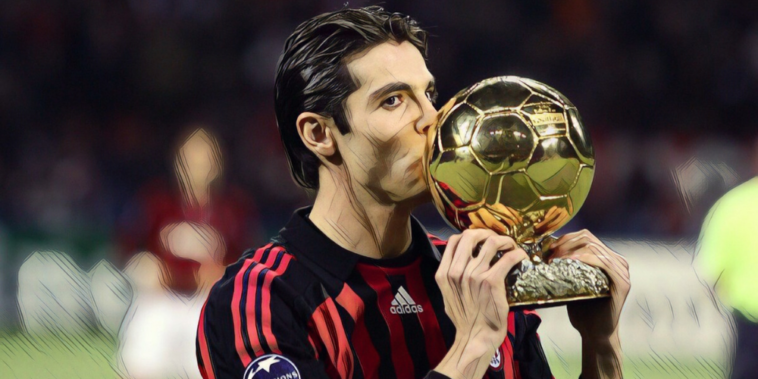 For football fans of a certain age, it is perhaps difficult to remember a time before Lionel Messi and Cristiano Ronaldo dominated the game, the two sporting giants having set unprecedented standards to become recognised as two of the best players of all-time.

Messi’s coronation as the 2021 winners means that the Argentine and Ronaldo have – aside from Luka Modric’s surprise victory in 2018 – shared a duopoly on the game’s greatest individual honour, with the pair having won the Ballon d’Or 12 times between them in the past 13 editions of the prestigious accolade.

We’ve decided to look back at a time when the crown as world football’s finest was an open competition, remembering the last five players to win the Ballon d’Or before the dominant era of Messi and Ronaldo:

The last winner before the duopoly of Messi and Ronaldo, Kaka reigned as the world’s best player for a brief but brilliant time during a hugely successful spell at AC Milan.

The Brazilian was the creative heartbeat of a Milan side that reached two Champions League finals in three seasons under the guidance of Carlo Ancelotti, and it was the playmaker’s displays in Europe’s leading competition that ultimately led to his coronation as the world’s best player in 2007.

Kaka finished as the top scorer in the Champions League as Milan beat Liverpool to be crowned champions of Europe in Athens, scoring ten times in the club’s run to the showpiece – the Italian giants exacting revenge for their dramatic final defeat to the same opponents in Istanbul two years earlier.

Amongst his highlights was a scintillating two-goal performance in the semi-final at Manchester United, before netting again in the return leg to secure Milan’s passage to the final.

Kaka finished the season with 18 goals in all competitions and later inspired the Rossoneri to Club World Cup success, winning the Golden Ball as the tournament’s best player after Milan beat Boca Juniors in Japan.

He was named as the winner of the Ballon d’Or and became the fourth Brazilian to win the prize, finishing ahead of runner-up Messi and third-placed Ronaldo as the duo’s influence began to grow.

Defensive players often struggle to receive the same acclaim as their attacking counterparts, but Fabio Cannavaro bucked the trend to be crowned as the winner of the Ballon d’Or in 2006.

Cannavaro was a Real Madrid player at the time he was named as Europe’s finest player, but his award was largely due to his performances in the shirts of Juventus and the Italian national team.

The centre-back formed part of a formidable Juventus defence that contributed towards the club’s second successive Serie A title, before captaining Italy to the game’s greatest honour after lifting the World Cup that summer.

Major international tournaments can often have a huge influence on the voting for individual honours, and Cannavaro’s flawless displays at the heart of the Azzurri defence saw the defender finish ahead of compatriot Gianluigi Buffon and Thierry Henry in the race for the Ballon d’Or.

Italy conceded just one goal on their way to the final, before beating 10-man France on penalties in Berlin after Zinedine Zidane was memorably sent off for a head-butt on Marco Materazzi.

Before Messi and Ronaldo was the mesmerising magic of Ronaldinho, the care-free footballer who waltzed into one of the world’s biggest football clubs and changed the course of their history – all with a signature smile upon his face.

Barcelona beat off competition from Europe’s elite to sign the playmaker from Paris Saint-Germain, and it proved an inspired piece of business as the Brazilian developed into the best player in world football.

Ronaldinho arrived at a Barcelona side without a major trophy in four seasons before inspiring the club to a wealth of major honours, including back-to-back league titles and the 2006 Champions League.

The first of those league titles saw the playmaker win the Ballon d’Or for his electric performances at the Camp Nou, finishing comfortably ahead of Frank Lampard and Steven Gerrard in the voting to become the third Brazilian to win the honour.

Ronaldinho was simply untouchable at his very best, with a moment at the home of Barcelona’s arch-rivals in November 2005 perhaps etching the star into football folklore forevermore.

His two-goal display in a 3-0 destruction of Real Madrid at the Bernabeu led to an incomprehensible standing ovation from the home support, the ultimate salute to a player who was undoubtedly the best on the planet at his peerless peak.

The mid-noughties saw Andriy Shevchenko reign as arguably the most feared forward in European football, the Ukrainian the focal point of an AC Milan side which challenged for major honours both at home and on the continent.

Shevchenko was crowned as the winner of the Ballon d’Or after inspiring Milan to the Serie A title in 2004, finishing as the leading scorer in Italian football with 28 goals in all competitions for the Rossoneri.

The forward had twice previously finished third in the race for the game’s greatest individual honour, before capping a devastating seven-season spell at the San Siro by being named European Footballer of the Year.

Shevchenko finished ahead of runner-up Deco – who had helped Jose Mourinho’s Porto to a treble – and third-placed Ronaldinho in the voting, with Arsenal’s Thierry Henry perhaps unlucky to finish fourth after helping the Gunners to an ‘Invincible’ season.

The Czech was one of the classiest players in European football at the turn of the millennium and claimed the Ballon d’Or award in 2003, the midfielder having starred as Juventus retained the Italian title and reached the final of the Champions League.

Nedved scored 15 goals in all competitions – the best haul of his Juventus career – and played an influential role in their European run, scoring five goals including vital knock-out stage interventions against both Barcelona and Real Madrid.

Marcello Lippi’s side would ultimately lose on penalties to AC Milan in the first all-Italian Champions League final, Nedved unable to make the difference in a goalless snooze-fest at Old Trafford.

His career-best performances – thriving in a more central role behind the Turin side’s forward players – saw the playmaker named as European Footballer of the Year, Nedved finishing ahead of Arsenal’s Thierry Henry and Milan’s Paulo Maldini to become the sixth Juventus player to win the Ballon d’Or.