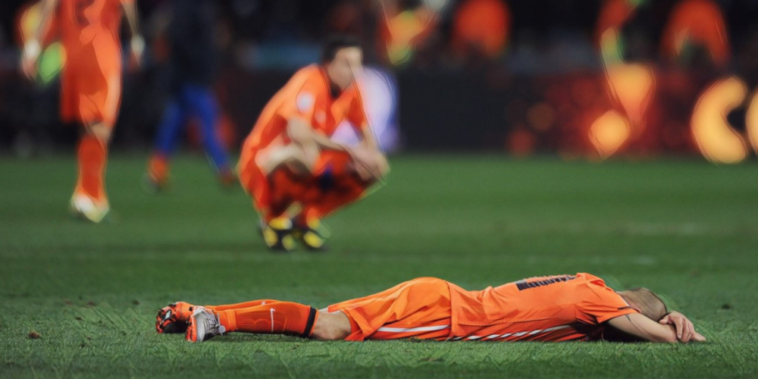 The Netherlands are one of the world’s most respected football nations, one which gave birth to the rise of Total Football and who have had an indelible mark on the game.

For all of the brilliant footballers the Dutch have produced however, a World Cup title has remained elusive. No nation has featured in more World Cup finals without claiming the ultimate prize, with the Netherlands beaten finalists in 1974, 1978 and 2010.

The most recent of those saw Holland lose out in extra-time to Spain, as hopes of becoming world champions for the first time faded in South Africa.

With the 2022 World Cup underway, we remember the Dutch side that suffered World Cup final heartbreak in 2010.

Stekelenburg became the Dutch number one following the retirement of Edwin van der Sar and travelled to South Africa for his first tournament as first-choice goalkeeper.

He impressed during the Netherlands’ run to the final, including a superb save from Kaka with his side trailing as the Dutch came from behind to beat Brazil in the quarter-final. Stekelenburg shone again in the final and made strong stops from Sergio Ramos and Cesc Fabregas, but could do nothing about Andres Iniesta’s winner for Spain.

After a four-year absence from the national side he returned for the Dutch in 2016. Five years later, he was first-choice at the delayed Euro 2020 following an injury to Jasper Cillessen. Aged 38, Stekelenburg retired from international football following the tournament, having won 63 caps.

Gregory van der Wiel was the youngest member of the Dutch squad in South Africa, following the right-back’s exciting emergence at Ajax. He won the Dutch Football Talent of the Year award in 2009/10 and started four of the Netherlands’ fixtures at the World Cup.

At club level, he won two league titles with Ajax before a move to Paris Saint-Germain. Van der Wiel won 12 trophies across just four seasons at PSG, but struggled for fitness and favour during his latter time with the club.

Short spells with Fenerbahce, Cagliari and Toronto FC followed, before he was released from the latter after an altercation with coach Greg Vanney. He announced his retirement a year later, aged just 32.

John Heitinga won 87 caps for the Netherlands during an international career that lasted almost a decade, with the defender featuring in every game of the Dutch’s campaign in South Africa.

He became just the fifth man to be sent off in a World Cup final, after being dismissed for a foul on match-winner Andres Iniesta in extra-time.

Heitinga had come through the academy set-up at Ajax and won two Eredivisie titles with the club, before spells at Atletico Madrid, Everton, Fulham and Hertha Berlin. He was named as Everton Player of the Season for the 2011/12 campaign and proved a popular figure across five seasons at Goodison Park.

Mathijsen was among the most experienced members of the Dutch side and partnered Heitinga at centre-back for the final defeat.

He started each of the Netherlands’ fixtures at the tournament, having featured for every minute of their World Cup qualification campaign. The defender’s best period of club football came at Hamburger SV, while he also had spells at Willem II, AZ, Malaga and Feyenoord during his career.

Mathijsen was solid in the Johannesburg final, but was unable to help the Dutch over the line to a maiden World Cup triumph.

Just four players have ever made more appearances for the Netherlands, with Van Bronckhorst captaining the side for their World Cup campaign in what proved his farewell to the international stage.

The left-back scored a stunning goal in the semi-final win over Uruguay, as he hit a thumping effort from distance into the far corner. The final – in which he was substituted for Edson Braafheid in extra-time with the game goalless – was his last match as a professional, having called time on his club career at Feyenoord at the end of the 2009/10 campaign.

Who remembers this semi-final stunner from South Africa 2010?

He retired having won 106 caps for the national side and having won league titles at Rangers, Arsenal and Barcelona.

Mark van Bommel lived up to his reputation as the enforcer of the Dutch engine room, with the midfielder setting the tone for what proved a bruising final encounter. Van Bommel was booked for a crude challenge on Andres Iniesta, as referee Howard Webb issued 14 yellow cards and one red in a bad-tempered decider.

Van Bommel proved a serial winner across his career in Europe, as he won the Eredivisie (PSV), La Liga (Barcelona), Bundesliga (Bayern Munich) and Serie A (AC Milan) during a club career spent at some of the continent’s top clubs.

He won a total of eight titles across those spells, while he also lifted the Champions League at Barcelona and had the honour of becoming Bayern Munich’s first foreign captain. Van Bommel missed out on the major prizes in 2010 however, as he lost both the Champions League final with Bayern and the World Cup final with the national side.

A more than willing accomplice to Van Bommel as the Dutch chose to take on tiki-taka with a rather uncompromising approach. De Jong’s final is best remembered for a chest-high karate kick challenge on Xabi Alonso, for which he somehow escaped a red card despite the flurry of bookings.

De Jong spent more than a decade patrolling the Dutch midfield, providing bite in an anchor role. After spells at Ajax and Hamburg, he signed for Manchester City and formed part of the team that won the FA Cup (2011) and Premier League (2012).

De Jong was substituted in extra-time after his early caution, with Rafael van der Vaart on as his replacement. He also formed part of the Netherlands team that finished third at the 2014 World Cup in Brazil.

The inspiration behind the run to the final, the 2009/10 campaign proved some season for Sneijder.

The midfielder starred as Inter Milan won a Serie A, Coppa Italia and Champions League treble, before emerging as one of the stars of the tournament in South Africa. Sneijder scored five goals – the joint-most at the World Cup alongside Thomas Muller, Diego Forlan and David Villa – including both in the quarter-final comeback win against Brazil.

He helped guide 🇳🇱@OnsOranje to back-to-back podium finishes at the #WorldCup, too 💪

He was arguably the most influential player at the World Cup and won the Silver Ball, with Forlan taking the main prize. That he was omitted from the 2010 Ballon d’Or podium remains a source of injustice for some, even given the trio of Lionel Messi, Andres Iniesta and Xavi ahead of him.

Sneijder’s influence was such that he was named as man of the match in six of the Netherlands’ 11 games at Euro 2008 and the 2010 World Cup. He retired as the most capped player in Oranje history, with 134 appearances for the Dutch.

Robben had a delayed start to the 2010 World Cup due to a hamstring problem, but his return helped inspire the Dutch to the final. He scored on his first start in the last-16 win over Slovakia and netted his second of the tournament in the semi-final.

Robben was perhaps the Netherlands’ best performer in the final as he gave Carles Puyol a torrid time, but missed a clear chance after being denied by Iker Casillas.

He won almost a century of caps for the national side and was one of the great wingers of his generation. At club level, he won league titles at PSV, Chelsea, Real Madrid and Bayern Munich, becoming one of the most decorated players in the latter’s history.

He scored 144 goals in 309 appearances for Bayern, a period which saw Robben win eight Bundesliga titles and the Champions League among his honours.

An underrated component of this side, Kuyt was the work-horse that complimented the creative flair of Robben on the opposite flank.

After emerging as a prolific presence at Feyenoord, Kuyt signed for Liverpool where he was transformed into a marauding wide-man whose hard running was appreciated by both teammates and supporters.

He started all seven fixtures for the Netherlands at the 2010 World Cup, scoring once and providing three assists. Kuyt is one of just eight players to have won 100+ caps for the Dutch and scored 24 goals in his 104 appearances for the Oranje.

He was substituted in the final for Eljero Elia after an ineffective performance.

Robin van Persie led the line for the Netherlands and cut a frustrated figure as he was starved of service in the final defeat.

He scored just once at the World Cup – in the group stage win against Cameroon – in a largely disappointing campaign for the forward. Van Persie’s fortunes improved at the 2014 edition, as he scored four goals – including becoming the first player since 1966 to score with his left foot, right foot, and head, as well as scoring from a free kick and a penalty kick at a World Cup.

Among his haul included a sensational diving header against Spain, as the Netherlands exacted revenge for their 2010 defeat with a 5-1 thrashing of the world champions.

Van Persie is the all-time record goalscorer for the Netherlands, having netted 50 goals in 102 appearances.