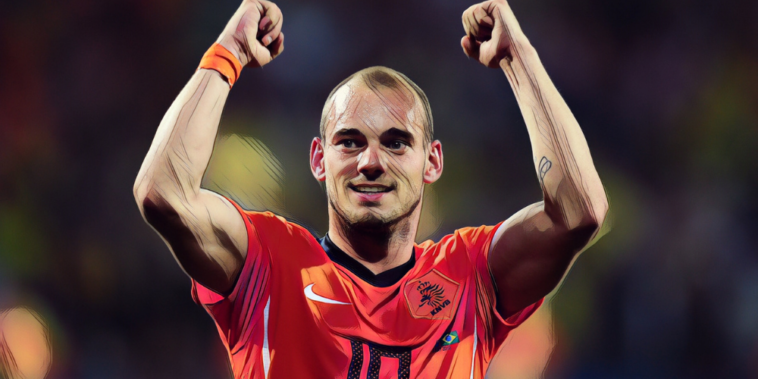 For a short period as the noughties faded into 2010s, there were few midfielders in world football as influential as Wesley Sneijder.

Sneijder’s talent was honed in the player production machine that is the Ajax academy, an environment that produces an almost endless amount of both quality and quantity.

Inducted into the hallowed system at the age of seven, he spent much of his early life balancing his Ajax apprenticeship with street football in the Netherlands, where the latter challenge of contesting small-sided games with kids of all ages offered a different development angle to the professional set-up.

For the football-obsessed youngster the lessons learned in the Amsterdam cages would last the test of time, with Sneijder telling Player Development Project about his upbringing on the capital’s streets.

“Street football is much tougher than training sessions at a club.

“You play with older kids at different levels. There is no referee so it is the ‘law of the jungle’ that applies. When you got tackled hard or were bullied, it didn’t matter that you were youngest or hurt, it was important to keep going.

“Street football teaches you to be rough-and-ready, smarter and creative in your solutions on the field.”

Ajax’s innovative system ensures that the same principals apply across all age groups, with Sneijder – whose brothers Jeffrey and Rodney were also Ajax academy players – rising through the ranks.

The club’s encouragement of expression proved a fine fit for the emerging midfielder, who flourished amid freedom in the 4-3-3 system implemented at each age group.

His break came following a recommendation from youth coach Danny Blind, the club great having advocated Sneijder’s promotion to the senior side under Ronald Koeman.

He made his debut as a teenager during a 6-0 win against Willem II in February 2003 and failed to look back, soon establishing himself amongst Koeman’s permanent plans.

Sneijder’s impact was such that he made his international debut for the Netherlands just two months after his first appearance for Ajax, with his second season proving a breakthrough campaign as the 2003/04 Eredivisie title was secured.

Flourishing alongside fellow prospects in Rafael van der Vaart, Zlatan Ibrahimovic and Nigel de Jong, he was named as division’s best young player and it was not long before Europe’s elite began to notice his name.

Sneijder’s five seasons with Ajax saw the creative midfielder provide 103 goal involvements in just 180 appearances across all competitions, including netting 22 goals during a 2006/07 season that attracted the interest of Real Madrid.

It was a move that seemed the perfect step for a player brimming with potential, but Sneijder’s two-season spell in the Spanish capital proved one unfulfilled.

The increased attention from representing world football’s most glamorous behemoth came with distractions and Sneijder admits he was to blame for a deterioration in performance.

His autobiography paints a picture of a young man who fell victim to temptation, speaking on his use of alcohol and how his technique compensated for a drop in his physical deterioration in Madrid.

The Dutchman scored nine goals and provided seven assists as Real clinched La Liga during his maiden season, but after returning from a scintillating Euro 2008 his performances became increasingly poorer.

Sneijder had been the sparkling conductor of a Dutch side that had thrilled during the summer’s major tournament, with the midfielder the architect behind thrashings of Italy and France before a shock exit to Russia in the quarter-finals.

Real’s relinquishing of the league title to an emerging Barcelona force sparked a second wave of the club’s Galactico policy, with Sneijder one of the names to make way as the likes of Cristiano Ronaldo, Kaka, Xabi Alonso, and Karim Benzema arrived at the Bernabeu.

Inter Milan secured his signing for a cut-price fee of just €15m, as Jose Mourinho sought the final piece in his puzzle at the San Siro.

Inter had been built on solid foundations with the likes of Lucio, Esteban Cambiasso and Javier Zanetti forming the spine of the side, but Sneijder’s arrival provided the imagination and vision to perfect their devastating counter-attack.

Released from restraints, Sneijder evolved into one of the most effective and elegant attacking midfielders in European football, his invention and industry instantly endearing him to the Nerrazzuri supporters on the Curva Nord.

Inter were the dominant force in Italian football and Sneijder’s arrival only enhanced that status, though the true effect of his impact was found on the European stage.

The midfielder’s penetrative passing between lines proved crucial to the club’s Champions League campaign, with Sneijder starring during Inter’s run through the competition’s latter stages.

Sneijder’s raking pass freed Samuel Eto’o to score the winner as Chelsea were beaten at Stamford Bridge in the last-16, before scoring one and providing another as CSKA Moscow were defeated 2-0 on aggregate in the next round.

Awaiting in the semi-finals were holders Barcelona, with the first leg resulting in a defining performance from Sneijder in the atmospheric setting of a raucous San Siro.

Pedro’s goal had handed the visitors the lead, only for Sneijder to lead the fightback as Inter’s clinical counter-attack turned the tie around.

The midfielder fired home an equaliser to level the score before the break, whilst he continually looked to devise openings for Diego Milito and Samuel Eto’o, registering the assist for the latter’s third goal with a miscued header.

A defensive clinic in the second leg sealed Inter’s place in the final, where Bayern Munich stood in the club’s path of a first European Cup success since the mid-sixties.

Once again the cutting edge of Inter’s number ten proved pivotal on the biggest of stages, weighting a pass into the path of Milito to open the scoring as a 2-0 win sealed Champions League success and coronated Mourinho’s men as Italy’s first ever treble winners.

The potential that had previously only threatened to escape was now bursting from the seams, with Sneijder emphasising his status as one of Europe’s elite at that summer’s World Cup.

Sneijder’s excellence at the European Championship two years earlier had showcased what he can provide on the grandest of occasions, and he arrived in South Africa as one of the most influential footballers on the planet.

Five goals catapulted the Oranje through the tournament and into the decider, before Andres Iniesta’s extra-time goal saw the Netherlands succumb to Spain’s golden generation in the final.

The final itself proved an ugly affair as the cynical Dutch sought to disrupt La Roja’s rhythm, with many left wondering how the result could have differed had the Netherlands not abandoned their principles and allowed players of Sneijder’s ilk to go toe-to-toe with the Spanish.

Sneijder was awarded the tournament’s Silver Ball and found himself narrowly outside the individual accolades once more during the year’s Ballon d’Or ceremony, contentiously ousted from the podium by Lionel Messi, Iniesta and Xavi.

The campaign proved the short but sweet zenith of Sneijder’s story, as he spent the next three seasons with Inter without recapturing the form that made him fleetingly one of football’s finest.

He moved to Galatasaray following a contract dispute with Inter in January 2013, turning down overtures from the Premier League and PSG to embark on a new challenge in Turkey.

Still just 28 upon the time of his arrival in Istanbul, he proved a cut-above the Süper Lig even if injuries and a self-confessed lack of thorough dedication had begin to catch up with him.

Two league titles in three seasons and a series of spectacular goals made Sneijder a hero at Galatasaray, with the midfielder amongst the most naturally gifted footballers to have adorned the club’s colours in the modern era.

His final campaign for the club saw him register a league-leading 15 assists, before short spells at Nice and Al-Gharafa brought a close to the career of Dutch football’s most capped footballer of all time.

The best of Sneijder proved all too brief, but he was joyous viewing when operating at his optimum. His flawless technique and innate two-footedness allowed him to unlock opposition defences at will, possessing an effortless ability to thread open backlines with measured passes of precision.

For Sneijder, a footballer crafted in the cages before being made in Milan, his was a career of no regrets, even if his time proved only a flirtation with genuine greatness.