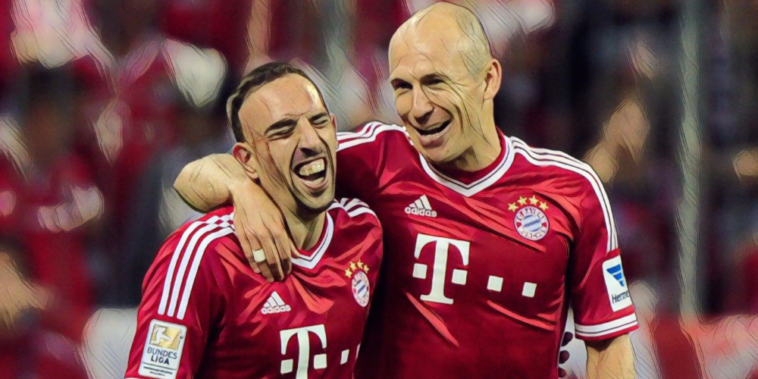 For a decade full-backs often travelled to Bavaria with a sense of dread and trepidation, faced with arguably their most difficult assignment of the modern era.

Bayern Munich has rarely been a happy hunting ground for clubs both in the Bundesliga and further afield, but in a period in which Franck Ribery and Arjen Robben rampaged down the club’s flanks in stunning synchronisation, it became a truly daunting prospect.

Ribery and Robben are perhaps not the traditional example of a footballing partnership, stationed on opposing sides of the pitch and rarely drifting within touching distance of one another.

It is difficult to mention one without the other however, their time in tandem seeing the devastating double act christened ‘Robbery’ by the Bayern Munich masses, each infatuated with a wing-pairing who inspired a decade of domestic dominance.

Ribery was the first to arrive, having bounced around a succession of clubs in his native France – alongside a short stint in Turkey with Galatasaray – before rising to prominence in the colours of Marseille.

Bayern, in search of a replacement for retiring fan favourite Mehmet Scholl, invested a record fee in the recently-crowned French Player of the Year, with Ribery handed Scholl’s vacated number seven shirt.

His impact was almost instant. Ribery scored his first league goal on his second Bundesliga appearance, chipping a confident penalty during a 4-0 win at Werder Bremen.

It was the start of a season that culminated in both team and individual accolades, with the marquee arrival named as Germany’s Footballer of the Year after inspiring Bayern to a domestic double.

Ribery finished the campaign with 19 goals and 20 assists across all competitions, delighting crowds with his close control, acceleration and bursts through opposition challenges.

Operating primarily from the left-wing as inverted wingers became more commonplace in the modern game, he was granted a licence to drift inside and create goalscoring openings.

Ribery had handled the step into an elite side and continued to go from strength to strength, despite a disappointing second season for Bayern who relinquished the Bundesliga title to Wolfsburg.

In need of further reinforcements, a deal was struck to sign Robben from Real Madrid.

The Netherlands international had won league titles in his homeland, England and Spain before crossing to Bavaria, but was squeezed out at the Bernabeu following the second coming of the Galactico era under Florentino Perez.

Real’s mistake proved Bayern’s gain and set in motion one of modern football’s most iconic attacking pairings. With Robben and Ribery stationed on opposite flanks, Bayern possessed a potent pairing who would torment opposition sides for a decade.

Louis van Gaal’s side had began the 2009/10 campaign without a win in three before the introduction of Robben to the side, scoring twice after being introduced as a substitute on his debut against Wolfsburg.

Bayern picked apart the defending champions in ruthless fashion on the counter-attack, each of Robben’s goals assisted by Ribery as the duo burst away on the break, their speed leaving even their own teammates gasping for air.

“I couldn’t keep up with them,” Mario Gomez later said. Neither could Bundesliga defences.

Their first season in tandem saw Bayern win another domestic double, but hopes of a historic treble were ended after defeat to Inter Milan in the Champions League final.

The loss to Jose Mourinho’s side was a disappointment, but Bayern had returned to the summit of European football and few had played a greater role than Robben and Ribery.

The former had scored stunning goals as Fiorentina and Manchester United were eliminated on away goals in the knockout stages, the first a goal that would soon become his trademark, dancing infield before unleashing a stunning strike from distance into the top corner.

Robben’s strike at Old Trafford was similarly special and teed up by his attacking accomplice, a floated corner-kick from Ribery lashed in on the volley from the edge of the penalty area.

Just as Ribery had two seasons earlier, Robben’s first campaign in Bavaria ended with the Footballer of the Year accolade, having scored 23 goals across all competitions for Bayern.

Riberty’s contribution was less spectacular, but a combined haul of 53 goals and assists between the two wide players highlighted their influence on Bayern’s double-winning side.

Despite Jurgen Klopp’s Borussia Dortmund briefly threatening Bayern’s domestic dominance, the formation of the Robbery partnership proved the catalyst behind a golden era for the German giants.

The 2012/13 season proved arguably their best in intoxicating harmony as Bayern – now under the guidance of Jupp Heynckes – conquered all before them.

Bayern reclaimed the title from Dortmund courtesy of an emphatic 25-point winning margin, before beating Stuttgart to claim the DFB-Pokal in Berlin.

It was in Europe, however, where the legend of Robben and Ribery reached new levels.

Bayern cruised through the group stages before defeating Arsenal over two legs in the last-16, a clash with Juventus in the quarter-finals expected to provide a challenge.

Across two legs the Bavarians scored four goals without conceding, before being drawn to face Barcelona in the semi-finals. In a performance of intensity and ruthless attacking edge, Bayern thrashed the Catalan side 4-0 in the first leg, as Robben and Ribery tormented a vulnerable defence with their movement and speed.

It was a performance rarely seen as such a late stage of Champions League competition, a mismatach as Bayern’s verve and vigour blew Barcelona apart.

Robben scored his side’s third after beating Jordi Alba inside the box, as Bayern inflicted Barcelona’s heaviest European defeat since losing by the same scoreline to Dynamo Kyiv in 1997.

The second leg was similarly chastening for the Catalans, Robben scoring the opener in a 3-0 success at the Camp Nou, progressing to the final after a record Champions League semi-final aggregate win.

Robben’s goal was another for his ever expanding collection of signature strikes, whilst Ribery finished the clash with a pair of assists as Bayern ran riot.

The final was an all-Bundesliga meeting with Borussia Dortmund at Wembley, as Bayern sought redemption after losing the previous season’s showpiece to Chelsea.

Robben had missed a crucial penalty in the loss to the west Londoners, but exorcised his demons with a late winner to crown Bayern champions of Europe and Germany’s first treble winners.

It was Ribery who again provided the assist as the game neared towards extra-time, controlling a long pass forward before flicking the ball into the rampaging Robben’s path to roll home.

The Bavarians were the continent’s finest footballing outfit and the inspiration behind their challenge had come from wide, Robben and Ribery providing the pace and penetration on the flanks, each drifting dangerously infield in search of greater involvement and goals.

Robben had struggled with injury issues for much of the campaign but came alive during Bayern’s run to Champions League success, finishing the season with 28 goal involvements from just 31 appearances.

Ribery had proven the creative force with 23 assists alone in all competitions, ending 2013 on the Ballon d’Or podium behind Cristiano Ronaldo and Lionel Messi – his third-place finish later claimed an ‘injustice’ in the eyes of the Frenchman himself.

Silverware continued to flow at an astonishing rate as Bayern embarked on a period of utter dominance, winning each of the next seven Bundesliga titles in succession before Robben and Ribery waved farewell to the club in 2019.

Fittingly, their farewell saw both involved in another silverware triumph. Needing to win to secure the title against Eintracht Frankfurt on the final day of the Bundesliga season, each came off the bench to score their final Bayern goals – just six minutes apart – in a 5-1 win.

Eight league titles, a Champions League trophy and five DFB-Pokal triumphs were shared during a glittering career in unison, scoring a combined 268 goals and providing 283 assists during their time in Bayern colours. But for the notable injuries suffered by each, those totals would have swelled to even greater figures.

Bayern Munich is one of the most illustrious names in world football, a club of gargantuan size who regularly dine at the top table of European football. In arguably the most sustained period of success in their history, it was the dynamic and devastating partnership of ‘Robbery’ that inspired their greatest nights.