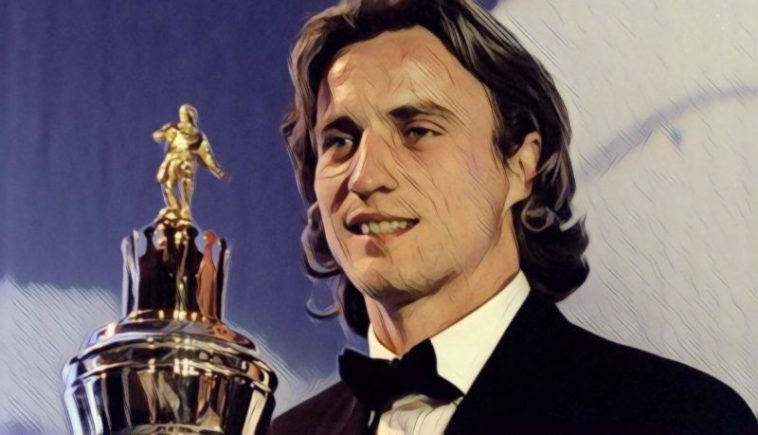 In the midst of football’s current suspension we’re continuing our look back through the footballing archives and the Player of the Year awards, the PFA honour often regarded by many as the greatest individual recognition in England’s top tier.

Our latest offering revisits a decade that would change the landscape of football forever, the nineties seeing the introduction of the Premier League and with it the creation of world football’s biggest domestic league.

The nineties is fondly remembered for the first foreign influx into English football, with many of the league’s most iconic stars having been at their very best during a memorable era.

Here is every PFA Player of the Year winner from the 90’s:

Platt signed for Aston Villa in 1987 after learning his trade during four seasons in England’s fourth tier with Crewe Alexandra, helping the club bounce back to the top flight during his debut season at Villa Park.

After maintaining their top tier status a vastly improved Villa side embarked on a surprise title challenge during the 1989/90 campaign, with Platt at the heart of his side’s success.

The midfielder scored 24 goals in all competitions for Graham Taylor’s side to be named as the PFA Player of the Year, his goalscoring exploits recognised with a first inclusion in the England squad ahead of that summer’s World Cup.

Platt developed a reputation as a fine goalscoring midfielder and combined tenacity with a knack of timing his runs to perfection, later having spells with the likes of Juventus, Sampdoria and Arsenal – winning a league and cup double with the latter in 1998.

Hughes became the first player in history to win the PFA Player of the Year award on more than one occasion after being crowned the winner in 1991, the Welsh forward having also been recognised as the division’s best two seasons earlier.

‘Sparky’ was named as the Player of the Year after a season in which he scored 21 goals in all competitions for Manchester United, including both goals as Sir Alex Ferguson’s side beat Barcelona in the final of the Cup Winners’ Cup – securing the club’s first European trophy since winning the European Cup in 1968.

Hughes’ goals also helped the club to the final of the League Cup and a sixth-placed finish in the top tier, the forward playing an influential role in the early successes of the Ferguson era.

After Hughes’ double win, Manchester United claimed the award for the third time in four seasons following Gary Pallister’s coronation as the PFA Player of the Year in 1992.

Pallister helped the club to a runners-up finish in the final season before the introduction of the Premier League, contributing towards the league’s best defensive record and forming a fine partnership in central defence alongside Steve Bruce.

United also lifted both the League Cup and European Super Cup throughout the campaign, Pallister named as the division’s best player and remains one of just six defenders to win the award in its history.

McGrath’s story is one of a flawed genius, a player who was somehow capable of performing at the very highest level despite crippling knee issues and well-documented personal problems.

The centre-back, however, remains a great of Irish football and the winner of the PFA Player of the Year award during the Premier League’s inaugural season in the early nineties.

Having been ushered out of the door at Manchester United, McGrath found a new home at Aston Villa and starred, being named as the club’s Player of the Season for four consecutive years and earning the nickname ‘God’ from an adoring Holte End.

Crowned as the PFA Player of the Year after helping Villa to a runners-up finish in 1993, McGrath became just the second Irish player to win the award – after Liam Brady in 1979.

Cantona’s arrival from rivals Leeds had helped inspire United to a first league title in 26 years during the first edition of the Premier League, and the French forward was just as influential as Sir Alex Ferguson’s side retained the title the following season.

Sir Alex Ferguson’s men completed a domestic double with Cantona at the heart of it, scoring 25 goals in all competitions including a brace in the club’s FA Cup final victory over Chelsea at Wembley.

Cantona became the first player from outside of Britain or Ireland to claim the PFA Player of the Year award, ‘King’ Eric remaining one of the Premier League’s most iconic imports of all-time.

Manchester United’s early dominance of the Premier League came under renewed threat from a Blackburn side backed by the millions of Jack Walker in the mid-nineties, with Alan Shearer’s goalscoring exploits propelling the Lancashire side.

Shearer scored a league record 34 goals as Blackburn claimed a first league title in 81 years in 1995, winning the Premier League’s Golden Boot for the first time in his career in the process.

The forward also became the first player in Premier League history to score 30+ goals in more than one season, an achievement no player has matched in over two decades since.

Ferdinand was regarded as one of English football’s deadliest marksmen during the early nineties following a prolific spell at Queens Park Rangers, with Newcastle spending £6m to bring the forward to the North East as a replacement for the departed Andy Cole.

The forward proved instant value for money following an impressive debut season at St James’ Park, scoring a career-best haul of 25 Premier League goals as Newcastle finished as runners-up to Manchester United, Kevin Keegan’s side memorably blowing a 12-point advantage at the top.

Despite his side’s faltering finish, however, Ferdinand was still recognised by his fellow professionals as the league’s finest talent, the powerful star being named as the PFA Players’ Player of the Year.

Shearer was crowned as the division’s finest player for the second time in three seasons, this time in the colours of boyhood club Newcastle after securing a world-record move to St James’ Park in 1996.

The forward scored 28 goals in all competitions during his debut season with the club, becoming the first player in Premier League history to win the Golden Boot in three successive seasons.

The season proved to be Shearer’s most prolific in a Newcastle shirt despite spending a decade with the club, though it was not enough to crown the Magpies champions as they once again finished as runners-up.

The Netherlands international had impressed during two seasons in English football after arriving from Inter Milan, but Bergkamp’s finest campaign at Arsenal arguably came during the club’s first double-winning season under the guidance of Arsene Wenger.

Bergkamp began the campaign brilliantly and scored a stunning hat-trick at Leicester, one of five goals he scored throughout the first month of the season – memorably becoming the only player in history to finish first, second and third in Match of the Day’s Goal of the Month competition.

He continued to be the centre-piece in a superb Arsenal side and finished as the club’s leading scorer with 22 goals in all competitions, helping the Gunners’ to a domestic double and becoming just the second overseas player to be named as the PFA Player of the Year at the end of the season.

Whilst the majority of players on this list played for sides winning league titles or competing near the top of the division, Ginola’s recognition as England’s finest is an anomaly given the mediocre side in which he starred.

The fleet-footed Frenchman claimed the honour as the Premier League’s best despite Tottenham finishing just 11th in the division, Ginola’s dazzling dribbling skills and ability to produce individual moments of brilliance recognised in the end of season voting.

Ginola helped the club to League Cup success and scored seven goals for the north London side, becoming the first Spurs player in over a decade to win the award and memorably beat Manchester United’s treble-winners to the accolade.