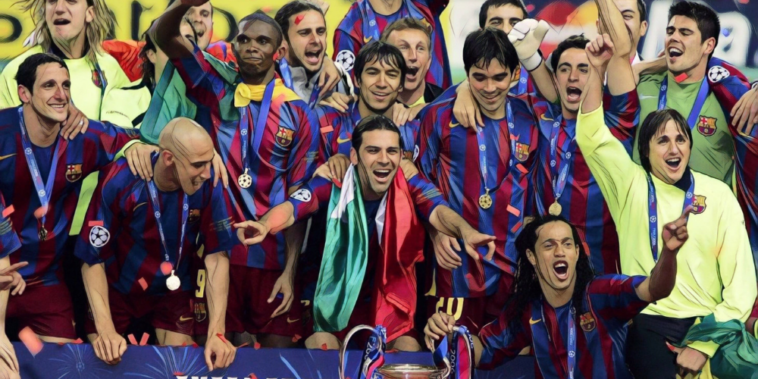 Arsenal’s dreams of becoming the first London side to win the Champions League were ended following defeat to Barcelona in the 2006 final, the Spanish giants coming from behind to secure victory in Paris.

The north London side faced an uphill task after goalkeeper Jens Lehmann became the first man to be sent off in a Champions League final after just 18 minutes, though the Gunners took a shock lead as Sol Campbell headed home before half-time.

We’ve decided to look back at Barcelona’s winning side, here is the team that broke Arsenal hearts in the 2006 Champions League final.

Victor Valdes became one of the great goalkeepers in Barcelona’s history and was a fixture in their iconic teams of the era, making 535 appearances across all competitions in the Catalan club’s colours.

He made a brilliant first-half save to deny Thierry Henry from close range, before making stops from Freddie Ljungberg and Henry in the second half to secure the first of three career winners’ medals in the Champions League.

The Spanish right-back struggled in the pressure of club football’s biggest game and lost Sol Campbell as the Arsenal centre-back powered home a header for the opening goal.

He spent five seasons with Barcelona and made a career-high of 44 appearances during the 2005/06 season, though his showing at the Stade de France was far from his finest and he was substituted with 19 minutes remaining.

One of Mexico’s finest footballing exports, the best years of Rafael Marquez’s career came at Barcelona with the centre-back crucial in the club’s run to Champions League success.

He became the first Mexican to represent Barcelona and to win the Champions League, with his excellent distribution from centre-back a key weapon for the Spanish side.

Marquez is one of just four players – alongside Lothar Matthäus, Gianluigi Buffon and fellow Mexican Antonio Carbajal – to feature in five World Cups and the only player to captain his nation at five separate tournaments.

Barcelona great and captain of the victorious side, Carles Puyol enjoyed an incredible one-club career at the Camp Nou that delivered 593 appearances, six league titles and three Champions League trophies.

Puyol was unfortunate to be penalised for the free-kick that led to Arsenal’s opening goal and was exposed by Henry’s pace on occasion, but otherwise proved commanding as the backbone of this Barcelona side.

Relentless in his will-to-win and aggressive in his defending, he has not truly been replaced at the Camp Nou since his retirement from the game in 2014.

The ex-Arsenal player got the better of his former side in the 2006 final, with Van Bronckhorst having spent three seasons with the north London side before moving to Barcelona.

Van Bronckhorst was switched from a midfielder to full-back upon his arrival in Spain and proved a major contributor to the club’s revival under compatriot Frank Rijkaard, winning back-to-back league titles and the Champions League at the Camp Nou.

The former Brazil international was selected as the anchor of Barcelona’s midfield three, having played an important role in the club’s European campaign.

Edmilson was at the centre of much of the Spanish’s sides play over the opening 45 minutes, though was substituted for Andres Iniesta at half-time after falling awkwardly following an aerial challenge.

Having starred during PSV Eindhoven’s run to the semi-finals the previous season, Van Bommel signed for Barcelona on a free transfer but endured an underwhelming first season in Spain.

The Netherlands international was a surprise inclusion in the side, starting ahead of Xavi who remained an unused substitute during Barcelona’s win over Arsenal in Paris.

Van Bommel failed to stamp his authority on the final and was cautioned following an incident involving Thierry Henry, before being substituted just after the hour in what proved to be his final appearance for the club.

Remarkably, he was the only player afield to have previously won the Champions League and proved crucial in the second half as Barcelona looked to utilise their man advantage and unlock an Arsenal defence sitting increasingly deeper.

Deco made 161 appearances in all competitions for Barcelona before a two-season spell at Chelsea, in which he added two FA Cups and the Premier League to an extensive silverware collection.

Beaten as a Monaco player by a Porto side containing teammate Deco in 2004, Giuly earned Champions League redemption in Paris and was one of Barcelona’s brightest players throughout.

The winger’s trickery and evasive movement caused the Gunners’ backline problems throughout, with Giuly a player who always worked selflessly for the greater good in his position on the flank.

The former France international spent three seasons with Barcelona and made 124 appearances, but the emergence of a certain Lionel Messi restricted his opportunities before a 2007 move to Roma.

The inspiration behind Barcelona’s rise from a transitional era to a period of huge success, Ronaldinho’s arrival was the catalyst behind the Catalan’s coronation as European champions.

The 2005/06 season proved his most prolific for the club with 26 goals in all competitions, as the back-to-back FIFA World Player of the Year dazzled with his mesmeric feet and awe-inspiring natural talent.

He scored in knockout stage wins over Chelsea and Benfica, his performances during Barcelona’s Champions League-winning campaign seeing Ronaldinho named as UEFA Club Footballer of the Year, adding another individual accolade to his burgeoning collection.

Has there ever been a player more enjoyable to watch than the carefree Brazilian?

Eto’o scored the crucial equaliser to get Barcelona level in the 2006 final, racing onto Henrik Larsson’s return pass before firing beyond Manuel Almunia.

The forward’s pace caused problems in behind all evening and he was taken out by Jens Lehmann for the goalkeeper’s early red card, after finding himself through following a defence-splitting pass from Ronaldinho.

The Cameroon international became one of the Spanish side’s greatest ever forwards during a five-season spell in Spain, netting 130 goals in just 199 appearances – including a second Champions League final goal against Manchester United in 2009.

Winner of three league titles and two Champions League trophies at the Camp Nou, his departure for Inter Milan following the club’s treble success in 2008/09 proved premature, with Eto’o playing an integral role in the Nerazurri’s own treble success the following season.

He remains one of just four players to have won the Champions League in successive seasons for different teams, following Marcel Desailly, Paulo Sousa and Gerard Pique.

Iniesta was beginning to grow in influence after coming through the academy system at Barcelona, making 49 appearances during his second season as a first-team regular in 2005/06.

He came on at half-time following an injury to Edmilson and helped Barcelona turn a one-goal deficit into victory, securing the first of his four Champions League winners’ medals.

Part of the club’s iconic sides and winner of two continental trebles, Iniesta is the most decorated Spanish footballer of all time after winning 35 career trophies, including scoring the winning goal as Spain beat the Netherlands in the 2010 World Cup final.

Henrik Larsson ended a glittering career with Celtic to sign for Barcelona on a free transfer in 2004, leaving the Scottish side after 242 goals in 313 appearances and four league titles.

The experienced Sweden international was a valuable squad member during two seasons in Spain, as Barcelona won consecutive league titles and the 2006 Champions League final.

It was Larsson’s introduction off the bench that helped turn the tide for the Catalan side, assisting both goals as Barca came from behind to win in what proved his final appearance before returning to his native Sweden to finish his career.

He finished the 2005/06 season with 15 goals in 42 appearances across all competitions.

Oleguer’s replacement, Juliano Belletti provided greater attacking thrust from right-back and wrote his name in Barcelona folklore after scoring a late winner to crown the Spaniards champions of Europe.

Belletti burst into the box before firing through the legs of Manuel Almunia, with the full-back visibly overcome with emotion as he was piled upon by his ecstatic Barcelona teammates.

The former Brazil international spent three seasons with the Spanish side and made 102 appearances, before winning a domestic double during a Premier League stint at Chelsea.