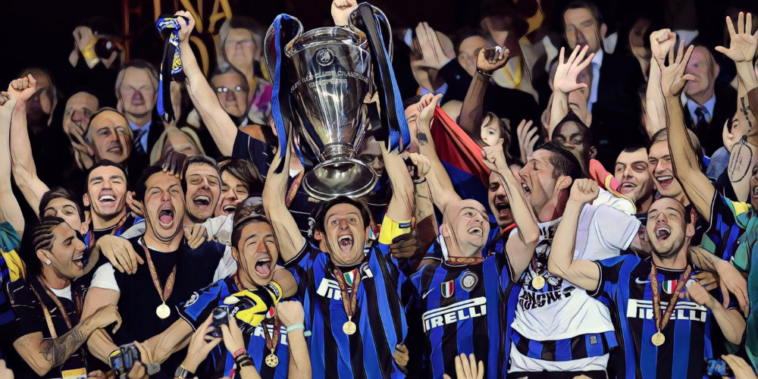 Inter swept all before them to win Serie A, the Coppa Italia, and the Champions League, that latter triumph seeing the club crowned champions of Europe for the first time in 45 years after beating Bayern Munich 2-0 at the Bernabeu.

It remains arguably the finest season produced by an Italian side, though the announcement that Goran Pandev was hanging up his boots following North Macedonia’s Euro 2020 exit means that the entirety of Inter’s Champions League-winning XI have now retired.

We’ve decided to look back at the Inter team that conquered all and beat Bayern in the 2010 UEFA Champions League final.

No player made more appearances than Cesar for Inter during their treble-winning season, with the Brazilian number one amongst the best in the world and key to the club’s success.

Cesar produced a fine performance in the final win over Bayern and made sharp saves to deny both Thomas Muller and Arjen Robben, with the Germans dominating possession and creating more opportunities (21 shots to 11) than eventual champions Inter.

Cesar won five league titles during a career with Inter that delivered 300 appearances in all competitions, later having spells at clubs such as Queens Park Rangers and Benfica before his retirement in 2018.

Maicon may forever be tainted by association with that performance from Gareth Bale at the San Siro, but what made Bale’s brilliance all the more remarkable was that his iconic showing came against arguably the world’s premier right-back at that time.

Maicon was a tour-de-force at the peak of his powers for Inter, the buccaneering Brazilian regularly rampaging forward from right-back to devastating effect.

The full-back scored in the semi-final win over Barcelona – one of an impressive seven goals he scored during the 2009/10 campaign – and played the entire 90 minutes of the final success against Bayern.

The third successive Brazilian to feature in Inter’s starting XI, Lucio was one of the best defenders of his generation and a player who enjoyed huge success at the top of the game.

Lucio rose to prominence as part of Bayer Leverkusen’s exciting side that came ever so close to historic success in the early noughties, before winning three domestic doubles during a five-year spell with Bayern Munich.

The World Cup-winning defender signed for Inter ahead of the 2009/10 season for a fee of just €5m and the signing of the experienced centre-back proved a masterstroke for Mourinho.

Lucio was a stand-out performer during the club’s treble-winning season – including in the final victory against his former side – and spent three successful seasons at the San Siro, racking up more than a century of appearances and winning six trophies.

Notorious Argentine hardman Walter Samuel formed the second half of an all-South American centre-back pairing, one which intimidated even some of Europe’s finest forwards.

Samuel was uncompromising and unrelenting in his approach to defending, a player who combined brutish strength with recovery pace, traits which allowed him to exhibit his aggressive style of defensive work.

Cristian Chivu rose to prominence as a teenage talent in the Romania side that upset England at Euro 2000, before forging a successful career in Italy that included spells at Roma and Inter.

The left-back’s place in the team had been under threat after fracturing his skull against Chievo in January, but returned just two-and-a-half months later – wearing protective headgear – and helped shackle Arjen Robben in the final win.

Arguably Inter Milan’s greatest ever servant, no player has adorned the club’s colours on more occasions than Zanetti, who achieved near impossible consistency over 858 appearances and two decades at the San Siro.

Zanetti’s attitude and application were never short of exemplary and he remains one of the most respected players of his generation, with Inter announcing the retirement of their number four shirt in his honour following the midfielder’s decision to hang up his boots in 2015.

Of his record-breaking number of appearances for the Nerazzurri, few can have been sweeter than beating Bayern to lift club football’s greatest honour in 2010.

In almost any top team there is a player who remains unassumingly brilliant, a star for who his work is appreciated ten-fold by his teammates despite the acclaim often going elsewhere.

Perhaps this was the role of Esteban Cambiasso in Inter’s iconic treble-winning outfit, the Argentine midfielder specialising in the disruption of opposition sides with well-time challenges, positional intelligence and insatiable industry.

Cambiasso signed for Inter on a free transfer from Real Madrid and his arrival must rank as one of the club’s best ever pieces of business, securing a decade of dedicated service with the midfielder the fulcrum of their best sides of the era.

Another of the summer signings that would transform Inter’s fortunes, Sneijder had spent three seasons with Real Madrid before enjoying the best period of his career in Italy.

The midfielder was central to Inter’s Champions League winning campaign, scoring in wins over CSKA Moscow and Barcelona in the quarter-finals and semi-finals respectively, before setting up Diego Milito for the game’s opening goal in the final.

No player provided more assists during the Champions League season than Sneijder, who was named as UEFA’s Club Midfielder of the Year for the 2009/10 season after helping Inter to the ultimate success.

The Netherlands international then scored five goals to help the Oranje to the World Cup final that summer, cementing his status as one of the best creative midfielders in the game.

Samuel Eto’o had twice won the Champions League during his time at Barcelona, scoring in final victories over Arsenal and Manchester United before being surprisingly allowed to leave for Inter in 2009.

The Cameroon international formed part of an exchange deal that saw Zlatan Ibrahimovic head in the opposite direction to Spain, though it was Inter who certainly got the better end of the deal as the forward starred during their treble-winning season.

Eto’o scored 16 goals in all competitions during the 2009/10 season and a huge 53 in just 102 appearances across two trophy-laden seasons with the Italians.

Pandev has become the final member of Champions League starting XI to announce his retirement, the forward having led North Macedonia into their first major tournament at Euro 2020, scoring his nation’s opening goal against Austria.

The 37-year-old’s exploits this summer came more than a decade after helping Inter to huge success, with the star winning a treble of honours in his maiden season at the San Siro.

Pandev has spent most of his club career in Italy and is the first Macedonian player to score 100 goals in one of Europe’s top five leagues, whilst he also retires as his nation’s record scorer with 38 goals.

The hero of the hour as Inter were crowned European champions for a third time, Diego Milito scored both goals in what proved to be the finest season of the Argentine’s career.

Milito signed for Inter ahead of the 2009/10 season following a prolific single season at Genoa, continuing his goalscoring excellence with a 30-goal campaign to fire the Nerazzurri to treble success.

Milito took both goals in the showpiece in clinical fashion, first lifting a delightful dinked finish over Bayern goalkeeper Hans-Jörg Butt, before twisting and turning beyond Daniel van Buyten to seal Champions LEague success for Inter.

Inter Milan added the Champions League to their Serie A and Coppa Italia titles to complete the treble 🏆🏆🏆 pic.twitter.com/gkwsHCz5zx

Injuries restricted his later years with the club, though that season has ensured Milito remains one of the most iconic Inter players of the modern era, his five-season spell ending with 75 goals in 171 appearances.