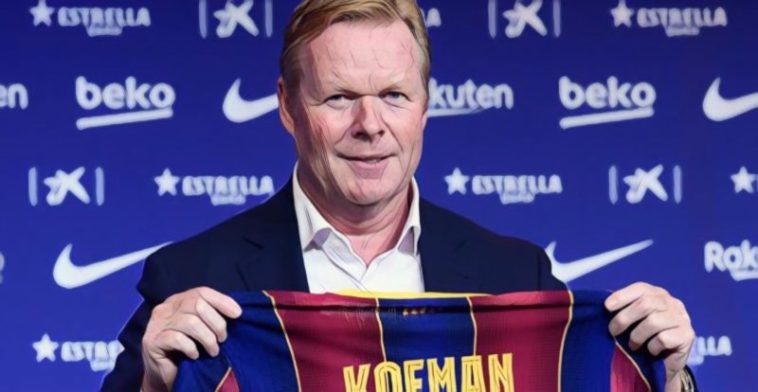 Barcelona look set for a new chapter following the appointment of former player Ronald Koeman as the club’s new manager, the Spanish giants looking to reestablish themselves amongst Europe’s elite following a turbulent and troublesome period.

Koeman’s arrival comes after the sacking of Quique Setien, who was dismissed after the club endured their first trophy-less season in more than a decade and suffered the humiliation of an 8-2 Champions League exit at the hands of Bayern Munich. The former Holland manager’s already difficult job of turning the tide in Catalonia made all the more difficult by the bombshell revelation that six-time Ballon d’Or winner Lionel Messi has handed in a transfer request.

Not since the appointment of Pep Guardiola – a man who became the most successful manager in the history of Barcelona after winning 14 titles in just four seasons – have the club’s fortunes ever plummeted so low, the ghost of Guardiola continuing to largely haunt Barcelona in the seasons since his departure.

We’ve decided to look back at the six men to have taken charge at the Camp Nou since Guardiola’s exit eight years ago, and rate their impact at one of football’s most illustrious clubs:

Barcelona have a tradition of promoting from within and following the unprecedented success of former player Guardiola, appointed the club’s long-time assistant Vilanova as the departed manager’s successor.

Vilanova had worked alongside Guardiola for the club’s reserve side and for each of his four successful seasons in charge at the Camp Nou, before stepping up for his first senior role ahead of the 2012/13 campaign.

His sole season saw Barcelona reclaim the Spanish title from arch-rivals Real Madrid after amassing 100 points throughout a stellar domestic campaign, finishing 15 points clear of the succeeded champions and setting a new record by scoring in each of their 38 league fixtures.

The Catalan club were beaten in the semi-finals of the Champions League and Copa del Rey by Bayern Munich and Real Madrid respectively, before Vilanova stepped down from his position to undergo treatment for throat cancer, an illness that would tragically see him die aged just 45-years-old in April 2014.

Deviating away from coaches with Barcelona links proved costly for Los Cules following the disastrous and brief spell of Gerardo ‘Tata’ Martino, the Spaniards having initially been left impressed by Martino’s work at Argentine side Newell’s Old Boys.

Martino’s reign began brightly with a 7-0 opening day thumping of Levante and a 14-game unbeaten run to start to season, but the Argentinean tactician failed to establish his tactical identity as the club’s fortunes began to stutter.

Barcelona lost the league title on the final day of the season to Atletico Madrid and exited the Champions League at the last eight to the same side, their only silverware success of the season coming in the form of the Spanish Super Cup.

Martino admitted to making ‘monumental mistakes’ during his single season reign at the Camp Nou as he struggled to manage a collection of stars, the coach departing after less than a year in charge following a hugely underwhelming tenure.

Martino’s misfortune saw Barcelona return to a former fans’ favourite once more with the appointment of Luis Enrique as head coach, a man who had spent several seasons of success at the Camp Nou as a player, winning back-to-back league titles in the late nineties before spending a spell as manager of Barcelona B.

Enrique’s arrival came after the coach had earned senior experience at both Roma and Celta Vigo, his appointment paying immediate dividends following a sensational debut season at the helm.

Spearheaded by a formidable frontline containing the talents of Lionel Messi, Luis Suarez and Neymar, Barcelona won a historic treble of Champions League, La Liga and Copa del Rey to re-establish themselves at the pinnacle of the sport.

The following season saw Enrique deliver a domestic double before further Copa del Rey glory in his final campaign as manager, the Spaniard winning nine trophies during his three seasons in charge, adding the Club World Cup and two Spanish Super Cups to a burgeoning collection of honours.

Like Guardiola before him, Enrique stepped down from the position citing his need to take a break from the pressure-cooker of the Camp Nou hot-seat, since returning to management with the Spanish national side.

The appointment of former player Ernesto Valverde came as somewhat of a surprise given the manager’s relative lack of experience at the very highest level, his coaching career having largely been spent bouncing round a succession of clubs including two spells at both Athletic Bilbao and Olympiakos and short stints at Villarreal and Valencia.

Neither overly qualified or popular, he did make an initial success of the role and won back-to-back league titles during his first two full seasons in charge, though those successes were blighted by a concerning record in continental competition as Barcelona sought a sixth Champions League crown.

Knockout stage capitulations to Roma and Liverpool – the latter an embarrassing 4-0 defeat after taking a three-goal advantage to Merseyside – ultimately placed Valverde in a precarious position, with the club’s laboured and ponderous performances in his latter months spelling the end.

Those failures in the Champions League, plus a succession of expensive mistakes in the transfer market, saw Barcelona part with Valverde despite sitting top of La Liga, Valverde sacked shortly after the turn of the New Year.

Quique Setién arrived at the Camp Nou amid the promise of a return to Barcelona’s traditional style, announcing his intention to return to the club’s fabled principles from the era of Johan Cruyff.

It was a welcome declaration following the more pragmatic approach of the aforementioned Valverde, but Setién failed to deliver on those promises during a brief and unsuccessful spell in charge, Barcelona taking backwards steps under the guidance of the former Real Betis coach.

Setién failed to refresh a clearly ageing side and his naivety in keeping faith with the club’s older players backfired in spectacular style, the Catalan side falling behind Real Madrid in the race for La Liga and enduring the most humbling of humiliations in the Champions League.

Barcelona’s 8-2 dismantling at the hands of Bayern Munich this month stands as one of the darkest days in the proud history of the club, an embarrassment of epic proportions as the German giants ruthlessly exposed both Barcelona and Setién’s shortcomings.

It proved the final straw as the coach was sacked just months after taking charge, his spell at Los Cules proving wholly unhappy.

Ronald Koeman arrives at Barcelona steeped in the traditions of the famous old club, the Dutchman having formed part of Johan Cruyff’s ‘Dream Team’ that delivered a long-awaited first European Cup to Catalonia in the early nineties.

Koeman’s appointment points largely to his previous links to the club rather than previous achievements in his coaching career to date, a lengthy spell as a manager having delivered a rather mixed bag in terms of silverware and success.

The former Netherlands international previously worked as an assistant to Louis van Gaal at Barcelona before senior roles at a succession of clubs, winning three Eredivisie titles during spells in charge of Dutch powerhouses Ajax and PSV Eindhoven.

He also guided Southampton to their highest-ever Premier League finish during a period in English football, but his managerial career has been blighted by underwhelming spells at the likes of Benfica, AZ Alkmaar, Valencia and Everton.

Now faced with the biggest job of his career – and perhaps the biggest in football at present – he has little room for error ahead of a defining season at the Camp Nou that could not have got off to a worse start due to Messi’s announcement that he wants to break his 20 year association with the club.