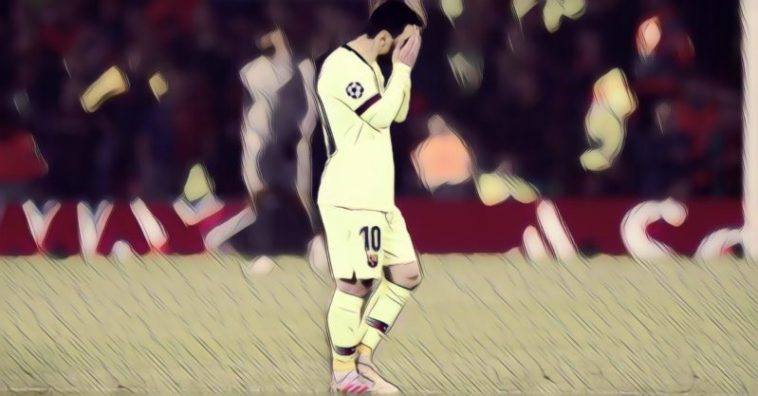 Barcelona’s wretched recent record in the Champions League continued with a humiliating exit at the hands of Bayern Munich on Friday night, one of Europe’s most illustrious clubs suffering a chastening evening against the Bundesliga champions.

The Catalan side’s inquest has already begun with manager Quique Setien set to be sacked and reports that Lionel Messi is ready to call time on his Camp Nou career, though their latest embarrassment is not the first time Barcelona have suffered shock losses in continental competition.

We’ve decided to look back at the results that have rocked Barcelona, here are six of the club’s most embarrassing Champions League defeats:

Barcelona’s most recent capitulation will have evoked painful memories of past defeats, though perhaps none more so than this embarrassment when in touching distance of the trophy.

What transpired was a shock result which proved the end Cruyff’s spell of success at the Camp Nou, Milan – experienced on this stage but not quite the force of old – running riot in Athens.

Daniele Massaro scored twice in the first half before Dejan Savicevic’s sensational lobbed finish made in three shortly after the break, Milan’s fifth European Cup sealed by the domineering Marcel Desailly who surged through to make it four.

Cruyff’s decision to leave out Michael Laudrup amid the three foreign player rule backfired and Barcelona failed to win another major trophy under his guidance, their thrashing by Milan remaining the biggest Champions League final defeat of all-time.

The late nineties saw the emergence of an Eastern European force under the guidance of Valeriy Lobanovsky, the manager taking charge of an exciting young Dynamo Kyiv side who made their mark on Europe’s biggest stage.

Few knew much about Dynamo’s abundance of young talent when they were drawn to face Louis van Gaal’s Barcelona in the group stages of the 1997/98 Champions League, but a 3-0 victory in the Ukrainian capital made the continent’s biggest clubs take notice.

Barcelona faced Lobanovsky’s side in the return fixture at the Camp Nou and were out for revenge after being embarrassed in their first meeting, only to suffer an even greater humiliation on home soil.

Andriy Shevchenko was the star of the show and hit a first-half hat-trick to put Dynamo in charge, with striker partner Serhiy Rebrov netting a fourth on a humbling evening for Barcelona in Catalonia. Dynamo progressed to the quarter-finals of the competition, whilst the Spanish giants finished bottom of the group to suffer an early and ignominious exit.

Bayern’s battering of Barcelona in this season’s competition was not the first time the German giants have inflicted misery on their Spanish counterparts, a semi-final meeting between the two sides resulting in a comprehensive victory for the Bavarians in 2013.

The clash pitted together two of Europe’s most formidable sides with one of Barcelona or Bayern having featured in each of the past four finals, but what was anticipated to be a close-fought contest proved to be a lop-sided clash in Munich.

Jupp Heyncke’s side ruthlessly exposed a Barcelona side considered as slight favourites pre-match, Thomas Muller scoring twice as the hosts dismantled the visitors to secure an emphatic first-leg victory.

Mario Gomez and Arjen Robben added further goals between Muller’s clinical brace, Bayern utterly dominant in a feverish atmosphere at the Allianz Arena, the home side producing a performance of intensity and power to all but end Barcelona’s hopes of a final appearance.

The job was completed with a similarly dominant display as Bayern won 3-0 in the return fixture to secure a 7-0 aggregate semi-final victory, the Germans beating compatriots Dortmund in the final to secure a historic treble.

Another knockout round first leg which left Barcelona’s dreams of European glory in tatters, the Spaniard’s stunned by a dominant performance from Paris Saint-German in the French capital.

Angel Di Maria scored twice for the Parisians who produced a statement performance in their bid to secure a maiden Champions League title, the Argentina international the architect of a famous victory at the Parc des Princes.

Di Maria opened the scoring with a curling free-kick before Julian Draxler doubled the advantage before the break, the former adding PSG’s third of the evening with another fine finish 10 minutes into the second half.

Edinson Cavani made it four on a night in which Barcelona’s famed front three of Lionel Messi, Luis Suarez and Neymar were largely anonymous, leaving the Catalans on the brink of elimination.

Barcelona did, however, improbably progress following one of the greatest comebacks in Champions League history, securing a dramatic 6-1 victory at the Camp Nou in an unforgettable second leg.

Barcelona fell victim to one of Anfield’s famous European nights in the semi-finals of last season’s competition, the Catalan club taken apart by Liverpool on a raucous evening on Merseyside.

Lionel Messi’s virtuoso display had handed the visitors a 3-0 advantage heading into the second leg of their last four meeting with Jurgen Klopp’s side, whose task was made even more difficult in the absence of first-choice forwards Roberto Firmino and Mohamed Salah.

It proved to be Firmino’s deputy who inspired an extraordinary comeback for the Premier League side, Divock Origi writing his name into the club’s folklore following a sensational recovery from the rampant Reds.

Origi opened the scoring after just seven minutes to reduce the deficit, but at half-time Barcelona were still comfortably ahead on aggregate. The introduction of Georginio Wijnaldum changed the course of the contest, however, the Dutchman scoring twice in the space of 122 seconds to incredibly level the tie.

Barcelona were rocked and the comeback was capped in stunning style, Trent Alexander-Arnold’s quickly taken corner catching a shellshocked Barcelona defence napping, allowing Origi to net his second and send Liverpool through to the final.

It was the second successive season Barcelona had surrendered a significant first leg lead to go out, and the club’s heaviest-ever defeat to an English side in European competition.

So here we have it, a loss that sent shockwaves through football and has led to Barcelona considering just where they head from here.

It was brutal, devastating and one of the biggest defeats in the club’s history, Barcelona’s shortcomings woefully exposed on an evening that will – for all of the wrong reasons – live long in the memory of one of world football’s biggest clubs.

Bayern are a sensational footballing side, but the ease in which the Germans decimated Barcelona was staggering in an utterly one-sided quarter-final clash between two heavyweights of European football.

Thomas Muller opened the scoring after just four minutes before Barcelona levelled through David Alaba’s own goal, but the parity between the sides lasted little longer as the floodgates opened in stunning style.

Ivan Perisic, Serge Gnabry and Muller all netted within the space of just nine minutes, handing Bayern an unassailable 4-1 advantage at the interval. Luis Suarez scored a second for Barcelona just before the hour, though it was a goal which proved little consolation as Bayern once again put their foot firmly on the accelerator.

Joshua Kimmich netted a fifth before Robert Lewandowski predictably got himself on the score sheet, the final insult to injury added by Philippe Coutinho, the on-loan and unwanted Barcelona player netting a late brace to help humiliate his parent club.

The lack of fight, desire and passion from a stunned and shamed Barcelona will have been hugely worrying to the club’s hierarchy, with wholesale changes anticipated following a loss that will likely leave long-lasting scars amongst the current set-up.

Read Also – Not a one-off: Lyon defeat was a microcosm of Man City’s disjointed season