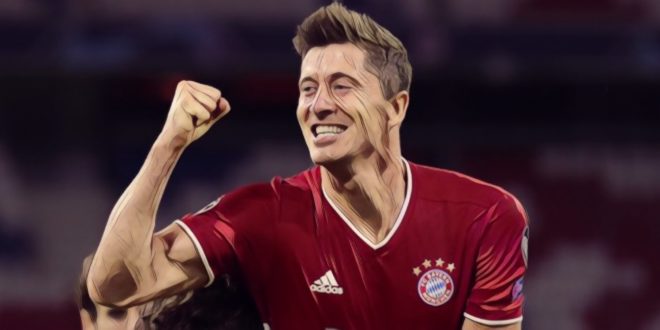 Picking our 19/20 Champions League Team of the Season

Bayern Munich were crowned as champions of Europe for a sixth time following another thrilling season of Champions League action, the German giants securing a historic treble with a 1-0 final victory over Paris Saint-Germain in Lisbon.

The success of the Bundesliga side marked the end of a fascinating and unprecedented Champions League campaign, the season’s disruption amid the coronavirus pandemic leading to a thrilling latter stages with a mini-tournament format in the Portuguese capital.

Bayern may have reigned supreme but the tournament produced shocks in both Lyon and RB Leipzig reaching the last four, whilst Europe’s elite also welcomed a host of breakthrough stars including the likes of Erling Haaland and Alphonso Davies.

Following the conclusion of a memorable campaign we’ve decided to compile a side including the best players from this season’s Champions League, here is our dream XI from the 2019/20 season:

Paris Saint-Germain’s Keylor Navas deserves plaudits for his performances during the Parisian’s passage to a first ever final, but our selection in goal is Champions League winning captain, Manuel Neuer.

The Germany international has been regarded as one of the world’s premier shot-stoppers for more than a decade and led the Bavarian’s to success in fine style, Bayern becoming the first side in history to win the Champions League having won every single fixture throughout the competition.

Manuel Neuer has now kept a clean sheet in both a World Cup Final AND a #UCLFinal.

Neuer played every minute of their triumphant campaign to secure the second Champions League of his career, saving arguably his best display for the final victory over PSG, producing a series of stops including a decisive save to deny Neymar with the showpiece goalless.

The 34-year-old is considered the greatest goalkeeper of his generation by many following the success of his career, a second European Cup added to a burgeoning silverware cabinet already including eight Bundesliga titles and the World Cup with Germany.

Joshua Kimmich may not command the headlines like some of his Bayern Munich teammates but there is no disputing the German’s status as one of world football’s finest, a multi-functional and world-class talent who starred through the Bavarian’s historic season.

The 25-year-old rarely drops below consistent excellence whether he’s deployed as Bayern’s midfield metronome or as a rampaging right-back, the star’s versatility and tactical intelligence marking him out as a manager’s dream.

Kimmich created more chances than any other player in the Champions League this season and provided yet another telling contribution in Bayern’s final victory over PSG, the full-back’s pinpoint cross headed home by Kingsley Coman for the only goal of the game.

The newly-crowned champions possess a host of stars amongst their ranks, but few are as invaluable to Hansi Flick as the ever-consistent Kimmich.

An underrated presence at the heart of the Paris Saint-German defence this season, Presenel Kimpembe has matured alongside the experienced Thiago Silva to enjoy an excellent Champions League campaign for the runners-up.

Kimpembe played in all but one of the Parisian’s fixtures as they reached a first ever final, producing a series of solid defensive displays and registering an impressive pass success rate of 91.2%.

Dayot Upamecano has been linked with almost every leading club in European football in recent seasons, speculation that is only likely to intensify following another outstanding season for RB Leipzig.

The French youngster was the stand-out player from Leipzig’s first venture into the knockout stages, the Bundesliga side upsetting the odds to reach the semi-finals before being eliminated by PSG in the last four.

Upamecano helped Julian Nagelsmann’s side top their group before keeping clean sheets in both legs of their last-16 victory over Tottenham, though it is his performance in Leipzig’s quarter-final victory over Atletico Madrid that will live longest in the memory.

The 21-year-old was the best player on the pitch as Leipzig progressed to the last four, registering 100% for tackle success and take-ons completed, the ball-playing defender showing he belongs amongst Europe’s elite.

The rise of Alphonso Davies has been one of the stories of the Champions League season, the teenager establishing himself as one of the most exciting young talents in football following a hugely successful first full season with Bayern.

Davies’ explosive forays forward from left-back have been a fixture of Bayern’s success in Europe this season, the 19-year-old registering three assists – including one sensational run to set up Joshua Kimmich against Barcelona – throughout the German’s triumphant campaign.

An incredible campaign has culminated in Davies becoming the first Canadian in history to win the Champions League, his rapid rise from refugee camp to one of the world’s finest full-backs as remarkable as it is inspiring.

Thiago Alcantara looks set to leave Bayern Munich this summer and his potential departure will be a huge blow to the newly-crowned champions of Europe, the midfielder having starred throughout Bayern’s victorious Champions League campaign.

The Spaniard has been central to Bayern’s best displays as their chief conductor in midfield, dictating the play with effortless ease and impressing during the German’s final victory over PSG on Sunday.

No Bayern player in the #UCLFinal played more passes (85), made more ball recoveries (7), made more tackles (3), made more interceptions (2) or created more chances (2) than Thiago.

His 16th trophy with the club. 🙌 pic.twitter.com/NGi2zckbuA

His performance against PSG saw Thiago make more passes, more ball recoveries, more tackles and create more chances than any other player on the pitch, a brilliant all-round performance from a player capable of influencing the biggest of occasions.

Strongly linked with a summer move to the Premier League and Liverpool, the Merseyside club will be signing one of world football’s very best midfield talents if a deal is concluded.

Sitting slightly deeper in our attack-minded side is Thomas Muller, a player christened the Raumdeuter and one who perhaps remains under-appreciated despite a career of incredible success for both club and country.

Muller has enjoyed a renaissance this season following a difficult period to play a crucial role in Bayern’s treble-winning season, breaking the Bundesliga assist record and thriving once more in continental competition as the link between the German’s midfield and Robert Lewandowski.

The 30-year-old scored four times and registered two assists as Bayern were crowned as European champions, scoring a memorable brace in the club’s stunning 8-2 thrashing of Barcelona in the quarter-finals.

Muller’s final performance perhaps symbolised the quiet effectiveness he so often has on the Bayern side, his hassling of Neymar contributing to the limited impact of the Paris Saint-Germain superstar in Lisbon.

He may never be the most aesthetically pleasing player in a side full of superstars, but Muller is arguably a perfect representation of German football with his insatiable work-rate, effectiveness and consistent ability to deliver.

The chief creator in a Paris Saint-Germain side containing talents such as Neymar and Kylian Mbappe, Angel Di Maria finished as the Champions League’s leading assist provider during the French side’s run to a maiden final.

Since Angel Di Maria's Champions League debut in 2007, only Messi and Ronaldo have provided more assists in the competition 👏👏 pic.twitter.com/SOawPZqtHp

The Argentine’s creativity was evident during a fine individual season that also saw him finish as Ligue 1’s leading assist provider, registering more than double the total of next highest goal creator in France’s top tier.

PSG’s hopes of a first Champions League title were ultimately ended following a frustrating final defeat, but Di Maria will likely remain of utmost importance to the Parisian’s hopes of going one better next season.

Serge Gnabry’s evolution from Premier League struggler to one of world football’s best wide players has been well-documented this season, the Germany international having thrived in a Bayern Munich side blessed with an abundance of both speed and skill.

Equally adept with either foot and on either flank, Gnabry has developed into an ever-improving finisher, scoring 23 goals in all competitions this season including nine in nine appearances in the Champions League.

The former Arsenal youngster’s four-goal destruction of Tottenham was the most devastating example of his clinical talents, whilst it was Gnabry who secured Bayern’s passage to the final with a brilliant brace against Lyon in the semi-final.

The image of Gnabry and Joshua Kimmich – who played together in Stuttgart’s academy as youngsters – celebrating Bayern’s success was one of the most poignant of the post-final celebrations, two players who have risen through the ranks of German football to stand amongst the game’s best.

The best player in the Champions League – and quite possibly the world – this season, Robert Lewandowski finished as the tournament’s leading scorer following a prolific campaign for the eventual winners.

Lewandowski finished the season with 55 goals in all competitions, including 15 in just 10 appearances amongst Europe’s elite, scoring in nine consecutive Champions League fixtures prior to the final against Paris Saint-Germain.

The Poland international’s tally included a four-goal haul against Red Star Belgrade in the group stages, whilst he was also sensational during Bayern’s last-16 victory over Chelsea – having a direct hand in all seven of the Bavarian’s goals over the two legs.

Lewandowski finishes the season as a treble-winner and the leading scorer in the Bundesliga, German Cup and Champions League, the 31-year-old so often the decisive player for the finest side in European football.

Sitting alongside the aforementioned Davies amongst the breakthrough stars of the campaign is Erling Haaland, the forward earning his inclusion in our Champions League Team of the Year despite exiting the competition in the last-16.

Haaland announced himself on Europe’s biggest stage with a hat-trick for Red Bull Salzburg on his first appearance in the competition, before scoring prolifically throughout the group stages to become the first teenager in history to score in their first five Champions League fixtures.

The Norwegian’s goalscoring exploits earned him a winter window move to Borussia Dortmund, where he marked his first European performance for the club with a brace to secure victory over Paris Saint-Germain at the Westfalenstadion.

Haaland was unable to prevent Dortmund losing the return fixture to the eventual runners-up as the Bundesliga side exited Europe, but he finished the season having scored 10 Champions League goals in just six starts – the second highest tally in the competition behind only Lewandowski.