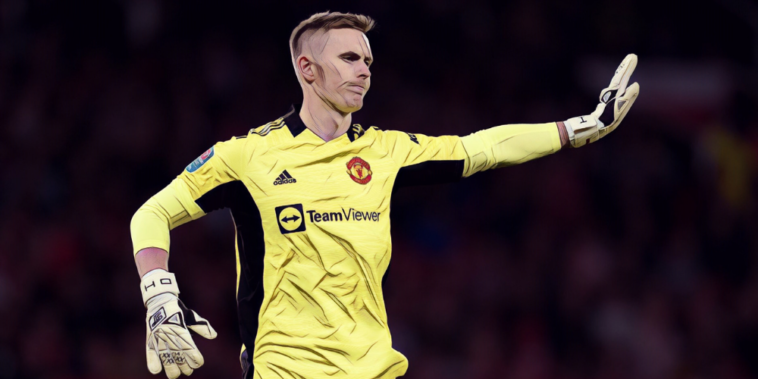 Dean Henderson is believed to be keen on leaving Manchester United during the January transfer window, having failed to dislodge David de Gea as the club’s number one goalkeeper.

Henderson made 26 appearances across all competitions as first-choice duties were shared last term, but has found himself behind the Spaniard this season and has made just two appearances in cup competition.

A host of clubs are believed to be monitoring the 24-year-old, who will be keen to secure regular first-team football and reclaim his place in the England squad.

So for those of you interested in the best places to gamble online like Casino Wings, we decided look at the five favourites to sign Dean Henderson from Manchester United.

West Ham have been priced at 12/1 odds to sign Henderson in January, despite the Hammers being relatively well-stocked with goalkeeping options.

Lukasz Fabianski remains the club’s first choice ‘keeper and is believed to have held talks over a new deal at the London Stadium, though the Poland international will turn 37 before the end of the current campaign.

David Moyes also signed Alphonse Areola – impressive on loan at Fulham last season – on loan from PSG during the summer window, but the 28-year-old has featured only in cup competition to date.

Henderson could prove a long-term replacement for Fabianski should West Ham firm up their interest, however, he will demand first-choice status if he is to leave Old Trafford after a frustrating period.

Tottenham have been previously linked with Henderson and have again been credited as admirers, with the north Londoners understood to be monitoring his situation.

Hugo Lloris has entered the final months of his contract and his future remains uncertain beyond the end of the season, the signing of Henderson perhaps viewed as a succession plan to the long-serving France international.

A winter window deal appears unlikely, however, with both Spurs and United contesting for a top-four finish and Champions League qualification.

Spurs signed Pierluigi Gollini on loan from Atalanta during the summer with a view to a permanent deal, but the Italian has not made a single Premier League appearance with his minutes restricted to the Europa Conference League and Carabao Cup.

Brentford have been priced alongside Spurs at 10/1 odds to sign Henderson, having seen number one David Raya ruled out for an extended period with a knee injury in October.

The Bees have kept just one clean sheet in the nine fixtures Raya has missed, and Thomas Frank could look towards the winter to reinforce his side as they bid to remain clear of relegation trouble.

Henderson’s arrival, potentially on loan, could prove the perfect short-term solution for both Brentford and the goalkeeper, adding a high-quality option to the Bees’ goalkeeping stocks and allowing the shot-stopper a run of regular games at Premier League level.

Ajax are reportedly interested in bringing Henderson to the Eredivise, having relied on veteran Remko Pasveer for much of the current campaign in the absence of the suspended Andre Onana.

Onana recently returned after a nine-month suspension, but has been included in the Cameroon squad for the Africa Cup of Nations early next year. His future also appears uncertain beyond this season with the 25-year-old strongly linked with signing for Inter Milan on a free transfer next summer.

Contingency plans are required at Ajax and Henderson could prove a viable option this winter, should the Red Devils be prepared to sanction a loan deal.

Should the Dutch side firm up their interest, Ajax chief executive Edwin van der Sar will be hoping his links to Old Trafford can help strike a deal.

Newcastle are the 5/2 favourites to sign Henderson next month, with the Magpies having been linked with a raft of players since their Saudi-led takeover.

January provides Newcastle with a first chance to invest and Eddie Howe’s squad is in need of an injection of quality, the club currently mired in the Premier League’s bottom three after winning just one of their opening 19 games.

No side has conceded more than Newcastle’s 42 goals and defensive reinforcements will be required if the ambitious new ownership are to avoid relegation early into the regime.

Attracting players could prove difficult given their perilous position, but the funds available and promise of an ambitious project could tempt names to the North East.