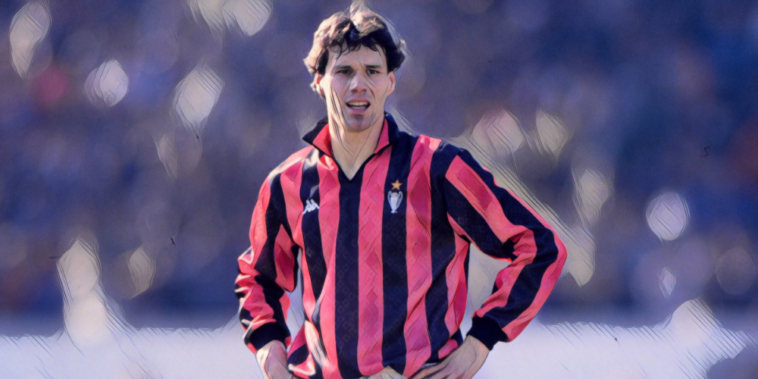 Utter the name of Marco van Basten to even casual football fans and one image will instantly be conjured, a moment of exquisite genius to score one of the sport’s most iconic goals.

As a hoisted, hopeful long pass from Arnold Mühren crossed diagonally over the pitch of Munich’s Olympiastadion, those inside the stadium were just milliseconds from witnessing a goal that has been replayed and retold a thousand times and more since its execution.

Van Basten’s volley, that volley, was the crowning moment of an extraordinary footballer, a thunderous hit from near the byline that coronated a fantastic Dutch side as champions of Europe for the first time.

It represents the height of Van Basten’s career and a goal for which he will forever be remembered in the collective mind of the football world, though his tale is one of much more, a master craftsman who led the finest sides of his era and whose career contained both triumph and tragedy.

Van Basten’s breakthrough came after arriving at the esteemed Ajax academy as a teenager, the talented youngster having attracted attention following his performances for local sides in his native Utrecht.

Tall and athletic, but with a sublime subtly to his game and a two-footedness that left defenders bamboozled, his raw attributes provided promise and the nurturing environment of Ajax allowed his potential to be fulfilled.

He scored just minutes into his senior debut during the 1981/82 season, coming on as a substitute for Johan Cruyff, the legendary footballing figure who would have huge influence on the emerging Van Basten.

His second season brought more opportunities and more goals, before his third campaign in the Ajax first-team saw Van Basten claim the Eredivisie’s leading scorer accolade, one he would not relinquish until his departure for Italy four seasons later.

Van Basten’s period with Ajax proved one of phenomenal productivity, averaging almost a goal-per-game in an era when such standards were unheard of, his league total for the Amsterdam outfit reaching 128 goals in just 133 appearances.

His poise and precision inside the penalty box were what made Van Basten special, but he was intelligent and instinctive, flourishing amid the footballing principles of Ajax and Total Football.

There was little that appeared off limits to a footballer for who goalscoring came astonishingly naturally, from towering headers to deft chips, rasping drives from distance or curled free-kicks, Van Basten’s collection of goals was as diverse as it was dense.

His involvement in that showpiece had come despite troubling ankle injuries in his final season at Ajax, but a record of 43 goals from 43 appearances somewhat masked the issues that later became prominent.

Van Basten moved on in search of a new challenge and signed for AC Milan in 1987, with the Rossoneri acquiring the forward in their bid to end an eight-season title drought.

Whilst the Scudetto arrived during that debut campaign, the summer signing’s contribution was limited as he scored just three league goals in a season disrupted with injury issues.

Such was his struggle for fitness, Van Basten was a fortunate inclusion as the Netherlands travelled to West Germany for the 1988 European Championship, though his previous exploits ensured his place in Rinus Michels’ squad.

It was a gamble that proved inspired.

Named as a substitute for the opening defeat to Soviet Union, he returned to the side in spectacular fashion after scoring a sensational hat-trick against England.

Both sides needed to win after losing their opening games, but it was Van Basten’s clinic in centre-forward play that saw the Netherlands’ triumph, scoring all three goals in a 3-1 victory, as Tony Adams and Mark Wright failed to live with his movement and predatory touch.

Michels’ side qualified for the semi-finals after beating Ireland. A last four meeting with arch-rivals and host nation West Germany awaited and, once again, it was Van Basten who proved the difference.

Lothar Matthaus and Ronald Koeman exchanged penalties to leave the scores level heading into the final minutes, before Van Basten’s late winner sealed the Dutch their place in the final and a rematch with the Soviet Union.

Successive World Cup final defeats in the 1970s had left a scar on the Netherlands national side, but their Euro ’88 vintage exorcised their demons, Ruud Gullit opening the scoring – from a Van Basten assist – before their formidable forward’s crowning moment.

Even when watched on countless replays it is difficult to fathom the combination of technique, timing and audacity from Van Basten, his venomous volley a breathtaking spectacle even decades later.

Having almost missed the finals, he was named as the European Championship’s best talent, having been the inspiration behind the Oranje’s first – and to date only – major tournament success.

Returning to Milan, he was soon joined at the San Siro by national colleague Frank Rijkaard and together, alongside Ruud Gullit, the trio formed a Total Football triumvirate that would lead the Rossoneri into a golden era.

The first of successive European Cup successes was won at the end of the 1988/89 season, with Van Basten netting twice – reaching 33 goals in all competitions – as Steaua Bucharest were beaten 4-0 in the final.

Having won the Ballon d’Or following his performances at Euro ’88, he retained the accolade the following season as Europe’s finest footballer, before adding a third in 1992 – with only Lionel Messi and Cristiano Ronaldo having ever won the award on more occasions.

Such was their success, Milan completed the entire 1991/92 league season without defeat, part of an Italian record of 58 games unbeaten as Fabio Capello’s side became known as “Gli invincibili”.

Franco Baresi and Paulo Maldini offering the solidity behind Van Basten and Gullit further forward, with the former twice winning the Capocannoniere as Serie A’s leading scorer during a period in which he scored 128 goals in the red and black of Milan.

Van Basten was a pure finisher of the highest calibre, instinctive when in sight of goal and his mix of ruthlessness and insatiable appetite for winning combined to create a goalscoring phenomenon.

He became the first player in history to score four goals in a Champions League match in 1992, a destruction of IFK Göteborg in which Van Basten scored one of his finest goals, an outrageous acrobatic effort to stun the Swedish side.

Tragically for both Van Basten and the sport, that season’s final – a 1-0 defeat to Marseille in Munich – proved the final time he took to the field, as an incredible career was cut short through injury at just 28.

He spent the entire next season sidelined as Milan claimed a league and Champions League double, his road to rehabilitation ultimately proving an impossible one and two years on from his substitution in the 1993 final, he announced his retirement from the game.

Van Basten’s career saw him score 282 goals in 372 appearances for Ajax and Milan, whilst he was the velvet genius behind Dutch football’s greatest triumph.

One of just five footballers to have won the Ballon d’Or on three or more occasions, his achievements rank him amongst the pantheon of all-time icons, whilst still leaving an ever-lasting sense of what could have been.

The ankle injuries that had plagued him became a fight Van Basten was unable to come back from, several surgeries failing to eradicate the crippling pain the forward faced.

His final match came coincidentally at the same Olympiastadion venue where his glorious goal had won Euro ’88 just five years earlier. A fitting location, if not the fitting farewell to a genuine legend of the game.