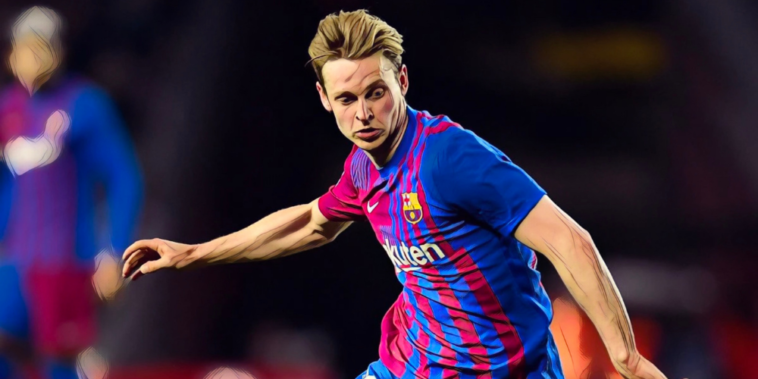 Frenkie de Jong has been linked with an exit from Barcelona this summer with a number of Europe’s leading clubs monitoring the midfielder.

De Jong has been a regular in the side since signing from Ajax in a €75m deal in 2019, though recent reports have suggested the Spanish side could consider lucrative offers as the club look to fund a rebuild under Xavi.

The Netherlands international has no shortage of admirers across Europe and ahead of the summer transfer window. So for those of you who like to follow the latest odds and are interested in the best free bets, we look at the bookmakers’ five favourites to sign Frenkie de Jong.

Liverpool have been priced at odds of 16/1 to sign De Jong ahead of the summer transfer window.

Jurgen Klopp’s options are strong in midfield at present, but with Jordan Henderson, Thiago and James Milner each into their thirties and Alex Oxlade-Chamberlain seemingly set for a summer exit, the Reds could enter the market for a midfielder approaching his best seasons.

De Jong would fit that bill and has shown he can perform in a number of midfield roles, whilst the Premier League’s current strength will appeal to leading names on the continent.

Klopp’s recent commitment to a new deal – one which will run until 2026 – is another attractive aspect of a move to Anfield.

Paris Saint-Germain had been interested in signing De Jong before his move to Barcelona, having rivalled the Spanish side for his signature in 2019.

Having missed out on that occasion, the Ligue 1 side could revive their interest as the club look to breathe new life into their project.

Idrissa Gueye, Ander Herrera and Georginio Wijnaldum are all the wrong side of 30, with the latter linked with a departure after struggling to command an automatic role since signing from Liverpool on a free transfer last summer.

De Jong’s arrival would be a signing for both the immediate and longer term at the Parc des Princes as PSG look to reset and rebuild ahead of another challenge for the Champions League.

Could Arsenal attract De Jong to the Premier League?

The Gunners have shown improvement under Mikel Arteta this season and boast a promising core of talent, with the likes of Emile Smith Rowe and Bukayo Saka players for both the present and future.

Arsenal are in need of central midfield additions and a partner for Thomas Partey in the engine room, with De Jong potentially following a long lineage of leading Dutch talents to move to North London.

De Jong previously spoke about imitating the career path of an ex-Gunners icon in Marc Overmars, hinting at his interest in a move to Arsenal in 2019.

Speaking to Voetbal International, he said: “I actually thought Arsenal was pretty beautiful in the past.

“In my mind, I have had the following list for a long time: Ajax-Arsenal-Barcelona, call it the Marc Overmars route. But yes, if you can go directly to Barcelona, then you are also right where you want to be. Faster than you ever dared to dream.”

Juventus are 12/1 second favourites to sign De Jong, in a deal that would unite the midfielder with former Ajax teammate Matthijs de Ligt.

De Ligt and De Jong were the leading names from the exciting Ajax team that reached the Champions League semi-finals in 2018/19, before each moved on to European giants that summer.

The former has become a key figure in the Juventus team despite the club losing their status as Italian football’s dominant force, but a rebuild is underway with the January signings of Dusan Vlahovic and Denis Zakaria pointing towards the future.

Juventus’ midfield options have underwhelmed this season and De Jong would strengthen the spine of a side that has real quality and future growth at either end of the pitch.

Erik ten Hag’s impending arrival at Manchester United has increased speculation over a move for De Jong, with the midfielder having flourished under his compatriot’s guidance at Ajax.

United’s need for midfield additions and De Jong’s potential availability have made the Red Devils 4/1 favourites for his signature, offering a natural fit given the familiarity between the 24-year-old and Ten Hag.

De Jong has struggled to produce his best performances on a consistent basis in Catalonia and a reunion with Ten Hag – and former Ajax midfield colleague Donny van de Beek – could appeal.

Barcelona have already reached an agreement to sign Valencia’s Carlos Soler in a £16m deal this summer, whilst AC Milan’s Franck Kessie is also set to arrive at the Camp Nou on a free transfer.

Those deals could facilitate De Jong’s exit from the club with the funds reinvested in strengthening alternative areas of the squad.