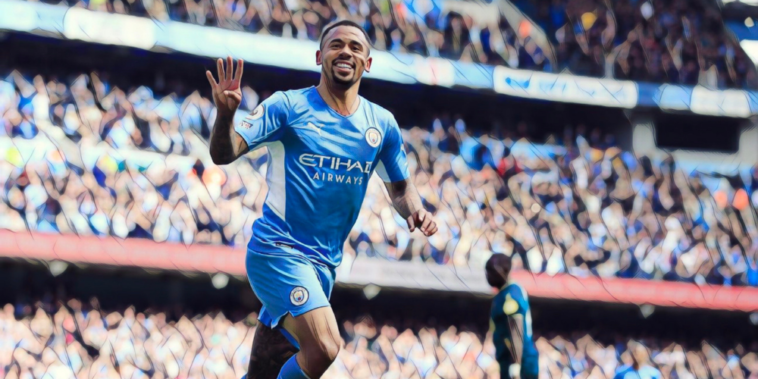 Gabriel Jesus has been linked with an exit from Manchester City this summer, with the forward having struggled to command an automatic place in Pep Guardiola’s plans.

Jesus hinted at a potential departure in comments earlier this month, with City closing in on the signing of Erling Haaland and already set to welcome Julian Alvarez to the Etihad this summer.

The Brazilian will have a long list of clubs interested in his signature after compiling an impressive record of 87 G/A in 96 league starts since arriving into English football.

So for those of you who like a bet and are interested in the top rated betting sites, we’ve decided to look at the bookmakers’ five favourites to sign Gabriel Jesus.

Borussia Dortmund are set to target forward additions this summer with Erling Haaland expected to leave the Bundesliga side at the end of the campaign.

Manchester City are odds-on favourites to sign the Norwegian and the bookmakers have priced a potential exchange deal that sends Jesus in the opposite direction at 12/1.

Dortmund have been linked with various Premier League forwards including both Chelsea’s Timo Werner and Manchester United’s Anthony Martial, though the club’s lead target is believed to be Red Bull Salzburg starlet Karim Adeyemi.

Jesus offers an intriguing alternative to Adeyemi and a proven track-record in one of Europe’s major leagues, having scored 58 goals in just 96 Premier League starts.

AC Milan are three wins away from a first Serie A title in more than a decade, despite the lack of a prolific goalscorer in the Rossoneri’s ranks.

Rafael Leao and veteran duo Olivier Giroud and Zlatan Ibrahimovic have shared the goalscoring responsibility for the league leaders, who could look to the long-term with a forward addition this summer.

Jesus has previously discussed his admiration for Milan, revealing he turned down interest from Inter Milan and Juventus before moving to Manchester City, due to his allegiances to the Italian side.

“It was not an easy decision to take, but I want to improve and that’s what made the difference in the end,” Gabriel Jesus told Gazzetta dello Sport’s Extra Time magazine, as per Football Italia, on joining Manchester City in 2016.

“I said no to Inter and Juventus” not least because “I’m a Milan fan!”

Juventus, coincidentally, can also be found at odds of 12/1.

Kylian Mbappe’s future remains up in the air, though the lack of a new deal at PSG indicates all roads lead to Real Madrid this summer.

Mbappe’s exit would be a major blow to PSG and a high-profile replacement would be required, with Jesus a potential option should he make clear his desire to leave the Etihad.

PSG’s strong South American contingent could aid an easier adaptation for the 25-year-old, whilst Jesus’ selfless style and industry would be a welcome addition to a forward line that has lacked balance this season.

Joining PSG’s project could appeal to Jesus, with few teams in European football as well-placed to challenge for major honours at present.

Barcelona are joint-second favourites to sign Jesus, with the forward having labelled a move to Catalonia as a ‘dream’ during his time at Palmeiras.

Xavi will continue his rebuild at the Camp Nou this summer and the club continue to be linked with attacking options, with both Robert Lewandowski and Mohamed Salah among those who have been named as potential targets.

Jesus appears more attainable and a longer-term signing than that duo, however, and could add to an emerging core of promising talent at the La Liga side.

Comfortable across the forward line and set to enter the final 12 months of his deal at the Etihad this summer, he could prove a shrewd signing for the Spaniards given their present financial issues.

Arsenal are the favourites to sign Jesus from Manchester City and have been strongly linked with a summer move for the Brazilian.

Mikel Arteta is believed to want to sign at least two new forwards this summer with both Alexandre Lacazette and Eddie Nketiah out of contract at the end of the campaign.

Jesus would represent an upgrade on that duo and his proven Premier League record will appeal to the Gunners, who could secure a deal to sign a third Brazilian international, and Gabriel, to join Gabriel Martinelli and Gabriel Magalhaes at the Emirates.

Recent reports have suggested a fee in the region of £35m-£40m will be enough to prise Jesus from the Premier League champions.