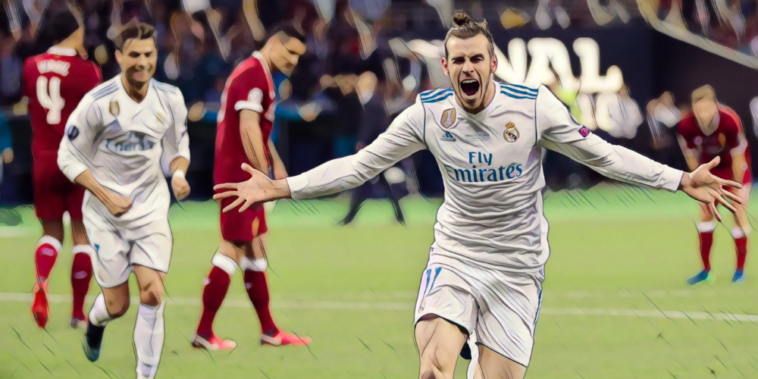 Real Madrid take on Liverpool in the UEFA Champions League final on May 28 in Paris, looking to be crowned European champions for a record-extending 14th time.

The Spanish giants have a long and illustrious history in this competition, having dominated the early seasons of the European Cup to establish themselves as a major force in continental competition.

Some of world football’s greatest ever players have influenced the European history of Real Madrid, making telling contributions on the biggest of occasions.

Ahead of their latest final, we look back and rank the five best European Cup/Champions League final goals in the club’s history.

Real Madrid were an unstoppable force during the early editions of the European Cup, winning the first five trophies in succession during a stranglehold on the tournament in the 1950s and 1960s.

The fifth of those wins remains one of the most iconic finals of all time, as the legendary talents of Alfredo Di Stefano and Ferenc Puskas ran riot against Eintracht Frankfurt in Glasgow.

Stefano hit a hat-trick with Puskas scoring four of his own in a 7-3 thrashing of the German side at Hampden Park, with the duo remaining two of just three players to have scored trebles in a European Cup final – alongside Pierino Prati for AC Milan in their 4–1 victory over Ajax in 1969.

Puskas’ fourth of the evening was the pick of the goals, as the Hungarian turned sharply inside the area before lashing a thunderous left-footed effort into the top corner.

Despite signing for Real Madrid at the age of 31 in 1958, Puskas scored 242 goals in 262 appearances for Los Blancos and won four Pichichi Trophies, five league titles and three European Cups among his honours.

He scored a second European Cup final hat-trick against Benfica in 1962, though Real lost 5-3 to Benfica in Amsterdam.

Steve McManaman became a cult hero and one of British football’s best exports at Real Madrid, having signed for the Spaniards on a free transfer from Liverpool in 1999.

His debut season saw McManaman become the first English player to win the Champions League with a non-English club, as Real beat Valencia 3-0 in the first ever final between teams from the same nation.

The winger scored the second goal of the evening in spectacular fashion at the Stade de France, firing home a superb scissor-kick from the edge of the area.

There have been several goals with a more pleasing aesthetic than Sergio Ramos’ leveller in the 2014 final, but few wrapped in such importance and timing.

Real Madrid faced Atletico Madrid in Lisbon in the first-ever Champions League final between two teams from the same city.

Atletico looked set to end Real’s hopes of winning the fabled La Decima and a tenth European title, leading through Diego Godin’s goal until the final seconds of stoppage time.

Ramos scored the most dramatic of goals after meeting Luka Modric’s corner to power home, a goal which changed the course of history as Real ran over their shell-shocked city rivals in extra-time to secure a 4-1 win.

"After that moment I told my mother that from there I could die peacefully. It's the best—the goal of my career for what it represents not only for me, but for football and for our club"

Ramos scored again as Real beat Atletico on penalties in the 2016 final, making him one of just seven players to have scored in multiple finals during the Champions League era – a remarkable statistic for a centre-back.

Gareth Bale might not be the most popular man in Madrid these days, but the Welsh winger certainly wrote himself a chapter in the club’s Champions League history in 2018.

Bale had scored in the final win over Atletico Madrid in 2014, becoming the first Welshman to score a goal in a European Cup/Champions League final in the process.

Four years later he found himself on the bench as Real took on Liverpool in Kyiv, before being called upon with the scores level in Ukraine.

Bale entered the pitch just after the hour and within two minutes had scored one of the greatest goals in Champions League history – final or otherwise.

Marcelo’s floated cross was met with an audacious overhead kick from Bale, whose effort flew past the stunned Loris Karius to give Real Madrid the lead.

Bale soon scored a second from distance as his swerving effort evaded Karius, completing one of the great Champions League final cameos.

Zidane had arrived at Real Madrid in a world-record move from Juventus the previous summer and had endured a testing opening six months in Spain, before finding his form during the club’s run through the Champions League knockout rounds.

The reigning World Player of the Year saved his best moment for the final itself, scoring a special winning goal as Bayer Leverkusen were defeated at Glasgow’s Hampden Park.

Zidane watched Roberto Carlos’ hopeful cross fall out of the Scottish sky, before executing a sensational volley – on his weaker left side – that flew into the top corner.

🗣️ Roberto Carlos: "The ball came bouncing and I crossed the ball. I didn't even know Zizou was there."

Zidane’s goal was a moment of genius from one of the great footballers of his generation, a perfect goal at a perfect moment for Real’s record signing.