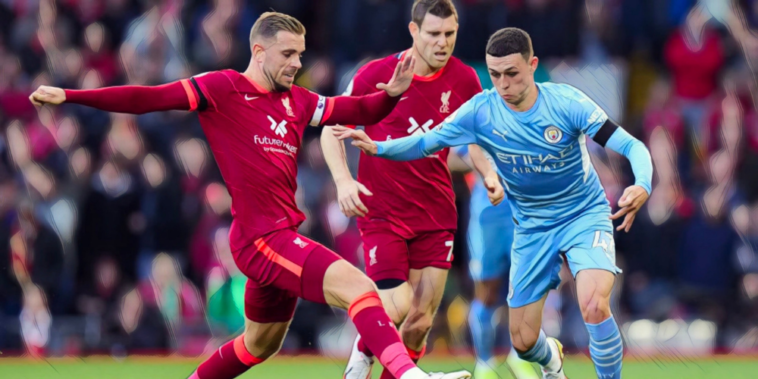 Following the conclusion of the 2021/22 campaign we look back at five of the games that made the latest Premier League season one to remember.

Here are five of the best Premier League games of the 2021/22 season.

Brentford’s first season in the Premier League was a spectacular success as the Bees avoided a relegation dogfight to thrive in their first top-flight campaign since 1947.

Thomas Frank’s side took points from the likes of Chelsea, Arsenal, Tottenham and Liverpool, the latter a thrilling draw at the Brentford Community Stadium on September 25.

Brentford showed little fear and were willing to go toe-to-toe with their title-chasing opponents, with Ethan Pinnock poking home an opener to raise hopes of an upset.

Liverpool hit back in a clash that felt more like an old-fashioned cup tie, equalising through Diogo Jota’s header just moments later before Mohamed Salah put the Reds ahead early in the second half with his 100th league goal for the club.

Brentford struck the bar before Vitaly Janelt bundled the rebound over the line to bring the sides level again. Curtis Jones’ deflected strike looked to have won it for Liverpool, only for the Bees to strike with one last sting as Yoanne Wissa’s goal rescued a point and struck a damaging blow to the visitor’s title aspirations.

If ever there was an advert for the Premier League this was it, as the division’s two best teams went at it in a pulsating clash on Merseyside.

City dominated a first half that ended goalless with Phil Foden causing countless problems for stand-in right-back James Milner, before the second period exploded into life.

Liverpool raced out after half-time and took the lead through Sadio Mane, after the Senegal forward fired across Ederson after a surging run from Mohamed Salah.

Foden equalised with a crisp strike after finding more space inside the left channel, before Salah struck one of the goals of the season with a stunning solo effort that saw the Egyptian dance through a succession of blue shirts before finding a finish.

Kevin De Bruyne’s deflected equaliser levelled the scores and ensured City left with a deserved point as the full-time whistle blew on a breathless game packed full of individual quality.

An utterly bonkers game of football that had looked like being a humiliating hammering for Leicester who found themselves four goals down inside the opening 25 minutes at the Etihad.

Brendan Rodgers’ injury-hit side were blown away in the opening exchanges, as goals from Kevin De Bruyne, Riyad Mahrez, Ilkay Gundogan and Raheem Sterling gave the champions a commanding lead.

A spirited Foxes fightback changed the complexion of the clash however, as Leicester struck three times in ten second-half minutes to raise hopes of an extraordinary comeback.

City were shaken but settled and Aymeric Laporte’s header gave the home side a much-needed two-goal cushion.

Raheem Sterling’s late penalty completed the scoring in a Boxing Day goal-fest in Manchester, remarkably the second 6-3 win of the season for Pep Guardiola’s side after a thrilling Champions League game with RB Leipzig in September.

Everton secured their Premier League status with a captivating comeback win against Crystal Palace, coming from two goals down to win in dramatic fashion at Goodison Park.

The Toffees 68-year stay in the top flight had appeared in real danger after a disastrous campaign, though Everton headed into their penultimate game of the season knowing a win would seal survival.

Frank Lampard’s side got off to a nightmare start however, as goals from Jean-Philippe Mateta and Jordan Ayew put Palace 2-0 ahead at the half-time whistle.

Michael Keane lashed in a goal nine minutes into the second half to spark a comeback and roared on by a feverish home crowd Everton continued to push forward.

For the ninth time the Premier League title race went down to the final day, with Manchester City knowing a win would be enough to defend their crown.

Few envisaged an upset at the Etihad, but Aston Villa played their part in a dramatic final day that proved a rollercoaster of emotions for those in City colours.

Goals either side of the half-time break from Matty Cash and Philippe Coutinho put Villa 2-0 ahead, the visitors well worth their lead after a poor performance from a stuttering City.

Steven Gerrard looked set to help old side Liverpool with a defining result in Manchester, only for Pep Guardiola’s team to turn the game on its head.

Ilkay Gundogan – on as a substitute – headed home in the 76th minute to raise hope, before Rodri’s low effort levelled the scores just minutes later.

Gundogan slammed in a second from close range to complete the comeback, as City scored three times in just five minutes to clinch the title.