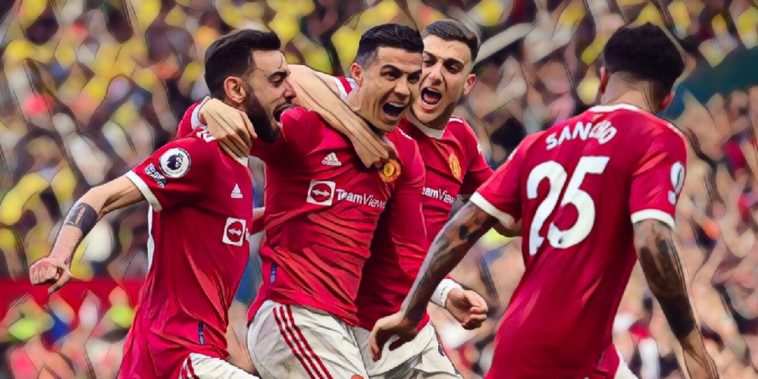 Despite coming into the game against the backdrop of fan protests against the Glazer family’s controversial ownership, United got off to a perfect start after seven minutes when Cristiano blasted home an Anthony Elanga square ball after the young Swedish winger had pounced on some poor Norwich defending.

Just after the half-hour mark the Portuguese superstar made it 2-0 to the home side, the 37-year-old scoring a brilliant near post header from an Alex Telles corner.

United seemed to be coasting at that stage but just before the break, the Red Devils mediocre defence would once again cost them. Teemu Pukki found himself in acres of space down the left and Kieran Dowell met the Finnish striker’s cross and headed home at the back stick.

Not long into the second period and Pukki would equalise for the Premier League’s bottom side, the 32-year-old finishing calmly past de Gea after once again finding himself with the freedom of Old Trafford.

Then in the 72nd minute Ronaldo showed there is still plenty of fight left in the old dog when he sealed his hat-trick and the three points for his side. The veteran attacker firing a superb free-kick in off the post from just over 25 yards out.

United’s bid to finish in the top four – which looked dead a buried – was given a major boost today with them securing a crucial win and rivals Arsenal and Spurs both slipping to 1-0 defeats. The Red Devils are now three points behind fourth-place Spurs with six games to play, although speaking interim coach Ralf Rangnick he was far from happy with his sides overall display.

“After we scored our second goal we should have made life easier for ourselves but we didn’t,” he told BBC’s MOTD.

“We lost our structure and weren’t aggressive enough.

“It’s about being clever and smart. All of a sudden it was 2-2 and David de Gea kept us in the game. But we definitely have to raise our play.”

Cristiano Ronaldo has scored 21 goals in all competitions with Man United this season. 🇵🇹 #MUFC pic.twitter.com/IkHEjXIY6S

The German coach was also quick to stress that his side need to be better defensively and can’t keep relying on match-winner Ronaldo.

“We should not only rely on him,” Rangnick continued. ”We played well at times but we sometimes slowed the game down and didn’t make use of overlap situations on the wing. Defensively I was not happy at all.”

Man United now face a massive week, with the Old Trafford outfit facing away trips to arch-rivals Liverpool and Arsenal.