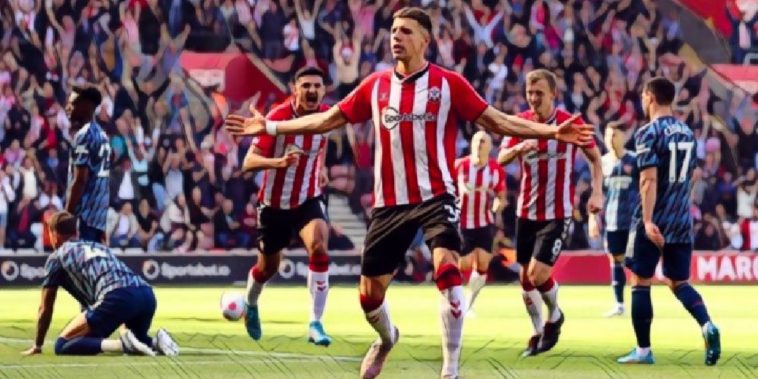 Arsenal’s dreadful recent run of form continued today, with the Gunners slipping to a costly 1-0 loss away to Southampton.

Despite coming into the game on the back of consecutive defeats to Crystal Palace and Brighton, Arsenal started brightly and Saints ‘keeper Fraser Forster pulled off two excellent stops to deny Gabriel Martinelli and Bukayo Saka.

However, on the stroke of half-time Jan Bednarek would pour misery on the Gunners when the Polish centre-back fired a finish into the roof of the net after Arsenal failed to properly clear their lines from a corner.

Arsenal dominated possession and territory during the second period, but they just couldn’t find a way past an inspired Forster in the Saints net. The defeat means the North London outfit have now dropped to sixth in the table, three points behind local rivals Spurs, although Mikel Arteta’s side have a game in hand.

Speaking afterwards, Arsenal coach Arteta admitted it had been a hugely frustrating day for his young side.

“It’s a really difficult one to take,” Arteta told BBC Sport. ”The way we controlled the game makes it difficult to understand how we lost the game.

“We didn’t hit the target many times and the end product was not as good as it can be. We conceded a very sloppy goal from a set-piece. When you have the amount of situations we created, you need to score three or four.

“The way we defended for the goal wasn’t good enough. You saw how the team tried. More than ever now, I want to be close to them.

“Forster was incredible, the saves that he made today. It was a defining moment. That’s why I say the box has decided the game today. You could see the game was one-way traffic.”

The Spanish coach then went on to admit that his side’s collapse of form is a ‘real worry’ at a crucial time of the season.

“It’s a real worry,” he said. “We’ve lost games in different ways. To lose the way we did today is difficult to explain. If you saw the game, you’d say Arsenal had won comfortably.

“We performed but didn’t get a result. We need both. You have to put the ball in the net. You have to make the decisive moments count to win football matches and at the moment we’re not doing that.”