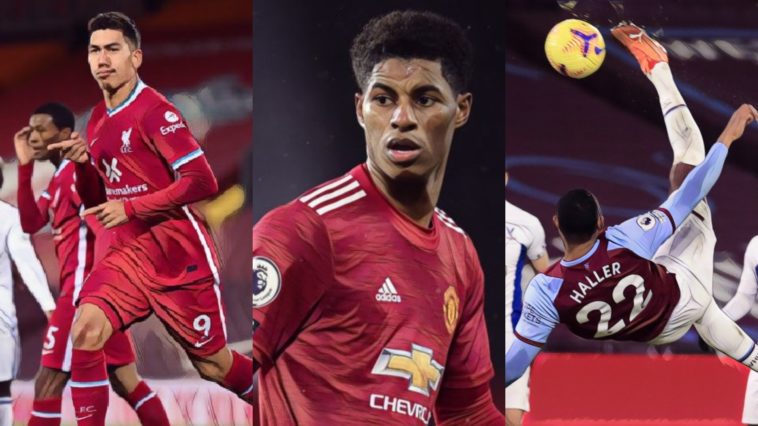 Every gameweek we reward the best – and worst – of the Premier League action with our weekly awards.

Marcus Rashford has done some incredible work this past year and he was deservedly rewarded for his efforts with the Expert Panel Award during the BBC Sports Personality of the Year ceremony.

For everyone who, over the last 12 months, has stepped in to support our most vulnerable children, thank you. This one is for you ♥️ #spoty pic.twitter.com/HRizTxBBWv

Perceptions of Roberto Firmino‘s form tend to rest on whether he’s scoring goals or not, even though his importance to Liverpool lies in his off-the-ball movement and the way he ties the attack together, something he has continued to do while struggling to get on the scoresheet.

This past week Firmino delivered the full package, scoring an injury-time winner against Tottenham Hotspur in midweek before dominating Crystal Palace at the weekend. The Brazilian forward scored twice and assisted another during an absolute rout at Selhurst Park, gifting himself the perfect Christmas present.

🎶 There's something that the Kop wants you to know…🎶

And just like that, Seb Haller paid off every last cent of that massive transfer fee West Ham paid for him with this beaut of an overhead kick.

A thing of beauty 😍 pic.twitter.com/DvCgsG0J6D

The assist for Roberto Firmino’s first goal against Palace was vintage Andy Robertson. His delivery is sublime week in, week out.

Sam Johnstone was a rock against Manchester City in midweek, but his 91st minute save from an Ilkay Gundogan header was absolutely vital.

It’s not often that Harry Kane fluffs his lines with the goal in sight, but against Liverpool he missed a glorious opportunity to snatch victory when his headed effort from a few yards out bounced off the ground and over the bar.

One of the more comical Premier League moments of 2020, Matt Ritchie‘s own goal against Fulham will be popping up on blooper reels for a long time.

Come the end of the season it might be the decision that saves West Bromwich Albion from suffering relegation down to the Championship, but the manner in which the club handled the sacking of Slaven Bilic was really poor.

The Midlands outfit evidently decided before the Manchester City game that the Croatian would be replaced by Sam Allardyce, perhaps they even anticipated that the Baggies would get smashed as expected at Eastlands, making the timing of the firing all the easier.

Bilic’s men proceeded to put in their best defensive performance of the season, winning a valuable point against one of the most expensively assembled squads in world football. It was a result and performance that would have given them hope of staying up.

But the players were barely out of the showers when reports of his impending sacking were doing the rounds. The club had clearly briefed reporters on the decision while Bilic was in the middle of his post-match press conference.

Bilic then had to sit on the team bus all the way back home while his players were reading stories about him being on the chopping block. It showed an extraordinary lack of respect towards their manager, who was given the goal of winning promotion within two years and did it in one.

Despite this, Bilic subsequently wasn’t backed in the transfer market and asked to keep a Championship-level squad in the Premier League. One win in 13 games suggested they would fall short of that goal, reflecting the lack of quality in the team.

Harsh sackings aren’t always incorrect ones, and this might well turn out to be the right one at the right time. But the West Brom hierarchy have not covered themselves in glory with this one.

See Also: Five Premier League players who have outgrown their club and deserve an upgrade