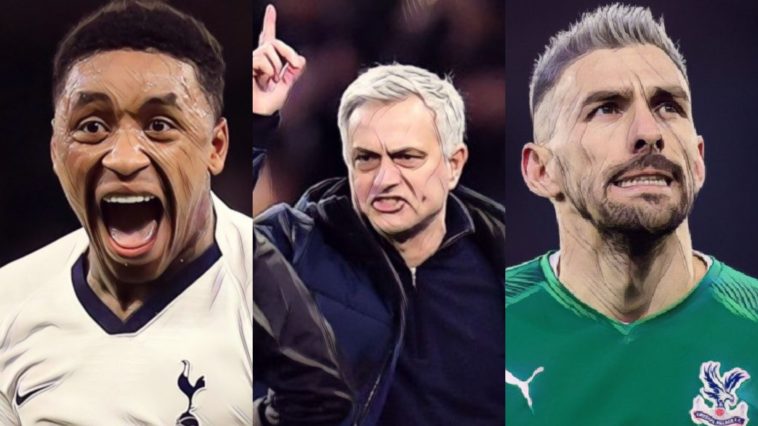 Jose Mourinho was in great form on Sunday, getting one over on his long-time rival Pep Guardiola as Tottenham Hotspur beat Manchester City 2-0, grinning like a cheeky chap, and whipping out the tried and trusted histrionics on a big night for the Portuguese.

The highlight was Mourinho’s instant change of mood when his assistant informed him Raheem Sterling was on a yellow card and was in danger of being sent off after a bad challenge. One second he’s jovially laughing away, the next he’s sprinting like Batman on the way to the Joker’s lair to complain vociferously to the fourth official just a few short yards away.

So much to love about the entire scene, particularly the deliberate manner in which he closes his bottle and the way the official slowly backs away almost immediately like a sober man trying to avoid a pub fight, which will surely feature heavily in this season’s episode of Premier League Years.

The most famous matches between Guardiola and Mourinho

How many number nines are the creative centerpiece of a team’s attack? They are almost exclusively the ones tasked with scoring the goals, and maybe chipping in with setting up a few every now and then, but Roberto Firmino was in his customary selfless mood, using his considerate talents to provide a hat-trick of assists in Liverpool’s 4-0 win over Southampton.

Mo Salah was similarly on fire, scoring half of the Reds’ haul on Saturday, but it’s the Brazilian’s fascinating manipulation of space that so often makes their offence tick, as it did so effectively on this occasion.

Robbo to Firmino to Ox in TrueView is 🔥 pic.twitter.com/qeqser4eXz

A dream debut for Spurs’ latest signing Steven Bergwijn, who showed off disgusting control and a whopper finish to score his first goal for the club.

😅 "My debut was hard at first getting used to the intensity but the second half was much better.”

🤩 “You have not seen everything, I can do more. You will see."#THFC #COYSpic.twitter.com/THn7unoLf5

It takes a lot of nerve to attempt a chest pass in the opposition penalty area, but Ayoze Perez has more than enough apparently, having used his solar plexus to set up Jamie Vardy for a shot on goal against Chelsea. It didn’t result in a goal, but we admire the Spaniard’s moxy.

West Ham drew against Brighton after putting themselves in a very promising position, but it could have turned out worse for the London outfit had Solly March’s excellent free-kick found the back of the net late on in the game. Lukasz Fabianski made a terrific fingertip save to push it over the bar though, ensuring they earned a point at least.

Burnley have been on a good run of form lately, and should have added a third consecutive league win to their recent victories over Leicester City and Manchester United. In a tight encounter with very few clear cut chances, Jay Rodriguez had a glorious opportunity to steal all three points, but smacked his shot from six yards out against the crossbar.

Premier League team of the week for Gameweek 25

Pretty sure a goalkeeper’s job is to not carry the ball into the net. I guess they never taught Vicente Guaita that.

By now we all know that Pep Guardiola is sore loser. And that’s fine; he’s a fiercely competitive animal and at times it can be part of his charm. When he lost his everloving mind on the sideline against Liverpool earlier in the season, we laughed and meme’d and laughed some more about it.

But the Catalan’s post-match comments after his side’s shock 2-0 defeat to Spurs just came across as classless. Guardiola alluded to comments made by Richard Scudamore, former Premier League executive chairman, in 2018.

Read: Five things we learned from the Premier League weekend