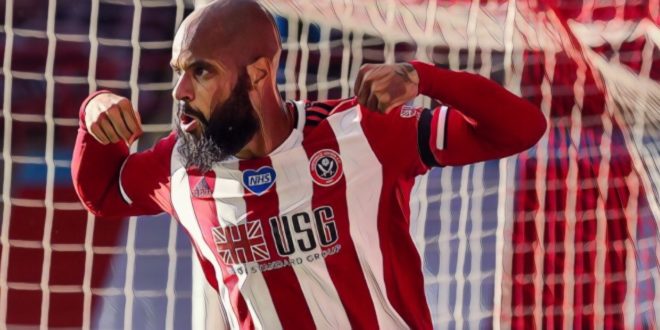 Every Monday we reward the best and worst of the Premier League action from the past week, featuring Michail Antonio’s destruction of Norwich, David McGoldrick ending his goal drought, and Caglar Soyuncu losing his mind.

David McGoldrick goals are like buses, you wait ages for one, etc. and so on. The Irish international’s brace against Chelsea was as unexpected as it was welcomed, his first goals of the season helping Sheffield United to a brilliant 3-0 win over the Blues.

Before this weekend McGoldrick had had 15 big chances in the Premier League, but had yet to score somehow. Not only had no other footballer had that many big chances and not scored, the lowest tally from a player in that bracket was the six scored by Wolves striker Diogo Jota.

It was a brilliant moment for the forward who has worked tirelessly for the Blades this season and, after going from August to July without a goal, this is his long overdue reward.

Meanwhile down in Bournemouth, Dominic Solanke scored his first two goals for the Cherries after an even longer drought, going 38 league games without a goal, and played a crucial part in their 4-1 win over Leicester City. It was perfect timing for the relegation-threatened side and a real feelgood moment for the 22-year-old.

Were West Ham United that good or Norwich City that bad? Either way, Michail Antonio was unstoppable, putting four goals past Tim Krul on Saturday afternoon and doubling his tally for the season in the process.

The Englishman’s nine shots were the most of any player this past weekend, as were his six shots on target and his expected goals (2.54xG).

Ron Atkinson: I used to joke with Jack Charlton that I had more Irish players than him

Gareth Bale, eat your heart out. Danny Welbeck helped Watford in their quest for Premier League survival by scoring the winner against Norwich City with a stunning overhead kick.

Everton have looked uninspired in recent matches, but this Lucas Digne assist was the most delicious pass of the entire month, if not year.

🔥 | The finish from @richarlison97 was emphatic, but let's talk about that assist from @LucasDigne… 💫 #EVESOU pic.twitter.com/cMBgqv0eTp

Phil Foden missed a string of chances against Newcastle United, but the worst of the lot came just after the interval when Kevin De Bruyne put the ball on a plate for the English midfielder to score, but instead he somehow poked it wide. Foden has been in terrific form lately, and played quite well against the Magpies, but this was a moment he’d probably rather forget.

Honourable Mention: Adama Traore hitting the bar from seven yards out for Wolves against Everton.

Arsenal have really turned the ship around lately, and looked on course to keep that good form going when they started strongly against Spurs, opening the scoring after 16 minutes through a brilliant Alexandre Lacazette goal. But no less than three minutes later all of their good work was undone when Sead Kolasinac hit a wayward pass to David Luiz, who couldn’t stop Heung-min Son from scoring an equaliser.

Heung-Min Son capitalises on some poor Arsenal defending to level for Spurs!

Spurs ended up winning 2-1 after Toby Alderweireld scored in the second-half, completing a miserable turnaround for the Gunners.

VAR really made a donkey of itself when it made three incorrect decisions in one day last week, but no one made a bigger fool of themselves than Caglar Soyuncu. The Leicester centre-back made a bad situation worse when, after conceding a goal on Sunday evening, he lashed out at Callum Wilson, earning himself a red card.

As you can imagine, things did not get better for the Foxes who went on to concede another two goals and watch their Champions League hopes begin to crumble with just three games of the campaign left.

A special mention to Jorginho, whose mistakes contributed to Chelsea’s 3-0 defeat to Sheffield United on Saturday and then became a meme on the Blades’ Arabic Twitter account.

See Also: Five of the worst football TV adverts ever