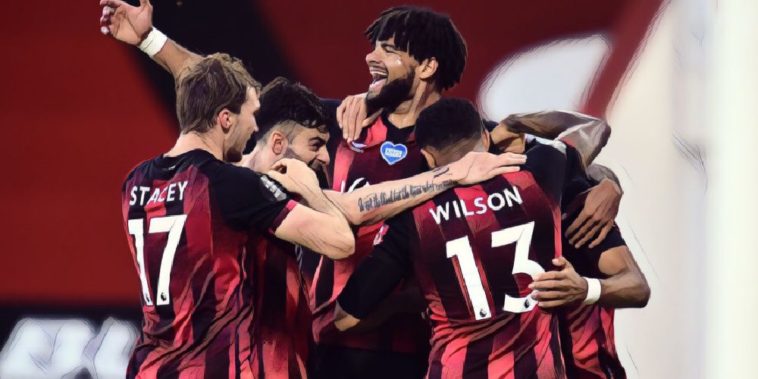 Bournemouth handed themselves a huge relegation lifeline, coming back from behind to beat 10 man Leicester City 4-1 at the Vitality stadium.

Leicester got off to a fine start as Jamie Vardy continued his pursuit of the Premier League’s Golden Boot, scrambling the ball home from close range following a defensive error from Lloyd Kelly, the veteran forward netting his fifth goal in three games and his 23rd of the season.

The Foxes continued to dominate and looked to be heading back up to third, but then, in the 66th minute, the game took an almighty twist. Kasper Schmeichel’s attempted goal kick hit the back of Wilfried Ndidi on the edge of the box, and as the midfielder attempted to retrieve the ball from Callum Wilson, he brought the England international down, with Junior Stanislas despatching the resulting penalty.

A minute later and incredibly the Cherries were ahead, Dominic Solanke scampering down the left flank before seeing his effort squirm under Schmeichel – his first goal in 39 appearances for the south coast club – while Caglar Soyuncu was sent off for a frustrated kick out at Wilson in the aftermath.

Leicester – who have only won twice in the league since January – continued to crumble following the red card, Stanislas’ strike in the 83rd minute taking a wicked deflection off Jonny Evans and past a helpless Schmeichel, before Solanke netted his second of the evening, taking advantage of a dreadful Christian Fuchs backpass before slotting home.

3 – Leicester are the first side to have a player sent off, concede a penalty and score an own goal in a single Premier League game since Wolves against Man City in January 2019. Crumbled. #BOULEI pic.twitter.com/RzKbFTKOqw

“I didn’t see that coming but we are not good enough to get too comfortable,” he told BBC Radio 5Live. “We were in control of the game, Bournemouth changed their shape and you expect a 10-minute spell when you are up against it. But we let them into the game with a penalty and I was very disappointed with how we played from there. It’s not like us, we are a team that is strong mentally and we don’t concede many goals.

“It’s a red card. We should defend the goal better but [Soyuncu] he’s lashed out. You offer the referee the opportunity to send you off. It’s massive to lose him for the next three games.

“I’ve always said it’s a dream for us to finish in the top four but we have to worry about playing well. At the moment, since we came back we have been playing for 45 minutes in games and that’s not enough. We will finish where we deserve to.

“If you think about what is at stake you have lost your focus.”

Meanwhile, Eddie Howe put his side’s incredible turnaround down to their ‘mentality’.

“We needed to change things at half-time and had the mentality that we had to go for it,” he told Sky Sports. “Thankfully we were able to swing things round, we had tactical issues in the first half but the main change was mental.

“It was almost the situation was as bleak as it could be, we had to find something, no fear. We did that right from the off and it vastly improved our performance.

“We always believed Dom (Solanke) is an outstanding player – there is a lot of expectation on his shoulders, technically he is very good and very intelligent, I do think there is a lot of goals in him and he proved that today.”

The result moves Bournemouth back to within three points of safety ahead of their final three games, while Leicester’s place in the top four now seems under threat, Manchester United just a point behind with a game in hand against Southampton on Monday.

See also – Tweets of the Week: Jack Charlton, Son vs Lloris, and Pickford’s wonder ‘save’