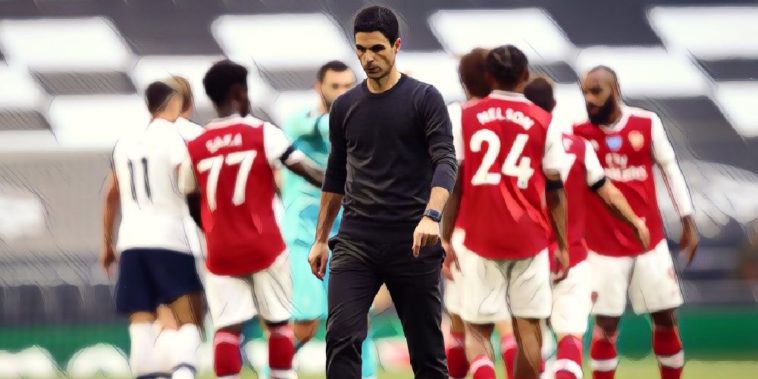 Arsenal’s hopes of securing European football were dealt a major blow, slipping to a 2-1 loss at the hands of bitter North London rivals, Spurs.

Arsenal went in front in the 16th minute, Alexandre Lacazette picking the ball up following a loose touch from Serge Aurier, before the Gunners number nine unleashed a venomous strike from 20 yards beyond his countryman Hugo Lloris in the Spurs goal – the Frenchman scoring his second goal since football’s restart.

The lead didn’t last long though, and three minutes after the opener, the scores were levelled. Sead Kolasinac’s sloppy backward pass toward’s David Luiz was picked up by Heung Min Son, the South Korean advancing into the area before chipping the ball over Emiliano Martinez.

After a relatively even first half, Arsenal dominated the ball after the break, though in a game which felt like the mid-table, end of season encounter that it was at times, it was Spurs who snatched the winner with nine minutes to play, Toby Alderweireld glancing home a Heung Min Son corner to seal all three points.

Speaking after the game, Mikel Arteta conceded that issues in defence once again were his side’s undoing – an all too familiar tale for the Gunners faithful.

“We gave them the game again, an individual error and the set-piece that cost us three points again,” Arteta told the media at his post-match press conference. “But I’m extremely proud of the way the team played.

“This is who we are, it doesn’t matter in which ground we will come here and do what we’ve done today, nullify the opponent and force them to kick the ball long and give it back to us. We have to improve in these areas because to compete at that level, you know the game is always open and when you [don’t] close it, you always have the uncertainty of what’s going to happen.

“It’s part of the process that we have and we will learn.

“The goals we conceded [was most concerning]. Scoring goals is the hardest thing to do in football and it’s the moment or a centimetre of hitting the bar or them making a good save. But the ones we had at the back today, we can do better.”

Asked about his side’s defensive struggles from setpieces, Arteta admitted it was one of his main concerns.

“It’s one of them but in this league, it’s very difficult,” he said. “It is part of the process we are trying to do. We will improve there and we know how important they are in big matches. We talked about it before the game today that set-pieces in this game are crucial, and today it cost us the three points.”

The result sees Arsenal leapfrogged by Spurs who now have a two point advantage in the race for Europa League football with just three games to play.

See also – Tweets of the Week: Jack Charlton, Son vs Lloris, and Pickford’s wonder ‘save’