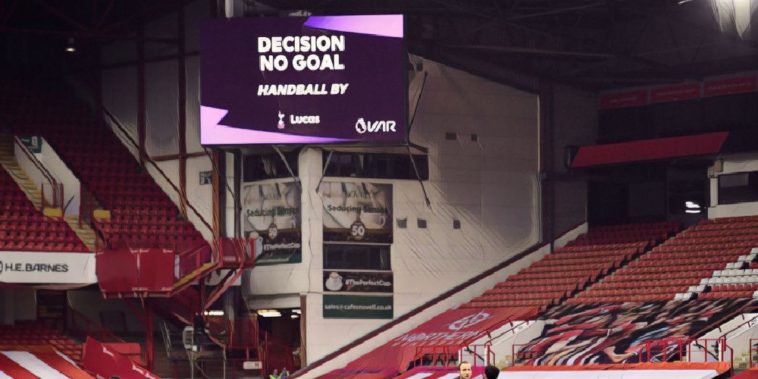 A whole host of Premier League managers have aired their frustrations with VAR following a glut of incorrect decisions in Thursday night’s fixtures.

Tottenham were denied what looked like a fairly obvious penalty, Bournemouth forward Josh King barging over Harry Kane in the box in just the fourth minute of the 0-0 draw at the Vitality, with VAR not overturning Paul Tierney’s on-field decision.

Unsurprisingly, Jose Mourinho was not happy at full-time at the potentially match-changing decision and speaking at today’s press conference, the Portuguese feels that referees should be available to publicly explain their decisions post-match.

“I think so. It would make things much more open and much more clear,” the Spurs boss said.

“Yes I made a mistake. Yes, I feel sorry for that. Yes, I had an incredible performance. Yes, I was perfect. They are very, very important in the game. As important as players.

“You should have access to them and ask them directly why. They are very important in the game. The game is players, managers, and referees.”

Meanwhile, Manchester United were awarded their 13th penalty of the season when Jon Moss adjudged Ezri Konsa to have brought down Bruno Fernandes on the edge of the box. Replays showed the decision to be incredibly questionable, though once again, VAR did nothing, much to the frustration of Villa boss Dean Smith.

Should Manchester United have been awarded the penalty though?

“It all changed around on the penalty decision,” Smith told Sky Sports after the game. “I can understand Jon getting it wrong, he’s on the pitch, but that goes to VAR and I don’t know what they’re looking at.

“It’s a disgraceful decision but I can’t really tell you what I think about it because I’ll get fined. It’s a poor, poor decision.

“They’ve got a screen over there they can go and look at but they don’t seem to be bothered.”

If that wasn’t enough, there was also another debatable decision in the Everton v Southampton game, with the visitors being handed a penalty – though perhaps justice was done as James Ward-Prowse crashed his effort off the bar, and according to the BBC’s Dan Walker, the Premier League have admitted that all three decisions were incorrect.

In case you missed it, we spoke to the PL match centre tonight and they confirmed👇🏻

Fernandes penalty: WRONG decision, should have been overturned

Ward-Prowse penalty: WRONG decision, should have been overturned

Kane non penalty: WRONG decision, should have been given

Speaking at today’s array of press conferences, a whole host of managers were asked about VAR, with Liverpool boss Jurgen Klopp perplexed as to why three people cannot come to the correct conclusion

“I can 100% that Dean Smith is struggling to accept what happened last night,” Klopp said at his pre-match press conference. “It should just be the right decision.

“What I don’t understand is overruling is so complicated that it must be a ‘clear and obvious’ mistake. It’s difficult but I didn’t think last night was too difficult. It’s obviously not good.

“I really would like to think that three people watch it – a ref, the VAR and another VAR and they should find the right decision in the end.”

Meanwhile, Leicester boss Brendan Rodgers also disagreed with the decision to award Man Utd a penalty, and while he insisted ‘there’s a future in VAR’, he added that how it is utilised ‘needs to be looked at’.

“Everyone can see it wasn’t a penalty,” said Rodgers. “These moments are game-changing moments. Whenever you are fighting at the top end or bottom end, these are crucial decisions. It will disappoint the managers concerned.

“There’s a future in VAR, it’s how it’s operated. It needs to be looked at, especially when decisions are going to the studio and there’s no pressure, with no crowd. And when some of the decisions have been as obvious as they have been, it gives you less confidence.”

FIFA head of referees Pierluigi Collina told Reuters on Thursday that ‘VAR should be used in the same way all over the world’, with the Premier League having been criticised for taking a different direction to the rest of Europe. In virtually every other competition, the on-field referee is permitted to review the footage on the pitchside monitor and make his decision, rather than allowing a second referee hundreds of miles away essentially re-referee the key decisions as is the case in England.

Arsenal boss Mikel Arteta said that while he accepts that the official’s job is a ‘complicated’ one, he believes there should be an end-of-season ‘debate’ about how to best apply the technology.

“Well as I said before, some of them [the decisions] are very complicated,” Arteta said.

🤔 Should Tottenham Hotspur have been awarded a penalty for the push on Spurs striker Harry Kane?

“We don’t know how they are judging the situation but I’m sure they have the right intentions.

“At the end of the season, I think that is something that has to go into debate. We need to agree on some principles that we’re going to apply, so at least every decision has the same raised level of determination, basically.”

Man City‘s Pep Guardiola backed the system to be better next season, though questioned whether the Premier League would ‘admit the reality’.

“I think next season will be better but you have to ask the people who are in charge. I’m not a specialist,” Guardiola said. “You have to ask the guys their opinions on the first season of VAR, ‘How was the experience?’

“I don’t know if they will admit the reality but you have to ask them.”