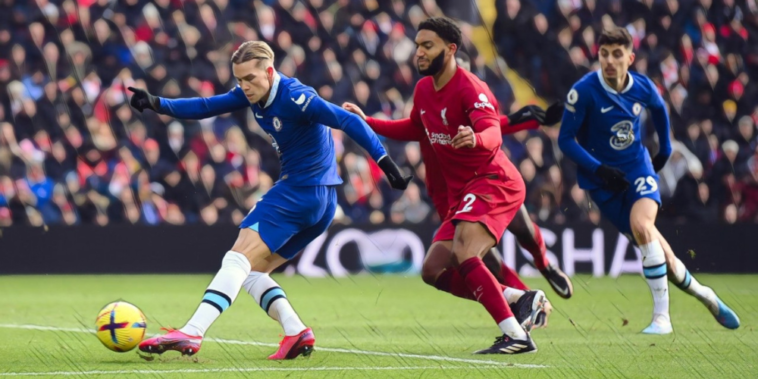 Chelsea were given their first glimpse of new arrival Mykhaylo Mudryk this weekend as the £88m recruit made his debut as a substitute against Liverpool.

Those in attendance will have been impressed with the Ukrainian’s impact after Mudryk injected life into a drab contest at Anfield. There were flashes of the attributes which made Mudryk such a sought-after talent, including one show of scintillating speed which saw the winger eat up the ground on Ibrahima Konate, the Liverpool defender himself no slouch.

James Milner was forced into a crude challenge to avoid a footrace with the former Shakhtar speedster, with the veteran soon substituted as Jurgen Klopp looked to combat the direct threat Mudryk brought.

There were some loose touches and hesitation that can perhaps be attributed to a first competitive appearance since November, but the positives were clear and included one moment of fleet footwork inside the area.

“That was really good,” Graham Potter said on Mudryk’s debut.

“He’s only been with us a couple of days. He will only get better the more he is with us, and the more we understand each other, but promising signs. He will get supporters off their seats. His dribbling action is really high. He knows where the goal is.”

After a season to forget so far, Mudryk has the potential to add some excitement into the Chelsea forward line.

Unai Emery’s previous reign in the Premier League ended in disappointment, with few sad to say farewell to the Spaniard as his Arsenal tenure came to an end.

After a rebuild of his reputation at Villarreal, Emery has returned to England with renewed intent and has proven a breath of fresh air at Aston Villa.

Only Arsenal have taken more points than Villa (16) since Emery’s arrival at the club and after inheriting a team hovering above the relegation places, now has the club’s fanbase dreaming of Europe.

Villa were far from perfect this weekend but ground out a 1-0 win at Southampton, as Ollie Watkins’ late goal secured a fifth win in seven games under the new head coach.

✅ Five wins from his first seven matches
✅ Wins against Man United, Brighton and Tottenham
✅ Three points off the top six after just three wins in their first thirteen games

Unai Emery has had an unbelievable start as Aston Villa manager 👏 pic.twitter.com/Unqer3WgcZ

Villa have already beaten Manchester United, Brighton and Tottenham under Emery’s management and are now just three points outside the top six. The Europa League specialist will be hoping he can lead Villa back into continental competition for the first time since 2010/11.

Ferguson the striking solution for Seagulls

For several seasons Brighton have lacked a reliable option at centre-forward, with the club’s failure to turn chances into goals a criticism of a side who have otherwise taken strides forward.

In each of their five seasons in the Premier League the Seagulls have underperformed in terms of xG. Across the past two campaigns, just three teams have performed worse than Brighton when it comes to turning clear-cut chances into goals and two of those were relegated to the Championship.

Brighton have been accused of being profligate in the final third but may just have unearthed the solution with another gem. Evan Ferguson has taken the step up into the Premier League with ease this season and is fast emerging as first-choice forward for Roberto De Zerbi.

Ferguson – who made his League of Ireland debut for Bohemians aged just 14 – is enjoying a breakthrough campaign at Brighton and took his total to five goals in eight games this season with a late equaliser against Leicester.

He was unfortunate to miss out on the starting side against the Foxes, but came off the bench to rescue a point with a brilliant glancing header from Pervis Estupinan’s cross.

The 18-year-old has scored three goals and laid on a further two assists in his five Premier League appearances this season, averaging a goal involvement every 40 minutes. No player who has played 90+ minutes – not even Erling Haaland – can better than ratio.

Ater turning down Liverpool to sign for Brighton, Ferguson has been rewarded with a clearer path to first-team football. He has taken his chance this season and already looks like the solution to Brighton’s wastefulness around goal. With the likes of Kaoru Mitoma and Solly March in fine form, Ferguson should have a supply of service to feast upon.

Where now for Everton?

Just where do Everton go from here?

This is now the worst start to a season in the club’s league history after a 2-0 defeat at West Ham condemned the Toffees to eight games without a win. Six of those have ended in losses, five of which have come against teams directly around them in the Premier League, placed 14th or lower.

Three points from safety and in torrid form, it appears the end for Frank Lampard. Lampard’s coaching career to date has failed to convince, but the problems at Everton are deep-rooted and far beyond the man in the dugout.

15 – Everton have collected just 15 points from their 20 games in the Premier League this season. Accounting for three points per win all-time, this is now their fewest points won after 20 games of any league season in their history. Unparalleled. pic.twitter.com/MLML0rhL2c

If, as expected, Lampard leaves the club the next manager will be the 12th man, including caretakers, to have taken charge at Everton since 2016. The failings begin at the top and a spend of £500m has somehow ended only in decline and the club’s current state of desperation.

Only Arsenal have spent more consecutive campaigns in the top tier than Everton, whose last taste of the second division was in 1953/54. Three teams will drop into the Championship this season and is there any argument that Everton are better than three of the sides around them? Right now, it’s difficult to argue that they are better than any.

Moshiri – whose attendance at West Ham was his first game in 14 months – faces some huge decisions in the coming weeks. After an era of bad decisions, he can not afford another.

Pep Guardiola has not made many mistakes during his time as Manchester City manager, but could his decision to allow Oleksandr Zinchenko to leave be one he comes to regret?

Few envisaged Arsenal emerging as City’s main challengers to the title last summer, during a transfer window in which Guardiola was prepared to allow Gabriel Jesus and Zinchenko depart for the north Londoners.

Fast forward to the present and Zinchenko has had a transformative impact on the Arsenal side. Under-appreciated at the Etihad, he is one of the first names on the team sheet for the league leaders and his £32m fee has fast become a bargain.

Schooled under Guardiola, Zinchenko has thrived in an unconventional left-back role for the Gunners, one which sees him invert into midfield with ease to build from the back or race forward to provide width down the left.

And one big hug from his manager. 🫂 pic.twitter.com/pDXl4YCuiP

The 26-year-old was outstanding during Arsenal’s 3-2 win over Manchester United this weekend, a result which extended the Gunners’ lead at the top to five points with a game-in-hand. In a thrilling contest, Zinchenko kept his cool and pushed Arsenal forward in search of a winner.

It was the kind of unflappable performance that comes with being in pressure situations before and the four-time Premier League winner has added vital experience to an inexperienced group at the Emirates.

Given his performances this season and City’s struggles at left-back during the current campaign, will his exit be a decision that Guardiola and the champions come to rue? His sale has strengthened a direct rival, one gaining in confidence about their championship credentials.