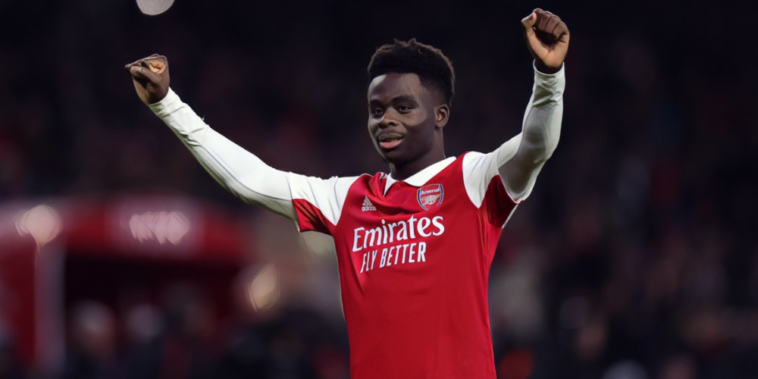 Arsenal maintained their lead at the top of the Premier League after a thrilling late win against Manchester United, after an Erling Haaland-inspired Manchester City had upped the pressure on the league leaders.

West Ham earned a vital win against fellow strugglers Everton, while the spoils were shared between Liverpool and Chelsea in a result that, in truth, suits neither side.

Aston Villa’s improvement under Unai Emery continued with a 1-0 win at Southampton as Ollie Watkins’ late goal made it 16 points from an available 21 under the new head coach.

At the opposite end Emi Martinez produced a commanding performance to keep a clean sheet, with the World Cup winner calm in possession and alert to make stops from Adam Armstrong and Lyanco.

The best of the lot came from Moussa Djenepo as Martinez clawed away his curling effort and – after a difficult start to the season – Villa are now 11th and looking upward.

Newcastle set a new club record of 15 top-flight games without defeat after a goalless draw at Crystal Palace.

Eddie Howe’s side were the better side but were unable to find a breakthrough at Selhurst Park, despite another fine performance from Kieran Trippier. The England right-back is having a superb season and was at his best once again at Palace, leading his teammates for touches (101) and tackles (5).

Trippier also had most touches (101) and tackles (5) for Newcastle tonight pic.twitter.com/8CaDbgAyiT

Trippier – who leads the Premier League for crosses this season – fired in 16 crosses and created eight chances, the most any defender has created in a Premier League game since 2012.

The evergreen excellence of Thiago Silva was on show as Chelsea battled to a goalless draw at Liverpool.

The Brazilian was in the right place at the right time on several occasions for the Blues, including a vital goal-saving header and crucial block from Naby Keita’s volleyed effort. He made six clearances, three blocks and three clearances, while recording a 91% pass accuracy with intelligent distribution from the back.

He later used all his experience to contain the threat of Darwin Nunez, narrowing the angle for the Liverpool forward in what threatened to be a mismatch of pace on the break. Still, at 38, so so good.

Max Wober has made an instant impact since his arrival at Leeds this month and shone during an impressive full debut at Brentford this weekend.

Wober was solid in defence as he combined some big challenges with a composure in possession, dealing with the threat of the in-form Ivan Toney and bringing out the best in Robin Koch alongside him at centre-back.

The early signs from the Austrian are encouraging and Leeds will hope Wober develops into a leader after a commanding first start. A clean sheet for the former Salzburg centre-back was an ideal first step.

A brilliant performance from a brilliant signing.

Is Zinchenko a left-back? Or is he a midfielder? For much of the season he has been both and his ability to invert from full-back or maraud forward down the touchline has been invaluable to Arsenal.

Against Manchester United his influence was evident as the Ukrainian helped the Gunners exert extended pressure on the visitors, pressure which was eventually rewarded with a late winner that maintains their advantage at the top of the division.

Zinchenko on when he joined Arsenal:

"I started to speak in the dressing room like, guys forget top three or whatever, we need to think about the title. Some of them were laughing, but now no one is laughing.”

His influence grew in the second-half as Arsenal went in search of a crucial breakthrough. Under-appreciated at Manchester City, he has been the perfect fit for Mikel Arteta’s side.

A crucial cog in the winning machine that Mikel Arteta has built. Granit Xhaka’s importance to Arsenal should not be understated and the Swiss midfielder again performed his role with excellence in the left-sided axis alongside Zinchenko.

Xhaka defended with discipline and carved out four chances for the Gunners, with his wonderful cross leading to the opener as Eddie Nketiah got across his marker to meet the midfielder’s delivery.

Manchester City kept in touch with Arsenal at the top of the Premier League with a 3-0 win over Wolves, as the champions cruised to success at the Etihad.

Kevin De Bruyne created three chances for the home and side and rekindled his connection with Erling Haaland, producing a perfect cross for the Norwegian to head home the opener. De Bruyne has now provided 12 assists in the Premier League this season, matching his total from last season.

Kevin De Bruyne has assisted Erling Haaland five times in the Premier League this season for Manchester City – this is the most assists by one player for another in the competition this term pic.twitter.com/PgDke0Zq7v

He has more assists than any other player in Europe’s top five leagues and five of those have come for Haaland in a formidable understanding. It is a duo that will be tasked with firing City towards silverware this season.

Luke Shaw will have known better than most the threat Bukayo Saka can provide, but the Manchester United left-back had no answer to his England teammate at the Emirates.

Saka was the standout in a huge win for Arsenal as he tormented Shaw in an unplayable performance, driving forward time and time against with the visitor’s backing off in retreat.

Their inability to get close enough to the 21-year-old was punished in spectacular fashion as Saka lashed in a thumping effort from the edge of the area, the highlight of a performance in which he led his teammates for duels and fouls won.

Saka is already one of the Premier League’s most influential talents and might not have even scratched the surface of what he’s capable of. That’s a thought that will be welcomed at Arsenal and feared by Premier League full-backs.

In the mood from early on during Brighton’s draw at Leicester, the Japan international showcased fine footwork in tight areas of the pitch.

Mitoma has been a revelation for the Seagulls in recent weeks as Premier League defenders have struggled to deal with his direct dribbling. Timothy Castagne was the latest to struggle up against Mitoma, who breezed past the Foxes full-back to curl home a stunning opener from outside the box.

He now has five goals and assists in his last five appearances for Brighton and appears to be getting better and better with each performance. His ability to isolate and beat defenders is a joy to watch.

Another clinic of finishing from a footballer enjoying the most astonishing of debut seasons in English football.

Haaland’s hat-trick – his fourth in the Premier League this season – earned Manchester City a comfortable 3-0 win over Wolves and improved his stunning goal record. The Norwegian now has 25 league goals this season, more than the Golden Boot-winning hauls from each of the last four campaigns.

Incredibly, he still has 18 games remaining to set new standards that now appear a formality. A special, special talent.

There were fears that Arsenal’s title challenge could unravel following Gabriel Jesus’ injury, but Eddie Nketiah’s performances have ensured the Brazilian has barely been missed in north London.

It’s now four goals in five league appearances for Nketiah since the restart, after the forward rose to the occasion with a double as Arsenal beat Manchester United 3-2 this weekend.

He caught Aaron Wan-Bissaka sleeping to head home an equaliser for Arsenal at the Emirates, before finding a late winner as he reacted first to steer in Martin Odegaard’s effort from close range.

The highest of compliments for Eddie Nketiah 🔥 pic.twitter.com/UXgMjQR6BE

The relief and euphoria around the Emirates was palpable at full-time and Nketiah’s match-winning moment will be remembered as a crucial part of the campaign if Arsenal go on to secure a first league title since the club’s Invincibles campaign in 2003/04.

The team is good