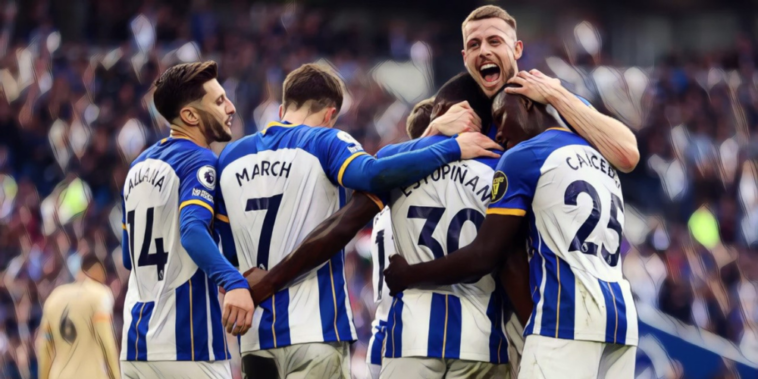 Brighton’s supporters made their feelings known towards Graham Potter this weekend, as the former manager was loudly booed upon his first return to the Amex Stadium.

Potter insisted post-match that he had little to apologise for, having said that the offer from Chelsea was too good to turn down. The move to Chelsea provides Potter with greater resources and a chance to test himself at a higher level, but the timing of his exit – just weeks into the new season – has clearly rankled with the Seagulls support.

This weekend proved that the former Brighton boss left his old side in rude health however, as Roberto De Zerbi earned his first win against the man he replaced. Brighton were rampant in an impressive performance at the Amex, hounding the visitors in possession and forcing mistakes from Chelsea’s stunned side.

I four one would like to relive yesterday. 👀 pic.twitter.com/lmjVkSJ5zA

Pervis Estupinan looks a sound replacement for Marc Cucurella, who was overwhelmed on his own return to the club. Leandro Trossard and Solly March are playing the best football of their Premier League careers, while in Alexis Mac Allister and Moises Caicedo the Seagulls have an engine room that can compete with any in the division.

De Zerbi is now the man in charge and is implementing his own ideas, but Potter’s principles were evident and haunted him at his old stomping ground. Brighton might be unhappy with the manner of his exit, but there’s plenty to be thankful for from his tenure.

Ivan Toney’s form has faltered at a far-from-ideal time, as the Brentford forward looks to earn his place in England’s World Cup plans.

Toney began the season in outstanding form for the Bees with five goals in six games and remains the second-highest English goalscorer in the Premier League this season, behind Harry Kane.

The 26-year-old has been less prolific in recent weeks however, and has scored just once from open play in seven games since early September. Toney’s lack of goals in recent fixtures has come with the forward dropping ever deeper in search of increased involvement. Whether that be by design or through frustration, it has resulted in a barren run for open-play goals at a time where he will have wanted to underline his England credentials.

A booking against Wolves means he will be suspended for this weekend’s trip to Nottingham Forest, leaving just one more fixture – a trip to face champions Manchester City at the Etihad – before the pause for the World Cup.

With Callum Wilson and Marcus Rashford in fine form and the likes of Tammy Abraham, Ollie Watkins and Dominic Calvert-Lewin more established in Southgate’s set-up, will Toney miss out on a place in Qatar?

Arteta can call upon backup brigade

Questions were asked whether Arsenal were suffering from fatigue following a recent downturn in performances, with dropped points at Southampton followed by defeat to PSV Eindhoven in the Europa League in midweek.

Mikel Arteta’s line-up has rarely been altered during the Gunners’ strong start to the Premier League campaign, with eight players having started each of the club’s 12 league games to date. Martin Odegaard has also started 11 of those 12 games, with rotation minimal during the campaign’s opening months.

Bukayo Saka’s early injury during this weekend’s win over Nottingham Forest will have seen alarm bells rings, but an unlikely deputy stepped up for Arsenal with an impressive performance. Reiss Nelson might have thought his Arsenal career was all but over after an unsuccessful loan at Feyenoord last season, with the 22-year-old having failed to feature for a single minute in the Premier League this term.

What a performance off the bench. 💪 pic.twitter.com/isEgSexU0x

Nelson was backed for a bright future following his initial emergence, but has since struggled to establish himself at senior level. He grabbed a rare chance with both hands at the weekend, scoring twice and creating another as Forest were thrashed 5-0 at the Emirates.

It was the winger’s first league start for Arsenal for more than two-and-a-half years, but Nelson proved he can be an effective contributor when called upon. That will be encouraging for Arteta as he looks to avoid burnout.

Liverpool’s season is unraveling, and fast, with the latest loss – a 2-1 home defeat to a Leeds team without a win in their previous eight games – a huge concern.

Jurgen Klopp’s team has looked a pale imitation of what it once was this season, with the characteristics of their successful era rarely seen during a campaign of trouble and disappointment.

Klopp’s excuses of tiredness and injuries carry weight but will soon wear thin, if the Reds are unable to keep in touch with the top four. Challenging Manchester City at the top of the division takes almost flawless consistency, but trailing newly-promoted Fulham is unacceptable despite the issues.

Liverpool are closer to the relegation zone than the top four 💀 pic.twitter.com/Qu4q8QQ85f

Liverpool are closer to the bottom three than the top four and with the likes of Manchester United, Tottenham, Arsenal and Newcastle all improved from last term, the Reds are in danger of giving themselves an impossible mountain to climb.

Klopp’s team travel to Tottenham this weekend in what appears a must-not-lose fixture, with an eight-point gap already to the Champions League places, albeit with a game in hand. The club’s season could hinge on their next two games and positive results are needed before the season’s break. The World Cup will give Klopp and his management team time to reflect, assess and plan a route out of choppy waters.

Modern football has moved away from traditional target men, with towering centre-forwards of aerial dominance often deemed a throwback.

Kieffer Moore demonstrated just how successful a more direct approach can be, however, as the Bournemouth forward tormented Tottenham during his side’s narrow 3-2 defeat to the north Londoners.

Moore provided Spurs with a warning sign as he rose to power Lewis Cook’s corner just over the bar early on, before netting a brilliance brace to put Gary O’Neill’s side 2-0 ahead. His first was a fine first-time finish into the bottom corner, before he showcased his strength and desire to get onto crosses with a flying header from Adam Smith’s cross.

The Wales international shrugged off Emerson Royal to get on the end of Smith’s delivery and crash his header in off the underside of the crossbar. Moore’s style isn’t particularly fashionable, but when utilised, it can still be mightily effective.

England’s centre-back options will not be in for an easy afternoon should the 6ft 5in Moore lead the line for Wales in Qatar next month.