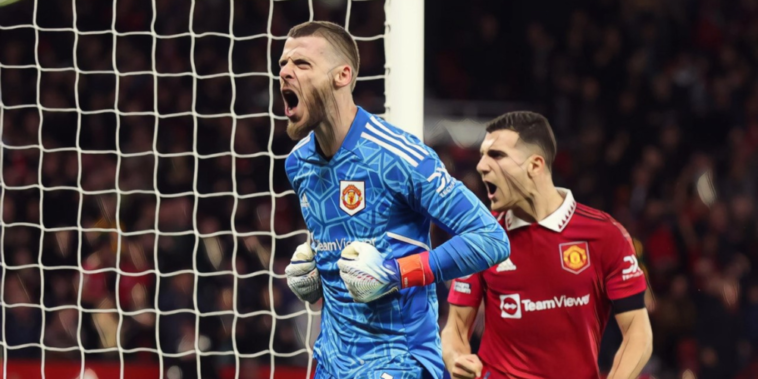 David de Gea has not been capped for Spain since 2020, but that did not prevent his absence from La Roja’s World Cup squad causing headline news. National managers have named expanded provisional squads of up to 55 players ahead of Qatar, with De Gea left out of even that sizeable squad.

The 31-year-old has found himself as sixth-choice goalkeeper in a decline of status for the Spanish, a surprise on the evidence of his shot-stopping heroics this weekend.

De Gea was superb as Manchester United battled to a 1-0 win over West Ham, making a number of athletic interventions to preserve his side’s lead.

Luis Enrique has discussed his desire for a goalkeeper who builds attacks and ‘transmits peace’, with three of the goalkeepers ahead of De Gea in the international reckoning residing in the Premier League.

De Gea’s distribution has been questioned, but it is debatable whether any of Brentford’s David Raya, Brighton’s Robert Sanchez or Chelsea’s Kepa Arrizabalaga are as able when it comes to basic principles of reflexes and shot-stopping.

De Gea has now kept a clean sheet in each of his last five games at Old Trafford across all competitions, with his contribution crucial to the club’s latest shut-out.

Liverpool’s list of poor performers this weekend was a long one, as the Reds lost at home to Leeds. It was a first home defeat since March 2021 for Jurgen Klopp and his side, who gifted Leeds an early opener following a calamitous mix-up.

Joe Gomez was the guilty culprit for Liverpool, after the defender’s blind pass inside provided Rodrigo with an open goal he couldn’t miss. Gomez failed to look before playing a pass back to Alisson, who had moved from his goal-line to create the angle. The result was a disastrous mistake, as Alisson slipped in his attempt to retrieve the pass and Rodrigo gleefully accepted the invitation to open the scoring.

A 𝘿𝙄𝙎𝘼𝙎𝙏𝙍𝙊𝙐𝙎 mistake from Joe Gomez! 🤯🤯

It was the latest mistake from Gomez who, for the exception of an outstanding performance against Manchester City, has appeared a player who has missed plenty of football in recent seasons.

Virgil van Dijk – who was sluggish for Leeds’ late winner as his unbeaten home record as a Liverpool player was ended – and the horribly out-of-form Fabinho are fortunate to escape inclusion here.

What a season so far for Miguel Almiron.

A footballer once derided for a lack of end product is enjoying the purplest of purple patches right now, with the Paraguayan scoring his sixth goal in six games during Newcastle’s 4-0 thrashing of Aston Villa.

Almiron scored just eight league goals across the past three-and-a-half campaigns for the Magpies, but has seven for the season to date after another stunning strike against Villa. The 28-year-old has been given less defensive responsibility under Eddie Howe and is rewarding his manager’s faith, utilising his relentless running to penetrate opposition defences.

One of the most in-form players in the Premier League right now, his goal was a special strike from a player full of confidence as Almiron continued his own personal Goal of the Season competition.

Chelsea were battered at Brighton as the Seagulls stunned their former manager and his side, with Potter’s tactics backfiring against familiar opposition. The decision to use Raheem Sterling and Christian Pulisic as wing-backs was a bad one, with neither offering the required defensive support at the Amex Stadium.

What a day for Brighton 🔥 pic.twitter.com/PS9sNw3MH8

Marc Cucurella was continually exposed as Solly March tormented Brighton’s reigning Player of the Year, who struggled badly on his first return to the South Coast and saw every touch booed. Cucurella has underwhelmed since arriving at Chelsea in a £62m deal, but was afforded little protection from Potter who admitted his former side made him look ‘a bit of a fool’.

“The responsibility for those two (Pulisic and Sterling) wasn’t to defend against their wing-backs, but I understand that whenever you do something and it doesn’t work you look a bit of a fool,” said Potter. “That is how it is. I have to accept that, deal with that, do better, and I’ll learn. That’s the process.”

Rodrigo Bentancur came up clutch for Spurs for the second time in a week, as the midfielder came off the bench to complete the club’s comeback victory at Bournemouth.

Bentancur’s equaliser had rescued a draw against Sporting Lisbon in midweek, before his introduction changed the course of the contest against Gary O’Neill’s side this weekend.

Spurs trailed before Bentancur’s arrival and the change helped the north Londoners exert greater control on the midfield.

The Uruguayan was proactive in possession and worked hard without it, adding composure and drive to the midfield. Late on he scored a stoppage winner with an ice-cold finish at the second attempt, scoring a crucial result-altering goal for the second successive fixture.

Spurs are a better team when Bentancur is at the heart of the side.

Diego Costa has left Wolves in real trouble, with the fiery forward delivering his latest moment of madness during the club’s 1-1 draw at Brentford.

Costa was signed on a free transfer to help ease the club’s striker shortage, but will now miss the club’s next three games after his late red card against the Bees. Taking exception to the tight marking of Ben Mee, the Spaniard shoved his head into the direction of the Brentford defender and received a red card for his troubles.

Diego Costa receives a straight red card for a headbutt on Ben Mee.

Welcome back to the Premier League 🙃 pic.twitter.com/uBnLvzbKiv

Wolves are without a permanent manager and in real trouble, the threat of relegation becoming ever more realistic as their goal-shy side struggle for results. Costa’s campaign will not resume until after the break for the World Cup and Wolves – already without Raul Jimenez and Sasa Kalajdzic – face another centre-forward crisis.

England’s number one lived up that billing after a superb show of shot-stopping earned Everton a point at Fulham.

The arrivals of Conor Coady and James Tarkowski have been credited with contributing to Everton’s defensive improvement this season, but Pickford’s performances have also been a major positive for Frank Lampard.

At times the goalkeeper appeared on a one-man mission to repel the Cottagers, as he made a string of first-half saves to keep the game goalless. He denied Aleksandar Mitrovic and Willian with more excellent stops after the break and appears to be heading towards the World Cup in impressive form.

Aston Villa’s renaissance proved short-lived after crashing to a 4-0 loss at Newcastle, with new manager Unai Emery now well aware of the task facing him as he prepares to take charge.

Villa were humbled during a second half siege from Newcastle at St James’ Park, with Matty Cash given a torrid time up against Joelinton. The Brazilian was full of bustle and dynamism in a role off the left and Cash struggled to deal with his physical threat.

The right-back has been below the standards of last season this term and was exposed all afternoon, with interim boss Aaron Danks hooking Cash after Newcastle scored their fourth goal of the afternoon.