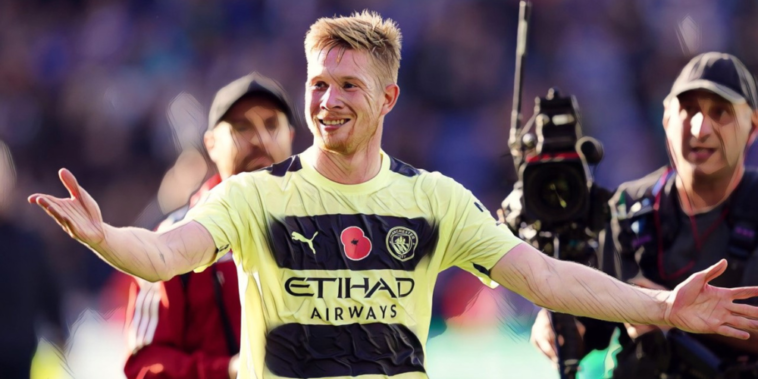 Graham Potter endured an unhappy return to Brighton as Chelsea were thrashed at his former side, while Leeds stunned Liverpool to become the first team to win a Premier League game at Anfield since March 2021.

There were big wins for Arsenal and Newcastle to keep their ambitions alive at the top, while Spurs left it late to secure a comeback at Bournemouth.

An outstanding performance from Meslier helped Leeds to a first win at Liverpool in more than two decades, as Jesse Marsch’s struggling side stunned Anfield with a late winner.

Meslier recovered from a suspect start to keep his side in the contest with a number of crucial moments, as the Frenchman made nine saves – the most a goalkeeper has recorded in a Premier League fixture so far this season – including seven from close range.

No goalkeeper has made more saves in a single #PL match this season than Illan Meslier's nine for @LUFC 🧤#LIVLEE pic.twitter.com/pjxGbt6Jyr

A brilliant stop one-against-one from Darwin Nunez was a highlight, with Meslier’s display vital to Leeds’ success as the Whites climbed out of the Premier League’s bottom three.

Diogo Dalot just keeps on getting better and better at Manchester United, with the right-back among the most improved players of the Premier League campaign to date.

Dalot was fantastic in the Red Devils’ 1-0 win over West Ham, a result which saw Erik ten Hag’s team dig deep to grind out three points and keep alive their top four ambitions.

Outstanding in every area of the pitch. 👏 pic.twitter.com/NOMSvD1ht1

The Portugal international was brilliant at both ends of the pitch, as he won five duels, made five clearances and created four chances. There’s much to admire about Dalot’s game this season, with his usual attacking adventure now coming alongside a genuine desire to defend. Always aware at the back post as the Hammers pushed forward, he made a number of key interventions.

Brighton produced a brilliant performance to earn Roberto De Zerbi his first win as manager, as the Seagulls stunned former boss Graham Potter with a 4-1 win against Chelsea.

Lewis Dunk led his team to an impressive three points, with the centre-back winning duels and spraying an impressive collection of passes out from the back. Dunk’s positional play was excellent at the Amex and the Seagulls’ supporters continue to bang the drum for the 30-year-old’s England inclusion. He looks well-suited to the demands and system of new manager De Zerbi.

Lisandro Martinez is having some season at Manchester United with the defender having been among the club’s most consistent performers. The Argentine added another strong showing to his increasing collection against West Ham, as he won his duels with Gianluca Scamacca and then Michail Antonio in the Red Devils’ 1-0 win at Old Trafford.

Martinez made four blocks, won 5/6 duels and recorded a 92% pass accuracy in another display of committed defending. The early season doubts about his suitability to English football seem an ever distant memory, with Martinez making a mockery of suggestions he could struggle this season due to his lack of height.

Estupinan had his best game in a Brighton shirt as the Seagulls thrashed Chelsea 4-1 this weekend, with the Ecuadorian excellent among a team packed full of stand-out showings.

The summer signing raided down the left flank with well-timed runs all afternoon for Brighton, producing calm and composed delivery when in the final third. His understanding with Moises Caicedo and Kaoru Mitoma was encouraging for Roberto De Zerbi, while he created the third goal as his low delivery was diverted into his own goal by Trevoh Chalobah.

Buzzing for the victory! Class performance from every player on the pitch today! 💪🏽🔵⚪ @OfficialBHAFC pic.twitter.com/PMAEZQc3um

Tyler Adams has fast become a crucial cog in the Leeds team and emphasised just why he was badly missed in last weekend’s loss to Fulham. The American covered the ground in combative fashion at Liverpool, as he snapped into tackles and redistributed possession with assuredness.

The 23-year-old was so often in the right place at the right time to disrupt the home side’s attacks, in a performance full of the fight that will be required to keep Leeds in the division this season.

No player on the pitch made more ball recoveries than Adams (12), with his appetite for the less glamorous side of the game having made the summer signing from Leipzig a fan favourite at Elland Road.

Thomas Partey was back to his best as Arsenal registered a comfortable 5-0 win over Nottingham Forest on Sunday. There’s often a direct correlation between Partey’s performances and those of Arsenal, with the Gunners a better team when the midfielder is in form and firing.

The Ghana international controlled proceedings from the centre of the pitch, winning challenges and providing probing passes out to the flank. His goal was the best of Arsenal’s five of the afternoon, as he arrived onto Reiss Nelson’s cut-back to slam home a stunning strike from distance.

Kevin De Bruyne looked Manchester City’s likeliest avenue to goal in the absence of Erling Haaland this weekend, as the champions were made to be patient against a Leicester team who defended deep and in numbers.

The Foxes frustrated City for periods with a low block, but De Bruyne produced a moment of magic to earn City all three points.

No other player has scored more goals outside of the box than Kevin de Bruyne since he debuted for Man City 🚀 pic.twitter.com/wT2VhthX0j

De Bruyne’s free-kick could hardly have been more perfect as he struck a stunning set-piece into the top corner for the winner. No goalkeeper in the world could have saved it, a piece of genius from perhaps the Premier League’s finest footballer.

Reiss Nelson was the surprise catalyst behind Arsenal’s second-half thrashing of Nottingham Forest, as the Gunners ran riot after the break to win 5-0 at the Emirates.

Nelson had not played a single minute in the Premier League so far this season, but was an early introduction after Bukayo Saka fell awkwardly following a challenge from Renan Lodi. Nelson has struggled to find a role at Arsenal since coming through the academy ranks, but stole the show in the second period with two goals and an assist.

The 22-year-old was a constant danger down the right flank and took his chance in some style. His first goal was an excellent finish at the second attempt, before adding a second moments later as he turned home a cross from Gabriel Jesus. Nelson added an assist after teeing up Thomas Partey’s spectacular strike and will hope he has done enough to earn a regular run in the side – should Saka face a spell on the sidelines.

Newcastle’s momentum is building and Eddie Howe’s team have a top four place on merit, with an emphatic win over Aston Villa making it three consecutive league victories.

Joelinton was a menacing presence for the visitors as Newcastle won 4-0 at St James’ Park, with the 26-year-old all-action in a role off the left. Full of his usual endeavour and powerful running, Joelinton grabbed the goal his performance deserved after turning home a rebound for his first in the Premier League this season.

It was a performance full of infectious energy and a well-timed display from Joelinton, with Brazil manager Tite a keen observer. The uncapped midfielder will have done his chances of gatecrashing the Selecao’s World Cup squad no harm at all.

Callum Wilson was another name who will have impressed an onlooking international manager, with Gareth Southgate in attendance as the forward terrorised Aston Villa at St James’ Park.

Wilson was a constant threat as Villa struggled to deal with his sharp movement, scoring twice in a convincing win for the home side. He confidently slammed home a penalty for his first, before heading home Kieran Trippier’s cross in a link-up that will have caught Southgate’s attention.

Past fitness problems will be a concern for the England boss, but Wilson is arguably the in-form option among the group of centre-forwards pushing for Qatar. Only Harry Kane can better his minute-per-goal ratio among the contenders this season, with Wilson having scored six goals in nine Premier League appearances so far this season.