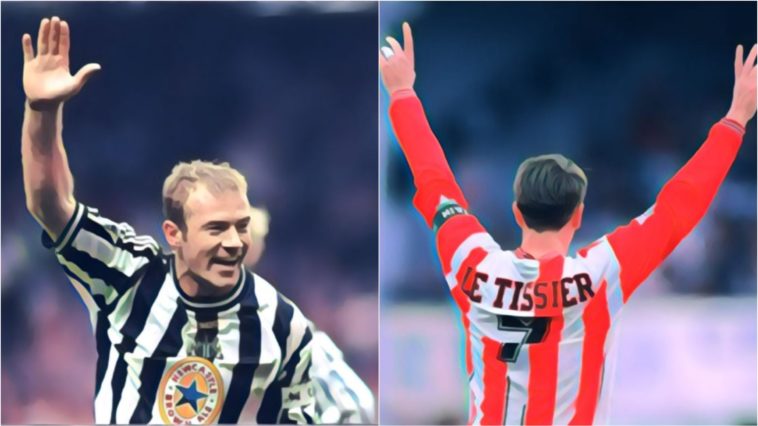 Who is the greatest scorer of golazos in the history of the Premier League?

Full disclosure here: we’re using a fairly narrow definition of what one might call a golazo merchant. Generally speaking, a golazo simply refers to an amazing goal, which is quite a broad category. Seeing as the Premier League has been littered with dozens and dozens of fabulous goalscorers over the last 26 years, we could be here all day listing them out, banging our heads against a wall trying to pick one out of them all. So yeah, we’re not going to do that.

Instead, we’re looking specifically at players who were known for rattling the net with the ball at such velocity that it would earn a fine from a traffic cop. The kind of players who could really thwack a ball from distance at any given time, but still shocked you when they pulled it off. The ballers who could smack a round object into space like a rocket or volley it into the next millennium. What we want are pure, unadulterated thunder bastards.

Five of the Premier League’s greatest ever golazo scorers:

When you score a cracking goal in the dying moments of a game against literally one of the most unbeatable sides of the Premier League era to win the game on your debut, then you’re legacy is already guaranteed.

But Wayne Rooney didn’t stop there, scoring countless wonder goals for Everton, Manchester United and England over the next 15 years of his career before leaving the Premier League for MLS, where he currently plays for DC United.

Arguably his best golazo came against Newcastle United in 2005, when his volley hit the back of the net like a thunderbolt, sending Old Trafford into delirium. Incredibly he took the shot while suffering from a dead leg, and was about to be subbed off.

The Liverpudlian hit the ball as if it had insulted his mother and wore a grouchy expression on his face during his celebration of the goal, but he later admitted that he was annoyed at the time by the referee not calling fouls made by Alan Shearer. Be warned, opposition defenders: do not make Wayne Rooney angry.

“Only Matthew Le Tissier can score goals like that” was such a common refrain during the nineties that Sky Sports could have just replayed the same bit of audio every Saturday when Southampton took to the field.

Just like Rooney against Newcastle, Le Tiss was about to be substituted before completing his most famous goal. You can even see Ian Branfoot tell the player about to come on to sit back down after the goal goes in.

There’s a reason he was referred to as ‘Le God’ down on the south coast, and it had nothing to do with an oath of celibacy. Although his ability on the ball was pure sex at times, his mercurial nature and maverick spirit were at odds with the established school of thought among many of English football’s gatekeepers.

His own manager had benched him for the previous five games leading up to that fixture against the Magpies in 1993, citing the midfielder’s poor work rate as his reasoning. Branfoot was gone by January, while Le Tissier went on to become a club icon.

When the Czech attacking midfielder joined Liverpool, he said it was “the greatest day in my football life”. Injuries were an intermittent nuisance during his spell at the club in the late nineties and early noughties, but his pace and rocket of a left foot helped him to become a bit of a Merseyside cult hero.

Berger’s belter of a free kick at Old Trafford is particularly nice:

Fun fact: Patrik Berger won international caps for both Czechoslovakia and the Czech Republic after the dissolution of the state in 1993. Eleven years later he scored this worldy for Portsmouth:

Is this pearler from Patrik Berger for Portsmouth against Charlton. 👏 pic.twitter.com/GpuQaYSdYT

A winger and a set piece specialist by trade, Laurent Robert was capable of hitting a target from distance with incredible power and accuracy, as illustrated by this spectacular goal against Spurs in 2003:

Is from golazo king Laurent Robert, with this Thunderbastard for Newcastle against Spurs in 2003. 🤟 pic.twitter.com/MifcBay2QW

The Frenchman could pelt the football from any angle and it would still break the speed of light, rooting goalkeepers to their line as if time had stopped the moment he struck it. As the cliché goes, when he hit the ball it stayed hit.

Although Robert left Newcastle in a cloud of disgruntlement, he will always be remembered by the Geordie faithful for his exquisite free-kick technique, moments of exceptional skill and his penchant for hitting the net like a bullet.

See Also: Players with most goals from free kicks in Premier League history

The Newcastle United legend may have scored a lot of penalties and a fair amount of close-range goals among his record-breaking tally of 260 in the Premier League, but on many an occasion, Alan Shearer also caused commentators to go hoarse in their reaction to one his outstanding belters.

Is this rocket from the @premierleague all-time leading goal scorer @alanshearer 🚀🚀🚀 pic.twitter.com/HoCoWi5gCi

The former England international would never complete his childhood dream of lifting a trophy in the black and stripes of his local club, but he did bring them awfully close on a few occasions. In 1999 he powered them into an FA Cup final with an outrageous outswinging shot from the edge of the box against Spurs.

What do you think of when you think of Tony Yeboah? It’s ridiculous strikes like this one against Liverpool in 1995:

Is this banger from @LUFC legend Tony Yeboah against @LFC 🚀🚀🚀 pic.twitter.com/DsqS2p1OXu

It is quite possibly one of the most stunning shots we have ever seen or will ever see in the Premier League, but remarkably it wasn’t a once off for the Ghanaian, who specialised in thunderous long-range efforts. It’s not even the only time he’s hit a shot just like the one against the Reds for Leeds United, with his mind-bending finish against Wimbledon in the same year proving it wasn’t a fluke.

It was Yeboah’s goal against Liverpool that won the goal of the season award, however, which was the wrong decision in this writer’s opinion, but to be fair deciding between the two is almost unfair considering the quality of them. That finish against the Dons will surely never be topped in the Premier League though.

Read: Glenn Hoddle – The Preacher Who Lost His Starting Place in the Game