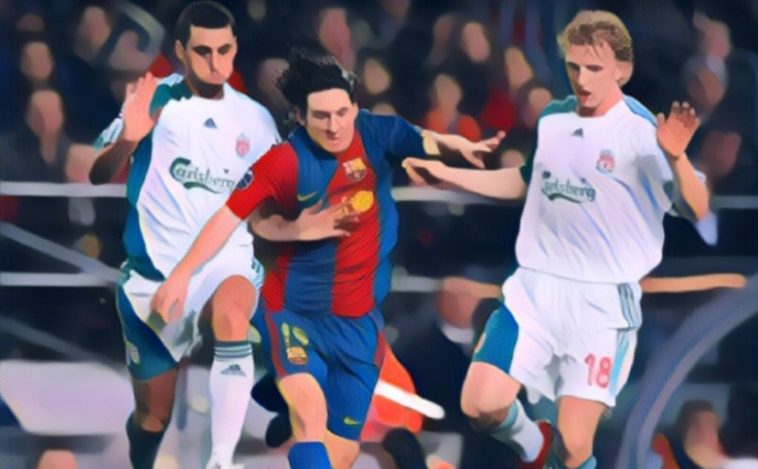 Liverpool host Barcelona tonight with the hopes of overturning a 3-0 deficit. If they did so it would be one of the most stunning comebacks in the history of European football.

Last week’s meeting between the two was actually the first time Barça have beaten the English club at the Nou Camp, which is a bit bonkers when you think about it.

There have been some epic contests featuring Liverpool over the years, and their matches with Spanish sides are no exception. In 41 meetings with clubs from Spain, they have won 15, drawn 12, and lost 14.

Their record against La Liga teams has been rotten of late, however, losing six of the last nine games, adding an extra layer to the task facing them this week.

This is one of those games where you really just have to let the highlights package speak for itself, as this is possibly one of the funnest European finals you’ll ever watch.

The 2001 Uefa Cup final witnessed one of football’s most decorated clubs facing a proper minnow who had only been promoted from Spain’s second tier just three years previously.

Liverpool defeated AS Roma, FC Porto and Barcelona, among others, on their way to the showpiece match in the Westfalenstadion, but Deportivo Alaves turned out to be their most stubborn opponents of all.

The Reds went into the half with a 3-1 lead thanks to goals from Markus Babbel, Steven Gerrard and a Gary McAllister penalty, but the Basque outfit hit back after the break with a Javi Moreno brace. Robbie Fowler appeared to win it with a goal in the 73rd minute, until Jordi Cruyff scored a dramatic equaliser with a minute to go.

The game seemed destined to head to penalties until a McAllister cross met the head of defender Delfi Geli, who tragically put it into his own goal. Under the golden goal rule the tie was over, thus completing the club’s resurgence under Gerard Houllier.

If you’re looking for a game with plenty of speculative long-range shots that go horribly wide, this is the game for you! That’s hardly surprising considering this fixture contained players such as Steven Gerrard, Patrik Berger, Rivaldo and Fabio Rochemback. Still, this was an entertaining match featuring star names, some quality goals, and a comeback.

Liverpool took lead with a very Michael Owen finish, cutting the ball back across the goal as the goalkeeper — the fabulously named Roberto Bonano — comes rushing out of his goal. That sublime finish would be cancelled out by a Rivaldo half-volley just four minutes before the interval.

Early in the second-half Owen missed an open goal which would turn out to be their best chance to retake the lead. Barcelona didn’t pass up the opportunity to take advantage.

After a lovely bit of one-touch football between Patrick Kluivert and Rivaldo, Rochemback hit one of his trademark screamers from outside the box, giving his side the lead for the first time in the match.

Marc Overmars would kill the tie off with six minutes of normal time left. With Liverpool chasing an equaliser, they left acres of spaces at the back for the former Arsenal attacker to run into. A young Xavi spotted this, playing a perfect pass in behind for the Dutchman, who rounded Jerzy Dudek before supplying a tap-in.

The two sides would play out an altogether more placid contest four months later at the Nou Camp, ending in a scoreless draw.

Liverpool would have to wait another six years before they could exact revenge on the Catalans, when they met in the first knockout round of the Champions League in 2007, although it is mostly remembered for a bust-up between two teammates that same week.

This was a meeting between the previous two winners of the competition, something we don’t get enough of really, although the reigning champions were considered good value for retaining their title.

Barcelona still had much of the majority of that squad intact, adding Gianluca Zambrotta from Juventus, while Lionel Messi had become a key component of the side. They dominated the opening exchanges, and made it count with a goal from Deco.

A howler from Victor Valdes gifted the Reds an equaliser, as the Spaniard failed to hold onto Craig Bellamy’s header just two minutes before the break. The goalkeeper was clearly rattled, as he unthinkingly picked up a back pass later in the game.

Liverpool would then take a decisive lead with just over 15 minutes to go, as John Arne Riise smashed the ball into the roof of the net. Barça would win the return leg at Anfield 1-0, but bowed out on the away goals rule.

The identity of the goalscorers was a tad ironic, given the events of the week preceding the game. After a team night out during a warm weather training camp, Bellamy attacked Riise with a golf club in his hotel room. The Norwegian later wrote that he was lucky his shins weren’t broken and career ended there and then.

The Welsh forward celebrated his equaliser by performing a mock golf swing, revealing the “sincerity of his apology” for his cowardly act of violence.

If ever you think something you want to accomplish is beyond the realms of possibility, just remind yourself that Liverpool once defeated Real Madrid by four goals without response with a team featuring Ryan Babel, Alvaro Arbeloa and Martin Skrtel.

The writing was on the wall early on when Steven Gerrard linked up with Fernando Torres, who easily bypassed the defence and had his shot saved by the fingertips of Iker Casillas. The Spanish goalie would save them again just moments later when he tipped a stunning Javier Mascherano volley onto the crossbar.

Casillas could only keep them out for so long, however, as further atrocious defending left him exposed, allowing Torres to tap the ball in from close range. From that point on the floodgates opened.

Gerrard would grab a brace, before Andrea Dossena (who?) put the tie beyond all doubt with just a minute left in normal time, winning 5-0 on aggregate to put the Reds into the quarter-finals where they would be eliminated by Chelsea.

It was arguably Torres’ finest performance for the Merseyside outfit, and this was the peak for Rafael Benitez’s charges. They would lose out on the Premier League title to Manchester United, while a year later they would lose a Europa League semi-final to Real’s less illustrious rivals, Atletico. The manager would be gone after that season.

Just over a year after Sevilla roasted them in the Europa League final, Liverpool appeared to have turned the tide in quality between the two sides.

The Reds blitzed their Andalusian hosts in the first-half, as a Roberto Firmino brace and one from Sadio Mane gave them a commanding lead. The Brazilian striker even performed a cheeky no-look finish, although the team’s hubris would come back to bite them.

Ben Yedder clawed one back early on in the second-half, before completing a brace on the hour mark with a penalty. It was a very nervy final half hour for Liverpool, but they appeared to have weathered the storm. That was until a 90th-minute corner found its way to Guido Pizarro and the comeback was complete.

This was a very typical performance from Jurgen Klopp’s charges at the time: building up a big lead early on in the game by blitzing the opposition, but allowing them back into the game with their vulnerability at the back. Most teams were not good enough to take advantage of it that season, but Sevilla had the necessary quality to make Liverpool pay.

Liverpool did make it all the way to the Champions League final at the end of the season, falling to a 3-1 defeat to Real Madrid. It says a lot about the job Klopp has done that their revised style now sees them controlling games a lot more, leading to less end-to-end games like this, but has seen them reach over 90 points in the league.

Read: The greatest Man United vs Barcelona matches in history