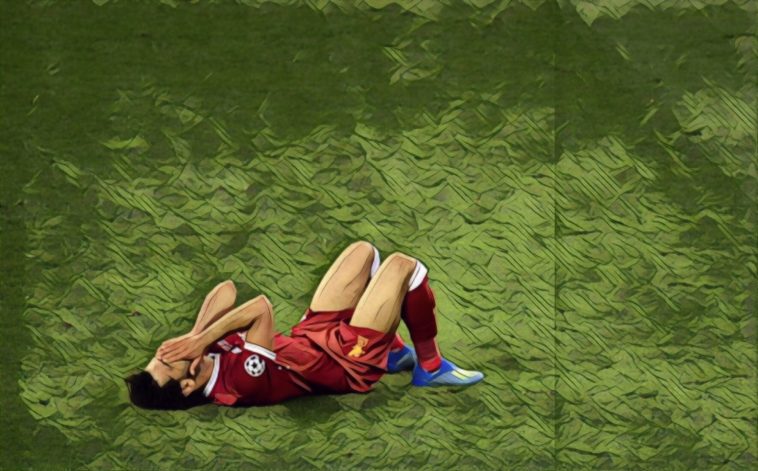 There have been some very weird injuries incurred by footballers over the years, featuring salad cream, dog piss, and an infected pimple.

Footballers are never too far away from their next injury. They might be supremely fit and have the physique of a Greek god, but you never know what’s around the corner, waiting to give your next torn ACL.

Liverpool goalkeeper Adrian didn’t suffer anything as bad as that at the start of the season, but he did hurt himself in a very random and unusual fashion.

As the Spaniard was celebrating the Premier League side’s Uefa Super Cup triumph on penalties over Chelsea with his teammates, a spectator came out of nowhere and crashed into the back of the players.

Adrian’s ankle swelled up and he was a doubt for the Reds’ clash with Southampton that same weekend, but it turns out he’s hard as granite and played through it. But that’s not even the weirdest injury to have been inflicted on a footballer.

Five of the weirdest injuries footballers have suffered:

A hard nut was David Batty, but the former Newcastle United player was no match for his three-year-old daughter’s tricycle, which she crashed into his leg while he was recovering from an ankle ligament injury in 1999. The collision damaged his Achilles tendon, putting the Leeds United man on the shelf for a few more weeks.

Five of the weirdest goals in Premier League history

There is a well-worn path of goalkeepers injuring themselves by dropping things on their foot, which is deeply ironic when you think about it. Wimbledon’s FA Cup-winning hero Dave Beasant is one such goalie, after he dropped a jar of salad cream, severing tendons in his big toe in 1993.

At the time Beasant was playing for Chelsea under the management of Glenn Hoddle, and the injury effectively ended his Blues career.

Look, accidents happen. But slipping on dog piss? That’s just hilarious. It wasn’t so funny for former Chelsea player Darren Barnard though, who managed to tear knee ligaments after falling over his mutt’s urine in the kitchen.

Playing for Barnsley in 1999 when it happened, the injury kept the midfielder out for five months.

Who makes it into Football’s Ultimate Shithouse XI?

Returning to our series of Goalkeepers Dropping Things On Their Feet, Santiago Canizares let slip of a bottle of aftershave in 2002, severing a tendon.

It was bad enough that the Valencia goalkeeper lost consecutive Champions League finals, but the peroxide haired goalie missed out on the World Cup.

“I do not consider myself to be unlucky by any means,” he said at the time, but it effectively ended his reign as Spain’s number one, losing out to a certain Iker Casillas.

They say modern footballers are too soft these days, and Marco Asensio did nothing to combat that notion when the Real Madrid youngster was forced to miss the first Champions League game of the 2017/18 season due to… an infected pimple on his leg after shaving. Honestly.