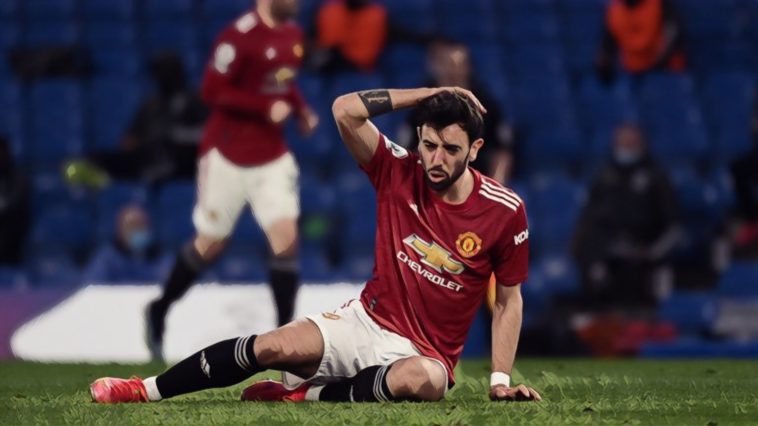 This week we look at Manchester United’s run of bore draws in the biggest games, Manchester City’s keep on winning, and why Brighton are the kings of expected goals.

Getting a point at Stamford Bridge is never a bad result, particularly when it extends your unbeaten away record to 20 matches. But Sunday night’s result did represent a growing problem for Manchester United.

The 0-0 draw with Chelsea was their fourth consecutive goalless stalemate in a match against a so-called Big Six side. They’ve also failed to score a single goal in their last six Premier League meetings with Arsenal, Chelsea, Liverpool, Man City or Spurs.

And the only goal they’ve scored against any of those teams in the league this season? A Bruno Fernandes penalty in the 6-1 defeat to Tottenham.

What’s behind this spate of boring contests between Man United and the biggest teams? That hammering by Spurs is partly to blame, as Ole Gunnar Solskjaer evidently does not want his side to be so badly exposed again.

But the Norwegian set out his team in a familiar fashion last season and his team had a much better Big Six record, so what gives? Man United’s opponents show them more respect now, as they are fully aware how dangerous they are on the counter. Liverpool and Man City, in particular, were happy to take a point so long as it stopped United on the break.

But it cannot be ignored that United lack a cohesive attacking strategy, instead relying on the individual quality of their attacking players to break down the opposition. If they want to make the step up to the next level, then a more sophisticated gameplan in the final third is needed for the bigger matches.

After a disappointing 2019/20 season, Manchester City have evidently activated the cheat code that turns them into an unstoppable winning machine, just as they were during their previous title-winning campaigns under Pep Guardiola.

Their 2-1 win over West Ham United on Sunday was their 20th straight win in all competitions, a record for an English club. It’s also the third-longest ever winning run of any team from one of Europe’s big five leagues.

Man City have avoided defeat in their last 27 matches, winning 24 and drawing three. They’ve also gone 18 league matches without going behind, one behind the record set by Arsenal.

The victory didn’t just put City 12 points clear at the top of the Premier League table, but it also represented a major milestone for Guardiola; two in fact.

⭐ 20 straight wins in all competitions for Man City

It was the Catalan’s 500th win as a football manager and his 200th in charge of Man City. He’s done so in just 273 games, by far the quickest of any manager in English top-flight history. The closest is José Mourinho, who did so in 309 matches.

Ruben Dias’ first goal for the club and John Stones’ winner means that the centre-back pair have actually scored more goals (4) than they have conceded (3) in the 14 league matches they have played together.

Kevin De Bruyne’s assist for Dias’ opener was the 77th of his Premier League career, putting him in the top ten all-time list of assist-makers since 1992.

What do Brighton and an infant child have in common? They can’t finish their dinner.

For real though, the story of Brighton’s season is outplaying the opposition but failing to put away their chances. The 1-0 defeat to West Brom was a microcosm of that.

Their finishing has been terrible this season, and their expected goals (xG) numbers bear that out. The Seagulls have scored 26 goals in 26 games, but according to Understat they could have expected to score up to 40.98. That is a monumental difference, and almost certainly the main reason they are still in a relegation battle.

That +14.98 difference between their xG and their actual goals is the largest in the Premier League, with the next nearest being Sheffield United on +10.37.

Let's talk about Brighton a bit.
Every once in a while a team comes up with an extreme difference between outcome (xG) and process (goals). In Brighton's case it's as extreme as it has ever been and we can learn a lot from it. pic.twitter.com/PezuM9CT8v

In their past seven league games they have created 15.04xG, yet have only scored five goals. The West Brom result was their biggest travesty in this regard though, having four big chances, two of which were penalties, and missing all four.

Brighton’s xG is the sixth-best in the division while their xG conceded is the third-best, illustrating the extreme discrepancy between their position in the table and the level of their performance. But at least they can call themselves the xG champions at the end of the season.

Read: Ranking the five PL players with the most goals and assists this season