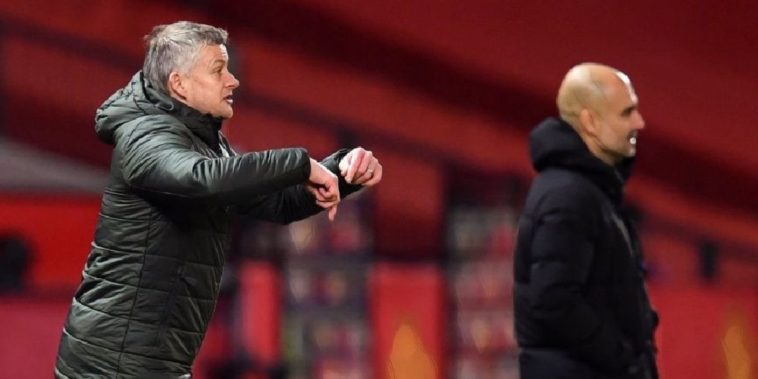 Gary Neville has discussed why Manchester United have ‘a far better chance of winning the league’ under Ole Gunnar Solskjaer than former manager Jose Mourinho.

United currently sit second in the Premier League but have seen hope of a title challenge falter following three draws in their past four league fixtures, including a goalless draw with Chelsea at Stamford Bridge this weekend.

Sunday’s stalemate leaves the Red Devils 12 points adrift of league leaders Manchester City, with the club’s hopes of securing a first Premier League title in eight years growing ever distant given the imperious form of their cross-city rivals.

Man United have failed to maintain a sustained title challenge since the retirement of former manager Sir Alex Ferguson in 2013, though Neville believes the current side are now better placed than in recent seasons to compete.

Neville has pointed towards the Red Devils’ impressive unbeaten record away from home as a sign of the club’s improved character and ‘resilience’, with United having not lost on the road in the Premier League for more than a calendar year.

The former defender believes that run is a positive sign of a team with ‘better spirit’ than in previous campaigns and says the current side are better equipped to challenge than the team guided to a runners-up finish under Jose Mourinho in 2017/18.

“Over the last 12 months, Manchester United have put an incredible run of results together. The points tally has been big, year to year,” he said on the Gary Neville podcast.

“Their away form is outstanding and that that takes some resilience, to go 20 games unbeaten away from home. It takes some.

“I come back to my time at Manchester United, if I came to Stamford Bridge, and we kept a clean sheet and we came away with a point. We quite often lost to Chelsea at Old Trafford, let alone at Stamford Bridge, we had a poor record against them. You always want to win every single game – but this is a tough place to play.

“So those Manchester United players going back on that bus tonight can say that they’ve taken part in those 20 matches away from home, they deserve great congratulations for that. There’ll be some criticism from United fans saying why didn’t they go and win it, why weren’t they more positive, and rightly so. United should always strive to do that.

“But to actually go 20 games away from home needs applauding because it’s hard to do that. What do you use to demonstrate teams that have got good character and personality? They’re good away from home, they’re good on set pieces, they look like they want to play with each other.