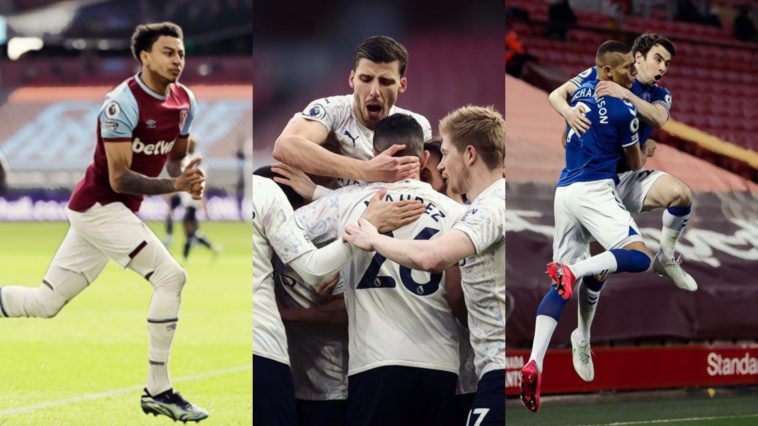 This week we look at the historic numbers behind Everton’s win over Liverpool, Arsenal’s terrible record against the extraordinary Manchester City, and West Ham United moving into the top four.

Everton’s win over Liverpool is significant not just because it was the Toffees’ first win in the Merseyside Derby since 2010, but because it solidifies Liverpool’s worst run of form in the Post-War era.

Having gone four years without defeat at Anfield prior to the New Year, the Reds have now lost four consecutive home games in the Premier League for the first time in 98 years. It’s nineteen years since they lost four league games in a row of any description.

It is truly apocalyptic form for the reigning champions, who have scored just one league goal in 2021 – the lowest of any team in the division.

For the blue half of the city the victory will go down in history for the right reasons, namely because it’s their first win at Anfield since 1999 after 23 previous attempts. Everton have now scored more goals at Liverpool’s home ground than Liverpool themselves this calendar year.

It was also a meaningful win for manager Carlo Ancelotti, as he has defeated Liverpool with five different clubs: AC Milan, Chelsea, Real Madrid, Napoli, and Everton. Not too shabby.

With every game Manchester City scale ever greater heights. Their 1-0 win over Arsenal on Sunday was their eighteenth in a row in all competitions, the longest winning run in the history of English domestic football.

Man City are also unbeaten in their past 25 games across all competitions (W22 D3), which is their second-longest run without defeat under Guardiola. Their best run was a 28-game spell between April and December 2017.

Their seemingly invincible defence kept their 15th clean sheet in the Premier League this season. The only teams to keep as many after 25 games were Manchester United (19) and Chelsea (15) in the 2008/09 campaign. Remarkably, a third of all the goals they have conceded this term came back in September 2020.

This fixture has quickly become one of the most predictable in English football, with Man City winning their last eight meetings with the Gunners. That is the North Londoner’s joint-longest run of consecutive league defeats against an opponent, along with an eight-game run versus Leeds United between 1973 and 1976.

Arsenal‘s 34 points after 25 games is only three points better off than at the same point last season. Their next worst record at this stage of a campaign was in 1994-95 when they had won just 32 points.

Following a 2-1 defeat to West Ham United on Sunday, Tottenham Hotspur have won just one of their last six Premier League matches, losing the other five. That is Jose Mourinho’s worst ever run as a manager, and gives him the lowest win percentage of any Spurs manager since Juande Ramos.

Sunday’s encounter was Mourinho’s 50th Premier League game with Tottenham (W23 D12 L15). The 81 points Spurs have picked up under the Portuguese is 14 fewer than he’s managed with any other side throughout his first 50 league games in charge (Man United, 95).

Not had more in a @premierleague game in over 4 years

The Hammers’ win means it’s the first time they have managed not to lose against the Lilywhites in a campaign since 2013/14 when they did the double over their London rivals.

West Ham now sit fourth in the table, nine points clear of ninth-placed Spurs with a game extra played. It’s the first time they will spend a night in the top four after at least 25 matches have been played since 1985-86, when they finished the season in third.

Jesse Lingard has been a big part of their great form since joining in January. The Manchester United loanee has scored three goals in four league games under David Moyes for West Ham, as many as he netted in his 36 total league appearances under Ole Gunnar Solskjaer at Man Utd.

Get him on the plane, Gareth 🛫😉 pic.twitter.com/L4VBDqvmIA

Rebooting his career in claret and blue, Jesse Lingard is making up for lost time

Leeds United lost to Wolves on Friday when Adama Traoré’s rasping shot cannoned off the crossbar and bounced in off the back of goalkeeper Illan Meslier.

Unfortunately for the French shot stopper, that makes him the youngest goalkeeper to score an own goal in Premier League history at 20 years and 354 days.

After beating Sheffield United 1-0 on Saturday evening and getting their first league win at Goodison Park last Sunday, Fulham have as many wins in the past week as they managed in the first 22 games of the campaign. The Cottagers have lost just one of the last six matches and are just three points from safety.

Ademola Lookman, who scored the second-half winner, has more direct goal involvements than any other Fulham player this season (four goals, three assists). Andre-Frank Zambo Anguissa, meanwhile, completed 12 take-ons against the Blades, the most by any player in a single game this season.

Sheffield United remain bottom of the table with 11 points after 25 games and just one clean sheet, the fewest of any team in the Premier League.