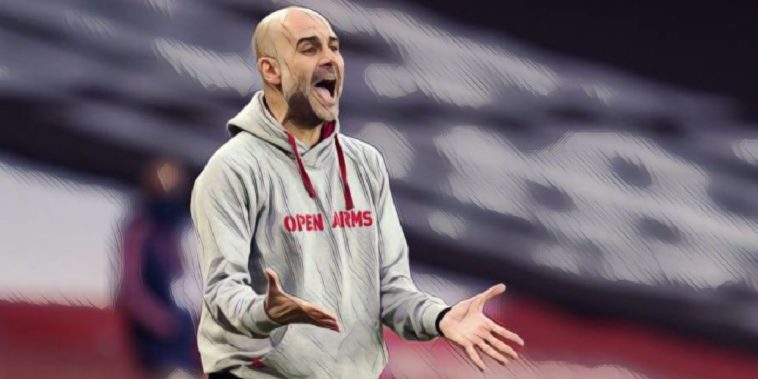 Manchester City made it 18 straight wins as Pep Guardiola’s side recorded a 1-0 win against his former assistant, Mikel Arteta.

Man City got themselves off to a rapid start, taking the lead through Raheem Sterling inside two minutes. The England international finding space in between the Arsenal centre-backs, rising highest to get onto the end a Riyad Mahrez cross, before steering his header expertly past Bernd Leno.

In honesty, Sterling could arguably have had a hat-trick inside the opening 20 minutes or so, such was City’s domination, Arsenal only starting to get a foothold as the game approached the interval.

City had virtually strolled through much of the first half, though Arsenal came out with much more aggression in their pressing after the break, with neither side creating too much in terms of chances.

The best chance of the second period saw Joao Cancelo driving at the Arsenal defence before exchanging passes with Gabriel Jesus. The Portuguese full-back cut inside his man, before attempting to curl one with the outside of his right boot, only for his effort just to drift wide of Leno’s post.

While Arsenal were improved, you never really got the feeling that a goal was imminent, with City’s defence once again looking imperious as they held on to maintain their 15th clean sheet of the campaign and restore their 10 point advantage at the top of the table.

Speaking afterwards Pep Guardiola was full of praise for the man who used to be his assistant boss.

“It was hard like we expected it would be. We suffered a lot,” the Catalan told Sky Sports. “It’s difficult to play against Arsenal and Mikel [Arteta], that’s why I give the players incredible credit for this victory.

11 – Manchester City have equalled the record for consecutive away wins by an English top-flight team across all competitions (11), which was previously set by Pep Guardiola’s side between May and November 2017. Domination. pic.twitter.com/2X4sMDqL0O

“Mikel knows everything. He’s so good. It’s not because he’s my friend. He’s so clever. I learn a lot watching his teams. Today I learned something that I can use in the future. He knows everything about football.

“People look at our run of wins and think it’s so easy. I didn’t expect it. I’m more than grateful for these players for what they’re doing, but winning these games 1-0 is what we need to do.

“The last 10-15 minutes was brilliant. We didn’t push the action, the action came through the passes and movements in the right tempo.

“At half-time we adjusted our pressing and won a lot of balls. In the first half we could not. The second half was better. We didn’t create chances but enough to win the game.

“Fernandinho commanded absolutely everything in the middle. We need everyone. Now having a game every three days with travel, I’m going to have to rotate the team. It’s impossible to sustain this rhythm.

“We now have four games in a row in the Premier League. We know what we want to do. We want to make a big step.”

Next up for Manchester City is the return of their European campaign, the Premier League leaders travelling to Germany to take on Borussia Monchengladbach.