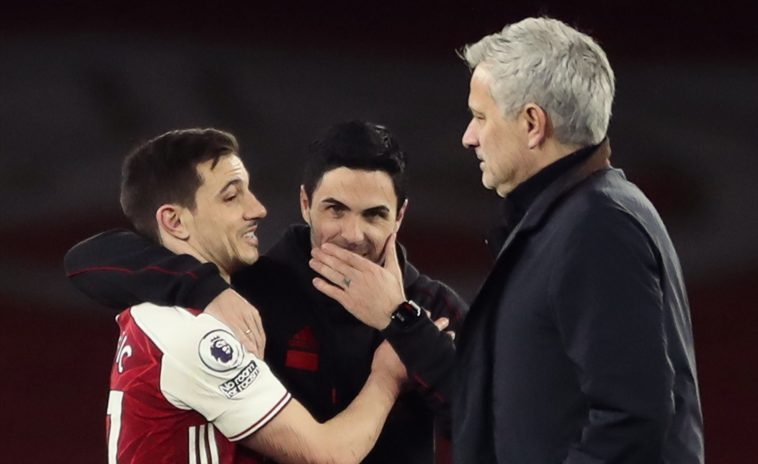 This week we look at Arsenal getting one over on Tottenham Hotspur, Chelsea’s strong defence holding Leeds United to a scoreless draw, and Manchester United’s solid run of form.

Arsenal continued their home dominance over Tottenham in the north London derby with a 2-1 comeback victory on Sunday. Mikel Arteta’s men are now unbeaten in their last ten Premier League matches against Spurs at the Emirates.

The Gunners are adept at chasing a lead against their local rivals, winning six of the last 21 such derbies when conceding the first goal. Spurs have now dropped 45 points from winning positions against Arsenal in the league – the most of any team against a specific opponent in the competition. That stat feels particularly Spursy.

For José Mourinho this was just his second loss against Arsenal in 19 league matches. It was also his ninth defeat of the season, the joint-most he has ever suffered in a single league campaign in his managerial career (also nine in 2015-16 with Chelsea).

Érik Lamela gave the Lilywhites the lead with his phenomenal Rabona finish after coming on as a first-half substitute. The Argentine subsequently became just the fifth substitute in Premier League history to score and be sent off in the same game, after David Lee (1993), Bobby Zamora (2007), Ivan Klasnic (2010) and Hal Robson-Kanu (2017).

Martin Odegaard’s equaliser makes the Norwegian the fourth player to score his first Premier League goal in a north London derby for Arsenal, after Nicklas Bendtner (2007), Per Mertesacker (2012) and Lucas Torreira (2018).

Leeds United and Chelsea’s rivalry was rekindled in a Premier League match at Elland Road for the first time since the pair drew 1-1 at the ground in 2003, but the contest didn’t live up to the hype. While it was a better goalless draw than many of the ones we have endured in recent months, the two sides cancelled each other out more than anything.

It was the Blues’ staunch defence that ruled the afternoon kickoff on Saturday, although Kai Havertz could have changed that narrative had he scored one of his three big chances.

The manager’s effect is clear to see, as the team have gone 12 games unbeaten in all competitions. That is the joint-longest unbeaten start by a manager in the club’s history, alongside Luiz Felipe Scolari.

The defence has been the backbone of that run, which has revitalised the west London outfit’s season. In that time they have conceded the fewest goals (2), shots (67), shots in the box (35), and expected goals (4.22 xGA) in the league.

The key difference between the German tactician and his predecessor Frank Lampard is exemplified in the amount of 0-0 draws they have had of late. Chelsea have already had three scoreless stalemates under Tuchel, whereas they had just two in 57 games under Lampard.

To put Chelsea’s defensive solidity into context, Southampton have conceded 30 goals in 11 games since Tuchel’s debut. On the flip side, Chelsea have only scored 11 goals.

Although Manchester United’s form had hit some stumbling blocks of late, their 1-0 win over West Ham United on Sunday means that they have lost just one of their past 23 matches in the Premier League (W14 D8), having suffered three defeats in their opening six games of the season. Bizarrely, that one defeat came against bottom dwellers Sheffield United.

Man United have now kept four successive clean sheets in the Premier League for the first time in over three years, since January 2018 under then-manager José Mourinho.

Ole Gunnar Solskjaer’s side managed to stop West Ham from taking any shots on target, the first time that has happened to the Hammers when they’ve taken seven or more shots since 2013.

See Also: Why Zaha is no longer taking the knee – and why it’s important