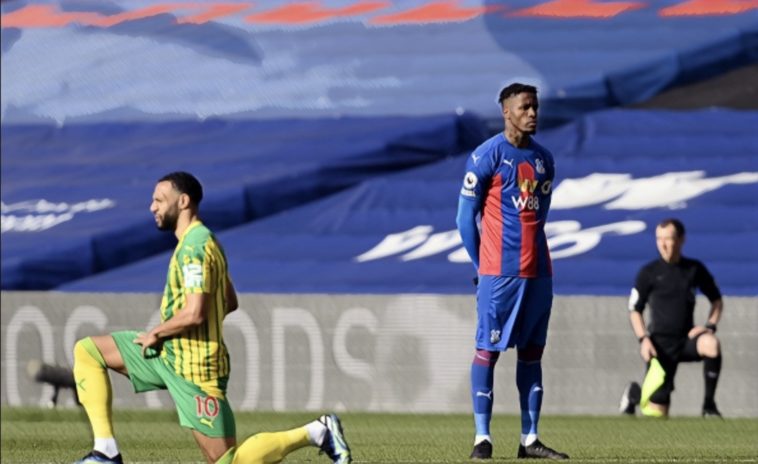 The Crystal Palace winger instead chose to “stand tall” ahead of the match with West Brom, something he had said in February he was going to do but hadn’t started a game since then due to injury.

Zaha released a statement ahead of kick-off outlining his intention to do so and his reasons for it.

“My decision to stand at kick-off has been public knowledge for a couple of weeks now,” the Ivorian international said.

“There is no right or wrong decision, but for me personally I feel kneeling has just become a part of the pre-match routine and at the moment it doesn’t matter whether we kneel or stand, some of us still continue to receive abuse.

“I know there is a lot of work being done behind the scenes at the Premier League and other authorities to make change, and I fully respect that, and everyone involved. I also fully respect my teammates and players at other clubs who continue to take the knee.

“As a society, I feel we should be encouraging better education in schools, and social media companies should be taking stronger action against people who abuse others online – not just footballers.

“I now just want to focus on football and enjoy being back playing on the pitch.

“I will continue to stand tall.”

It is important to note that this is neither a rebuke of taking the knee before games nor of the Black Lives Matter movement. As Zaha said in his statement, he “fully respects” everyone who partakes in kneeling.

In fact, the vast majority of players still support using the gesture before games, according to a survey by the Professional Footballers’ Association in December.

The problem, as Zaha sees it, is just that: it is merely a gesture and does not stop racism from happening in and of itself.

Taking the knee was never intended to do that, rather it is a means of showing solidarity across racial lines. But it’s clear to see why Zaha is frustrated by the lack of progress.

Footballers have continued to be racially abused on social media on a regular basis. Black players such as Anthony Martial, Marcus Rashford, Paul Pogba, Lauren James and Romaine Sawyers, among many others, have all received racial abuse online in recent months.

In September, at the beginning of the 2020/21 season, Kick It Out revealed there has been a 42 percent increase in reports of discrimination. Reports of racism in the professional game rose by 53 percent.

In February, Zaha told the FT Business of Football conference that he intended to stop taking the knee because the protest was no longer sufficient. He suggested that it had not worked because players are still suffering online.

It will interesting to see how many other Premier League footballers follow Zaha’s lead and call for greater action on the part of the authorities and social media companies.