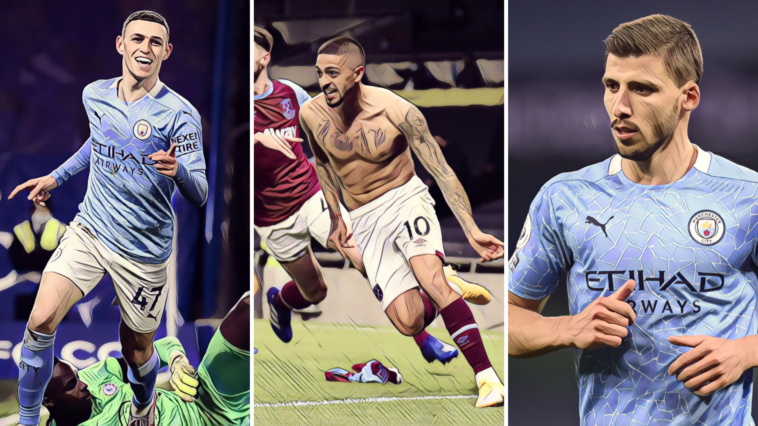 We’ve reached the end of what has been a fascinating Premier League season, one that has seen more than its fair share of upsets, shocks and surprises.

Manchester City are the new Premier League champions after sealing a third crown in four seasons, with Pep Guardiola once again showing his ability to build a dominant title-winning side.

There was less positive news for Fulham, West Brom and Sheffield United however, who will be watching the 2021/22 top-flight season from a distance after suffering relegation this time around.

Following the final round of fixtures, we’ve decided to reminisce on the season gone by and hand out our Premier League awards for the 2020/21 campaign.

Manchester City‘s disappointing 2019/20 title defence came amid a lack of defensive strength, their need for reinforcements at centre-back addressed with a spend of over £100m on Nathan Ake and Ruben Dias.

Dias arrived with a burgeoning reputation in a club-record deal from Benfica, but perhaps even the most optimistic of City fans would have not envisaged his transformative impact upon the side.

The club’s previous defensive weakness was turned into a position of huge strength, Guardiola’s side conceding less goals than any other side with Dias a rock at the heart of the defence.

◉ The first defender since Steve Nicol in 1989

◉ The third winner in their first season in England

The Portugal international became just the third player to win the FWA Footballer of the Year award in his first season in England and looks capable of being City’s defensive leader for seasons to come.

Phil Foden’s precocious talent has been known for some time, but this was arguably the season where the midfielder went from talented youngster to bona fide star.

Foden has been exceptional for City this season with 15 goals and eight assists in all competitions, including vital strikes in decisive wins over Chelsea, Tottenham and Liverpool.

Aside from that output, however, Foden is a pleasure to watch as he glides across Premier League pitches and the 20-year-old has the talent to be one of world football’s very finest over the next decade.

That is a magical individual goal! pic.twitter.com/QumfqACKg2

It’s difficult to look past Pep Guardiola, who navigated the pressure of an indifferent start to the campaign to right his side’s wrongs and power towards a third Premier League title.

Guardiola’s feat was all the more impressive given the absence of a recognised centre-forward throughout much of the campaign, whilst his range of tactical tweaks – from inverted full-backs to freeing Ilkay Gundogan – helped propel City to the title with little competition.

There will always be naysayers who point to the resources available to the Spaniard, but he remains the best mind in modern football and the man everyone is bidding to catch.

We’ve already covered what Dias has brought to Manchester City, and it’s difficult not to select him as the signing of the season, a player whose arrival instantly improved his side and had a transformative impact upon their campaign.

Sheffield United splashed out a club-record £24m to sign Rhian Brewster from Liverpool last summer, as the Blades looked to build on a ninth-placed finish upon their Premier League return in 2019/20.

Brewster had impressed for England’s youth teams and in the Championship on loan at Swansea, but failed to make an impact in a season of struggle at Bramall Lane.

Sheffield United failed to win in their opening 17 games of the season and will be playing their football in the second tier next term, where Brewster will hope to rebuild after failing to score or provide an assist in 26 league appearances.

Technique, timing and occasion – Manuel Lanzini’s stunning strike for West Ham against Tottenham earns our Goal of the Season accolade, an audacious effort to rescue the Hammers a point in a thrilling London derby.

West Ham found themselves three goals down after just 16 minutes against their cross-city rivals, a three-goal advantage Spurs would maintain until eight minutes from time.

Fabian Balbuena’s header and Davinson Sanchez’s own goal set up a grandstand finish, one that would have a glorious conclusion as Lanzini lashed home this stunner from distance to cap a quite remarkable comeback.

In a season like no other, it was perhaps unsurprising to see a fair number of shocks throughout the 2020/21 Premier League campaign.

Leicester’s 5-2 win at Manchester City and Tottenham’s 6-1 thumping of Manchester United were amongst the early season headline results, but perhaps nothing stunned the footballing world like Aston Villa’s seven-goal destruction of champions Liverpool.

Villa had narrowly avoided relegation during the previous season before kicking off the new campaign with back-to-back wins, though there would have been few who anticipated the events that would unfold as Dean Smith’s side became the first team to score seven against the reigning champions since Sunderland against Arsenal in 1953.

Ollie Watkins scored his first Villa goals with a hat-trick and Jack Grealish had a hand in five goals, in what was one of the most astonishing results of the Premier League era.

John Stones’ career at Manchester City appeared all but over heading into the new season, the defender linked with an exit during the summer following an inconsistent period of form.

Effectively fifth-choice centre-back as the season kicked-off, he made just one appearance across the club’s opening nine games before returning to the side against Burnley in November.

Stones helped City to keep a clean sheet and remained a fixture in the side over the rest of the season, forming a brilliant defensive partnership with Ruben Dias – conceding just four goals during a 15-game winning run between December and March.

The 26-year-old’s talents perfectly complimented summer signing Dias and led to an England recall, Stones set to feature for the Three Lions this summer after collecting his third Premier League winners’ medal.

Game of the Season: Liverpool 4-3 Leeds

The very first game of the Premier League season arguably proved to be its very best, as newly-promoted Leeds went toe-to-toe with the champions in their own backyard.

Marcelo Bielsa’s side showed the fearless approach that would define their season, equalising three times to peg back the Reds before falling to a late Mohamed Salah penalty.

Salah scored a hat-trick in a game that included defensive mistakes and an unrelenting willingness to attack from both sides, with goal-gluts following Leeds throughout the campaign as the Whites commendably threw caution to the wind.

Leeds have been a superb addition to the Premier League this season and this 90 minutes at Anfield was a microcosm of what the returning Yorkshire side would bring to the table.