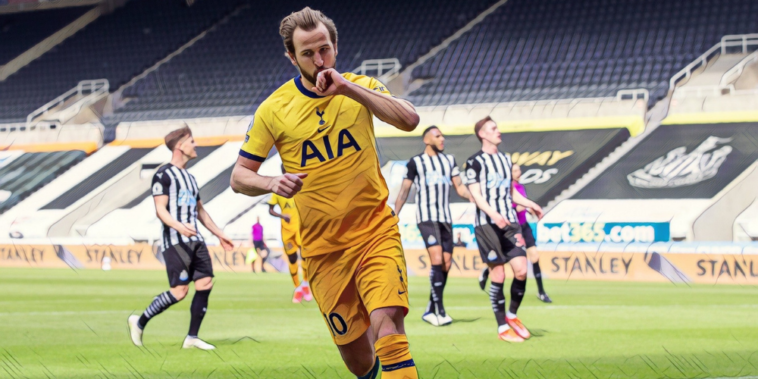 This weekend’s fixtures will bring the curtain down on the 2020/21 Premier League season, a campaign which has seen Manchester City reign supreme as England’s finest once again.

Leicester have continued their improvement under Brendan Rodgers and will hope to add to their historic FA Cup triumph with a top-four finish, whilst West Ham have bounced back from being relegation candidates last season to become European contenders this time around.

It’s been a less positive season for Liverpool, who had five players named in the divisional Team of the Year after being crowned champions last season but have struggled to replicate those performances this time around, the Reds hoping to salvage their season by securing Champions League qualification this week.

As we reach the conclusion of the campaign we’ve decided to look back at some of the season’s leading performers, here is The Football Faithful’s 2020/21 Premier League Team of the Year.

Aston Villa‘s positive season may have faded during Jack Grealish’s spell on the sidelines through injury, but this has no doubt been a campaign of improvement for Dean Smith’s team who looked like European contenders earlier in the campaign.

Key to their success has been several smart signings during last summer’s window, including the £20m capture of Emiliano Martinez from Arsenal with the Argentine having been keen to secure regular first-team football.

The Gunners’ loss has certainly proven to be Villa’s gain with Martinez having recorded 15 clean sheets, a figure that ranks behind only Ederson and Edouard Mendy in the race for the Golden Glove.

Emiliano Martinez has kept 1️⃣5️⃣ clean sheets in the #PL this season – the joint-most by an @AVFCOfficial goalkeeper in a single season in the competition#AVLEVE pic.twitter.com/HT62NKJ4nZ

Martinez’s achievements are all the more impressive given how busy has been in comparison to those names, only four goalkeepers – two of which are at relegated clubs – having made more than his 127 saves, whilst he ranks second behind only Burnley’s Nick Pope for save percentage.

Joao Cancelo has bounced back from a difficult debut season at Manchester City in some style, becoming one of the division’s most effective full-backs for much of the campaign.

Comfortable on either flank, the Portugal international has been more a nominal full-back, tucking into midfield to create overloads for the newly-crowned champions and popping up all over the pitch.

Cancelo’s performances have dipped slightly over the run-in but his unique role has been a major factor in City’s success this season, his average of 1.7 key passes per game the third-highest rank amongst Premier League defenders and he edges out teammate Kyle Walker at right-back.

John Stones’ career with Manchester City appeared to be heading nowhere as the season began, the defender effectively fifth-choice centre-back and linked with an Etihad exit.

After featuring just once over the club’s opening eight fixtures he was handed his chance following an indifferent start to the season for Pep Guardiola’s side, seizing it with both hands and forming a fine understanding with summer signing Ruben Dias.

City conceded just two goals in Stones’ first 14 league appearances of the season, that defensive run coming in the midst of a sequence of 15 consecutive wins that provided the champions with an unassailable lead at the top.

Stones’ class and composure perfectly complimented the more uncompromising Dias and should ensure he’s a certain starter for England at the Euros this summer.

Signing of the season and quite probably the Player of the Season, plenty was expected of Ruben Dias following his £62m club-record move from Benfica last summer.

Pep Guardiola has spent significantly on defensive additions before without fixing his side’s vulnerability, but the arrival of Dias almost instantly turned a weakness into a position of incredible strength.

Dias’ partnership with Stones laid the foundations for City’s charge towards the title, with the 24-year-old earning plaudits for both his individual performances and a priceless ability to make those around him better.

Dias’ brilliance this season may yet end with individual recognition and he looks set to be the leader of this City defence for the foreseeable future.

In a season in which several players have bounced back after being written off, Luke Shaw’s transformation has been one of the most remarkable.

Shaw has had no shortage of highs and lows during his seven seasons at Manchester United, but the 2020/21 campaign has proven to be his best with the 25-year-old undoubtedly the best left-back in the division.

Shaw has mixed endless energy with quality when in possession, ranking first amongst Premier League defenders for key passes and sixth across the division overall, his performances having seen him establish himself as one of the first names on Ole Gunnar Solskjaer’s teamsheet.

The challenge now will be maintaining the brilliant consistency he has shown this season, performances which have seen him return to the England fold ahead of this summer’s European Championship.

Another member of Manchester City’s title-winning contingent, Ilkay Gundogan stepped up when it mattered most to enjoy the best period of his career and drive Pep Guardiola’s side forward.

Gundogan had previously been an unassuming member of this squad, but in the absence of the injured Kevin De Bruyne proved he is much more than that, enjoying an incredible run of 11 goals in 12 games to spark City’s 15-game winning run over the festive period.

The Germany international had been tipped to be one of Europe’s best midfielders while at Borussia Dortmund, and this was the season when that label rang true with Gundogan’s class shining through.

In a period when City were struggling for inspiration, he took charge of the champion’s season.

The best player in the Premier League may not have been at quite the same heights as last season, but any version of Kevin De Bruyne is usually good enough to stand amongst the division’s best.

De Bruyne has scored five goals and provided a further 11 assists during the 2020/21 season, that latter figure the third-highest of any player across the Premier League.

He leads the division for assists per 90, expected assists per 90 and shot-creating actions per 90, with City an infinitely better team with the Belgium international at the heart of the side.

After some frustrating spells on the sidelines, City will hope the 29-year-old is fit and firing ahead of their Champions League final date with Chelsea on May 29.

Mason Mount – a player who will line up on the opposite side for that showpiece – is hugely unfortunate to miss out on selection in this XI with the England international having been brilliant as the effervescent conductor of the Chelsea team.

Bruno Fernandes’ instant impact at Manchester United has seen the midfielder lauded as one of the most transformative signings in Premier League history, his arrival mid-way through the 2019/20 season proving the catalyst for the club’s Champions League qualification.

Fernandes has followed up those performances with an excellent first full season in English football, scoring 18 league goals and providing 12 assists with only Harry Kane having been directly involved in more goals than the 30 from the Portuguese.

The 26-year-old also leads the Premier League rankings for key passes, expected assists and shot-creating actions, whilst he is second for pressures with his creativity and tenacity central to the Red Devils’ system.

Bruno Fernandes breaks Frank Lampard’s record for most goals scored by a Premier League midfielder in a single season, all comps (28) 💥 pic.twitter.com/jSDB4nDhOz

Fernandes is the hub of a side that have shown significant signs of improvement this term and is the player Ole Gunnar Solskjaer will build around as he bids to find a title-winning formula.

Liverpool have been far from the side we have seen in recent seasons this term, but that has not stopped Mohamed Salah continuing his remarkable goalscoring consistency.

Salah currently leads the Premier League’s scoring charts alongside Harry Kane with the duo’s battle for the Golden Boot set to go down to the wire, both players seeking a third career title – a feat only previously achieved by Alan Shearer and Thierry Henry.

The Egyptian has now scored 125 goals for the Reds in a little under four seasons on Merseyside, his continued and now expected excellence perhaps counting against him when it comes to individual recognition in 2020/21.

🎯 Mohamed Salah is the first PL player since 2017-18 to reach 20 away goals in all competitions in a season. His 20 goals have come in 25 appearances pic.twitter.com/VCsV5X2fNb

He makes our Team of the Season however, and could yet finish as the Premier League’s leading scorer for the third time in just four seasons.

Perhaps the most difficult selection on the teamsheet, we’ve chosen Phil Foden who becomes the sixth member of Manchester City’s title-winning side to make our best XI of 2020/21.

Jack Grealish’s outstanding showings pre-injury deserve a mention and perhaps recency bias has counted against the Aston Villa captain, whilst the brilliant Son Heung-Min has enjoyed the best Premier League season of his career for Spurs.

Foden however, is both exceptional and unique.

The 20-year-old may just be the most talented player of an emerging English generation and has grown in importance and influence at the Etihad this season, scoring 14 goals and providing eight assists in all competitions for Pep Guardiola’s side.

Foden floats around the pitch and weaves his way through defensive traffic as if it’s not there, whilst he has shown his ability to step up on the big occasions this season with pivotal goals in defining wins over Chelsea, Liverpool, Tottenham and Aston Villa.

Foden is a special talent and there is no limit on what he can achieve in the coming seasons.

The best centre-forward in English football and one of the finest number nines in the game, Harry Kane has been the shining light amongst much mediocrity at Tottenham this season.

Kane currently leads the Premier League for both goals and assists in 2020/21 with two games remaining, with the 27-year-old in contention to become the first player since Andy Cole in 1993/94 to finish top of both metrics outright.

The England captain has shown variety to his game this season and an increased willingness to drop deeper and make things happen, showcasing an excellent passing range with a number of brilliant assists.

Harry Kane has been directly involved in 35 Premier League goals this season, at least six more than any other player:

He might win the Golden Boot and the Playmaker Award. 🤯 pic.twitter.com/UQC9pXJw1g

His ruthless finishing and creativity have led to 35 goal involvements in just 33 appearances (22G/13A) and his talents perhaps belong on a bigger stage than Spurs can currently provide.

There will be a long list of takers if murmurs of a desire to leave north London prove true.