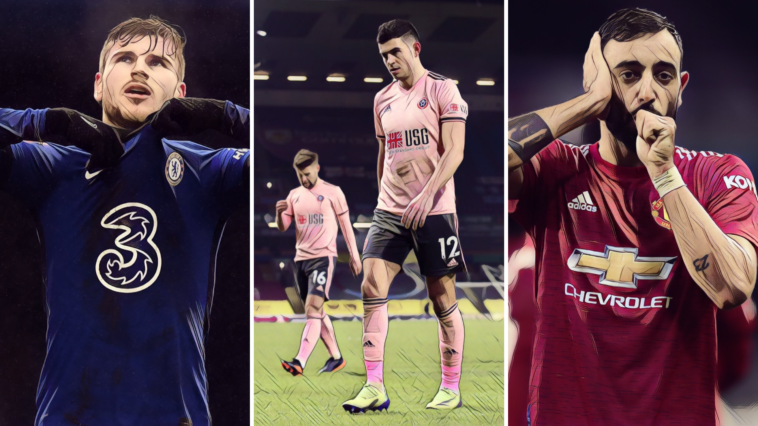 Much can happen over the course of a Premier League season and making predictions can often be a thankless task, but each season The Football Faithful writers make bold statements on how we see events unfolding.

This season has had no shortage of shocks and surprises and as the 2020/21 campaign reaches its conclusion, we’ve decided to look back on the very best and worst of our pre-season predictions.

Hindsight can be a truly wonderful thing.

Our writers threw in some interesting offerings for the ‘biggest fall from grace’ in 2020/21, with the likes of Dean Henderson, Frank Lampard and er, Manchester City amongst the nominations.

Easily amongst our best crystal ball moments however, was the call that Sheffield United would fail to replicate the incredible success of last season after finishing in the dizzying heights of ninth.

The Blades concerning run over the back end of 2019/20 was carried on into the new season, though perhaps no one foresaw the Yorkshire side enduring one of the worst ever Premier League campaigns to be relegated to the Championship – talk about Second Season Syndrome.

Signing of the season – Timo Werner

Chelsea’s wealth of expensive additions attracted our attention for best transfer of the campaign, with Timo Werner receiving multiple nominations from our writers.

The Germany international arrived with a burgeoning reputation after scoring 34 goals for RB Leipzig last season, but has failed to replicate that form in a testing campaign that has seen Werner spurn more than his fair share of clear-cut opportunities.

His commendable work-rate, perseverance and blistering pace have seen him retain his place in the Chelsea side, but a tally of six league goals is a paltry haul for a player who arrived amid big expectations.

Player of the Season – Bruno Fernandes

The individual accolades are yet to be awarded to truly confirm how accurate our predictions were, but there’s no doubting Bruno Fernandes has enjoyed a superb first full season at Manchester United.

Ruben Dias or another of Manchester City’s title-winning vintage, or perhaps even Harry Kane, may pip Fernandes to the Player of the Season accolades, but a haul of 18 league goals and 12 assists represents an incredible campaign of productivity.

The Portugal international has scored 28 goals in all competitions this season, breaking Frank Lampard’s record for the most prolific season by a Premier League midfielder.

Finalising our predictions weeks before the closure of the transfer window made many of our selections difficult, at least that’s what we’re telling ourselves after hitting a number of guesses well wide of the mark.

Amongst the nominations for ‘biggest transfer flop’ from our writers was Thiago Silva, the veteran signing for Chelsea on a free transfer with fears the speed and physicality of English football could catch up with the ageing centre-back.

Instead, Silva has shown just why he has been one of the best central defenders in world football over the past decade, demonstrating that speed of thought trumps speed of legs almost every time.

Manager of the Season – Ralph Hasenhuttl

Southampton were strongly favoured in our predictions with multiple writers predicting the Saints could be the Premier League’s surprise package this term, a scenario which looked like unfolding as the club briefly led the division for the first time in their history in November.

Ralph Hasenhuttl has since seen his side nosedive over the second half of the campaign however, including a run of nine games without a win that included a 9-0 thrashing at Manchester United.

Predictions for Hasenhuttl to be named Manager of the Year proved wholly inaccurate, as did one wild shout for Scott Parker, who has oddly received plenty of plaudits this season despite suffering relegation with Fulham.

Four managers have been sacked in the Premier League this season, with our writers successfully leaning towards West Brom’s Slaven Bilic and Chelsea’s Frank Lampard – the first two managers to bite the bullet.

Bilic was axed as the Baggies struggled with the step up into the Premier League, whilst Lampard’s inability to show tangible progress despite a wealth of investment saw him fired at Stamford Bridge.

Two shouts from our writers for David Moyes proved foolish in hindsight however, the wily Scot overseeing a successful season of overachievement at the London Stadium.

Watching young players emerge can be the highlight of a Premier League season and we gave our best predictions for the next gem to shine in the top tier.

Ben White, Curtis Jones and Eberechi Eze have had pleasing seasons after being tipped by our writers, though Rhian Brewster has failed to shine after a club-record move from Liverpool to Sheffield United.

Brewster’s prolific loan spell in the Championship with Swansea last term persuaded the Blades to splash out £24m on his services, an investment that has returned exactly zero goals and zero assists from 25 league appearances.

Sheffield United will take some hope from Brewster’s previous exploits in the second tier, where both he and the Blades will be playing their football next season after a campaign of struggle.

For a full look (and laugh) at our 2020/21 pre-season predictions, click here and we’ll be back again next season with our often malfunctioning crystal balls!