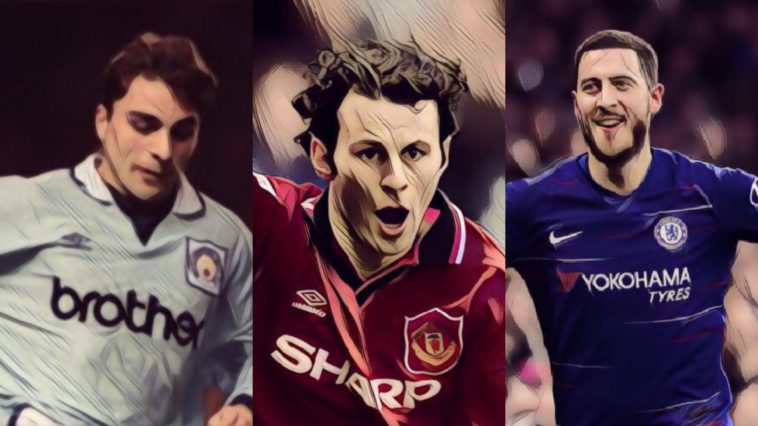 The best dribblers are the ones with no fears, no inhibition and love the thrill of running downhill into the opposition’s heart.

Dribbling can be a fool’s errand; running into blind alleys or straight into a defender is par for the course if you are at all hesitant about the route you’ve chosen to go down. It can be difficult to master after all.

There is an art to this skill, which requires footballers to literally think on their feet. In fact, there’s barely a moment to think; you have mere milliseconds to react when taking on the man or woman in front of you, leaving your brain behind to allow your instincts take control of the ball

There is a level of bravery involved when a player embarks on a dribble, full in the knowledge that the opposition will come for you, that they will hunt you down and take you out by any means necessary. But when it comes off, there are few greater feelings than getting by someone and moving into open space; the adrenaline levels rise, the crowd are off their feet, and everyone is anticipating what happens next.

Five of the best dribblers of the Premier League era:

Despite suffering relegations in two of the three seasons he played for Manchester City, Georgi Kinkladze is considered a bit of a legend in Eastlands, where he was arguably the most talented player to line out for the club in the nineties.

The Georgian maestro had an unpredictable nature about him, to the point where you were unsure if even he knew what he was about to do next. Often times it appeared he was going nowhere fast, before jinking one way then the other and all of a sudden he’s one-on-one with the goalkeeper. This was very much encapsulated by his famous goal against Middlesbrough:

‘Kinky’ later played for Ajax, Derby County and Portsmouth, but it was Manchester where he made a name for himself in the Premier League.

One of the most dangerous attacking threats in the Premier League, Wilfried Zaha’s dribbling has mesmerised crowds at Selhurst Park for many years now. It’s not just his ability to take on a man with his pace though, it’s also his tremendous skill and goalscoring that makes him such a formidable opponent.

For the past five years the Ivorian international has been one of the most dispossessed players in the top flight, which one would usually consider a negative trait, but it is a sign of how often he takes the ball into dangerous positions in the final third and how much importance Crystal Palace place on Zaha when it comes to their attacking game.

The 2019/20 campaign is really only the first season we have seen Adama Traore be able to take his many natural gifts and turn himself into a consistent contributor to a team’s attack – the Mali man is currently on four goals and seven assists for the season.

The Wolves winger is by far the most muscle bound player we have ever seen in the Premier League, making him the most imposing footballer on any given pitch he steps onto. The opposition is forced into fouling him to the ground, as it’s the only way to stop him. But even then, if the former Barcelona player builds up a head of steam and runs at you with his electric speed, there’s very little you can do to block him. Just pray for the best.

We admit there is a bit of recency bias going on in this list here, but some of the footballers we have seen in recent years have brought dribbling on to a whole new level. Eden Hazard is one such player, one of the most talented people we have seen in the Premier League, let alone one of the best dribblers.

While most players with his ability and skill set would champ at the bit to play more centrally up front, the Belgian loved nothing more than bomb down the wing, effortlessly beat a man with his magic feet, before cutting inside the box to either have a pop at goal or set someone else up for a shot.

Hazard has struggled with injury since moving to Real Madrid, but his 85 goals and 47 assists in 245 appearances for Chelsea ensures that he will be considered one of the league’s greats.

Would a list of the Premier League’s greatest dribblers ever truly be complete without a mention of the Welsh Wizard? Ryan Giggs’ senior career began in 1992 and lasted all the way until 2014, and in between he became one of the most decorated footballers of all-time.

While the winger eventually became a central midfielder in the latter end of his time at Manchester United, the thing that really made him stand out throughout his career was his incredible ability to take on defenders, sometimes beating several men on his way to goal.

In that respect, Giggs’ most iconic goals were the insane dribbles he completed against Arsenal in the 1999 FA Cup semi-final and against Juventus in the Champions League in 2003.

In both cases the Welshman appears as if he is gliding across the surface, scything through the defence at ease before slotting home for two memorable finishes. Not many players could do that.

Read: The Everton cult hero who subbed himself on in an FA Cup semi-final

See Also: Who was the first ever African to feature in the Premier League?