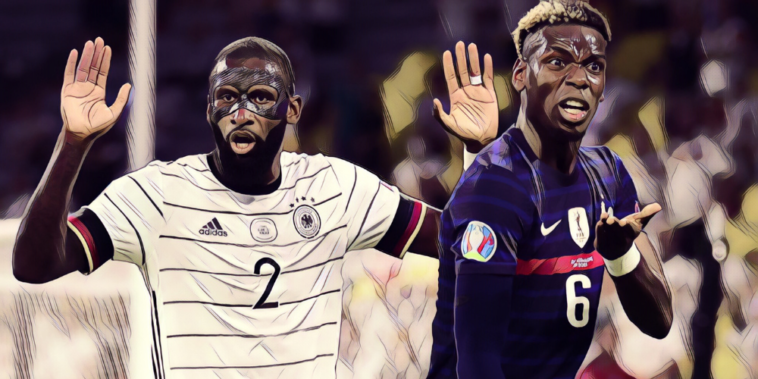 Paul Pogba does not want Antonio Rudiger to receive a suspension despite the defender appearing to bite the France midfielder during their 1-0 win over Germany.

Pogba starred as the world champions began their Euro 2020 campaign with a narrow victory over Germany in Munich, with Les Bleus having two goals disallowed as the favourites got their pursuit of the trophy off to a winning start.

The 28-year-old produced a brilliant pass in the build-up to Mats Hummels’ own goal for Germany, with the opposition’s attempts to stop the Manchester United midfielder including an apparent bite from Chelsea defender Rudiger in an unnoticed off-the-ball incident.

Rudiger could now face a UEFA investigation into the bite, though Pogba has played down the incident and says he does not want to see the German centre-back suspended.

“It was nothing big. You saw the television pictures and it is all over now, in the past,” said the Frenchman.

“He nibbled a little bit and I felt it so I told the ref but I am not crying for a yellow or a red card.

“Me and Toni have known each other for a long time and I just want to play football.

“He has not received any card and I don’t want him suspended because of that situation. We hugged at the end and it is over.”

Read Also – Five of the best players from Euro 2000