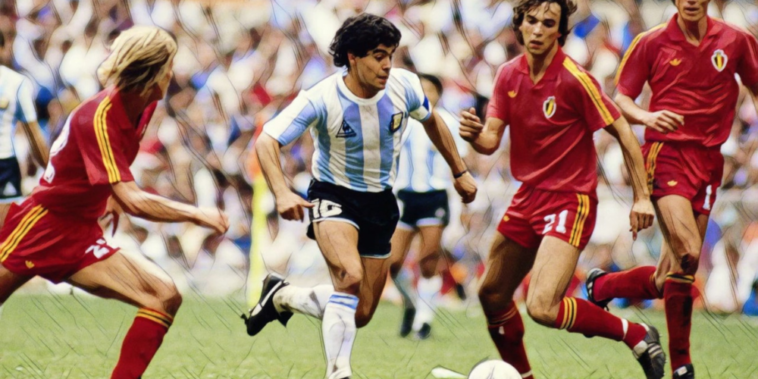 Lionel Messi faces a date with destiny this weekend as Argentina take on France in the World Cup final.

Messi’s claim as the greatest footballer of all time will be difficult to argue should the South Americans prevail, with the World Cup the one omission from his record-breaking career to date. It’s been a magical tournament from Messi so far, as the 35-year-old has rolled back the years to lead Argentina into the final.

He is the joint-leading scorer at the World Cup (5) and has provided the joint-most assists (3), while no player has been named as man of the match on more occasions (4).

Victory this weekend will see Qatar 2022 remembered as Messi’s tournament and we’ve decided to look back at five names who grabbed World Cups by the scruff of the neck.

Pele announced his arrival as a global superstar during the 1958 finals in Sweden, a tournament which gave birth to Brazil as a football superpower.

The South Americans had lost the final on home soil eight years earlier, but travelled to Europe with ambitions of being crowned champions. The confidence of Brazil was boosted by the presence of Pele, a precociously talented teenager and the Selecao’s secret weapon.

A knee issue saw Pele miss the first two games of the tournament, but he returned as Brazil beat the Soviet Union 2-0 to progress to the knockout rounds. From there the 17-year-old was electric, scoring his first goal of the tournament as Brazil edged past Wales in the quarter-final.

No player has ever scored a World Cup goal at a younger age, and in the semi-final, he made more history. Pele scored a stunning hat-trick as Brazil thrashed France 5-2 in Solna, booking a final meeting with host nation Sweden.

He scored twice more in the final, including one of the World Cup’s most iconic goals as he flicked the ball over Bengt Gustavsson before firing home on the volley as it dropped on the other side. It was a moment of genius from Pele, who at 17, was the star attraction on football’s biggest stage.

He featured again as Brazil defended the trophy in 1962, before starring during their 1970 success to become the first, and only, three-time World Cup winner. Pele was magical in that final tournament, where he scored in a second final as Brazil’s iconic team thrashed Italy in Mexico.

Argentina were crowned world champions for the first time on home soil in 1978, emerging triumphant from a tournament that was shrouded in controversy.

Teams had considered pulling out of the finals, played against the backdrop of human rights issues, match-fixing allegations and political tensions, following a military coup in Argentina in 1976.

When the football began, it was Mario Kempes who led the charge of the hosts. The star name in the Argentina side, he had finished as La Liga’s leading scorer in two consecutive campaigns leading into the World Cup.

Kempes began the tournament slowly, but burst into life during the second group phase. He scored twice in a 2-0 win over Poland, before netting another brace as Peru were thrashed 6-0. Needing to win by a four-goal margin to reach the final, Argentina hit Peru for six to book a final match-up with the Netherlands in Buenos Aires.

In the final, Kempes again came to the fore, scoring another brace at the Estadio Monumental. Dick Nanninga’s headed equaliser had forced extra time for the Dutch after Kempes’ opener, but the forward found a winner as he burst into the box – evading two challenges – before turning home at the second attempt.

Daniel Bertoni scored a third to confirm Argentina’s coronation as champions, but it was Kempes who had inspired their success. He finished as the tournament’s leading scorer with six goals and was awarded the World Cup’s Golden Ball.

There was criticism of Paolo Rossi’s inclusion in Italy’s squad for the 1982 World Cup finals, with the forward having only recently returned from a two-year suspension for his part in a Serie A match-fixing scandal.

It was a bold call from manager Enzo Bearzot, but one that paid off as Rossi illuminated the latter stages. After an underwhelming start to the tournament, Rossi produced one of the World Cup’s great individual performances with a hat-trick against Brazil to send Italy into the last four.

He scored twice more as Poland were beaten in the semi-final, before opening the scoring as the Azzurri defeated West Germany in the final.

Rossi’s six goals made him the World Cup’s leading scorer and he remains the only European to have won the World Cup, Golden Boot and Golden Ball in the same tournament. Only Brazil’s Garrincha (1962) and Argentina’s Mario Kempes (1978) had previously achieved the feat.

He was later acknowledged with the 1982 Ballon d’Or and remains Italy’s joint-leading scorer in World Cup history, alongside Roberto Baggio and Christian Vieri, with nine goals.

If there’s one man often credited with winning the World Cup after taking the weight of a nation on his shoulders, it’s Diego Maradona.

Maradona’s 1986 tournament remains arguably the most iconic individual showing at a finals, as he scored five goals and provided a further five assists to inspire Argentina to a second title.

His first goal came in a group stage draw with Italy, before Maradona produced that performance against England in the last eight. His infamous ‘Hand of God’ goal was followed with a sensational second, as Maradona embarked on a scintillating solo run to eliminate England.

Is it the greatest goal of all time? 🤔#WorldCup | @Argentina pic.twitter.com/NIayJODf8G

The magical number ten then scored twice more as Belgium were beaten in the last four, with his second another special strike that encapsulated the brilliance of the planet’s finest footballer. Four red shirts were unable to stop his path to goal, as Maradona weaved through traffic before slamming home his second of the semi-final.

His impact was less tangible in the final, though he threaded the pass for Jorge Burruchaga to score the winner in an entertaining 3-2 win against West Germany. Fittingly, he was acknowledged with the World Cup’s Golden Ball.

The tournament that brought Ronaldo redemption after an arduous route back to the top of the game. Four years earlier, Ronaldo had been named as winner of the Golden Ball after inspiring Brazil to the final, but a convulsion suffered just hours before the decider saw him perform as a shadow of himself in defeat to France.

He then missed Brazil’s entire qualification for the 2002 World Cup in Japan and South Korea, as serious knee issues threatened the career of O Fenômeno. He returned just before the finals, but there were doubts over whether Brazil would risk taking Ronaldo to the biggest sporting event on earth.

Fortunately, for Ronaldo and the watching world, Brazil gambled.

At the finals, Ronaldo was simply unstoppable. He scored in all but one game as Brazil reached the final, with his winner against Turkey in the semi-final securing a date with Germany in Yokohama.

In the biggest fixture in football, his redemption was completed, as Ronaldo scored both goals in a 2-0 win to crown Brazil world champions for a fifth time.

He missed out on the Golden Ball to Oliver Kahn, but this was Ronaldo’s tournament. His eight goals is the highest record in a single World Cup since 1970. The phenomenon was back and on top of the world.