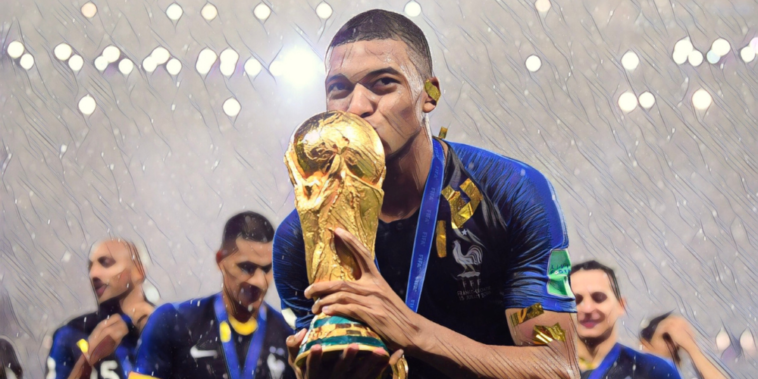 The FIFA World Cup is often regarded as football’s pinnacle and each edition provides players with a chance to make their mark on the world stage.

Past editions have seen promising talents burst onto the scene to become household names, never more so than Pele, who starred during Brazil’s 1958 success as a 17-year-old in Sweden.

FIFA have awarded an official accolade to the tournament’s best young player since 2006, though the governing body organised a survey for users to choose the “best young player” from past editions with players honoured from every World Cup since 1958.

Ahead of the final, we’ve decided to look back at the modern winners of the award, here are the last five winners of the World Cup’s Best Young Player accolade.

Kylian Mbappe was named winner of the FIFA Young Player Award for his performances at the 2018 World Cup, having helped France become world champions for a second time.

The 19-year-old was an influential figure during Les Bleus’ run to success in Russia, scoring four goals during the nation’s victorious campaign.

Mbappe scored the winner in a 1-0 win over Peru in the group stage, before starring during a thrilling 4-3 win over Argentina in the last 16, scoring twice and tormenting the South Americans with his scintillating speed.

His performances helped France to reach the final, where he scored in the 4-2 win over Croatia to become just the second teenager – after Pele in 1958 – to score in a World Cup final.

He came alive in the knockout stages to truly announce himself as an international superstar.

Paul Pogba was voted as the best young talent at the 2014 World Cup, following the midfielder’s role in France’s run to the quarter-finals.

Pogba had starred since leaving Manchester United for Juventus two seasons earlier and was a prominent figure in France’s campaign, scoring a crucial opening goal in a man-of-the-match performance against Nigeria in the last 16.

He finished ahead of Memphis Depay and Raphael Varane in the voting, after showcasing his mix of technical talent and physical prowess in Brazil.

Four years later he formed part of the victorious France side that won the World Cup in Russia, scoring in the final win over Croatia.

Having earned just two goalless caps before the 2010 World Cup in South Africa, Thomas Muller burst onto the scene at his first major tournament.

A productive first full season at Bayern Munich had earned Muller a place in Germany’s squad and he proceeded to emerge as one of the stars of the tournament.

🇩🇪 A 20-year-old @esmuellert_ was something else at the 2010 #WorldCup 🤩pic.twitter.com/G70Iozm8bG

Muller netted his first international goal in Germany’s opening 4-0 win over Australia, before starring during knockout round destructions of England and Argentina, scoring twice against the former in a 4-1 win for Joachim Low’s side.

The 20-year-old was suspended for the semi-final loss to Spain, but returned to score his fifth goal of the tournament in the third-place play-off win over Uruguay,

His performances earned Muller both the Best Young Player Award and the Golden Boot, announcing his arrival as German football’s latest top talent.

The first official award was handed to Lukas Podolski, who proved a fine supporting act to Miroslav Klose during a home World Cup for Germany in 2006.

The 20-year-old forward scored three goals during the finals, including a match-winning brace as Sweden were beaten in the last 16.

The breakout star at #WorldCup Germany 2006 🇩🇪🏆 was @Podolski10! pic.twitter.com/bdwvZukXtw

Podolski’s performances saw him beat the likes of Cesc Fabregas, Lionel Messi and Cristiano Ronaldo to the award, in what was the second of seven major tournaments he competed in for Die Mannschaft.

Landon Donovan was retrospectively voted as the Best Young Player from the 2002 World Cup, as the poster-boy for US football helped his side to the quarter-finals.

Donovan shone as the United States upset Portugal 3-2 in their group opener, before scoring during clashes with Poland and Mexico as the Americans reached the last eight.

2002 #WorldCup was an unforgettable one for @LandonDonovan

Watch the entirety of 🇲🇽 vs 🇺🇸 from '02 on the official World Cup Facebook page on 27 April at 16:00 CET pic.twitter.com/VPXOVAWYSk

Despite being the only player on this list without a World Cup winners’ medal, Donovan remains regarded as one of the greatest players the USA have produced and is the nation’s joint-record goalscorer alongside Clint Dempsey, with 57 goals.

He enjoyed spells in Europe with Bayer Leverkusen, Bayern Munich and Everton, though the best period of his club career came with LA Galaxy as he scored 141 goals in all competitions across two spells, a club record.