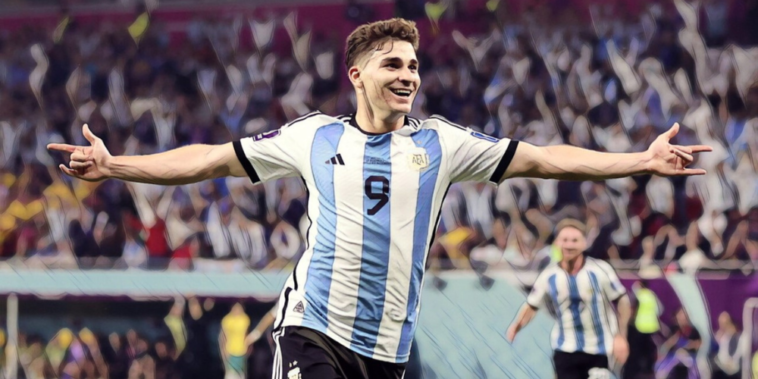 Argentina will take on France in the World Cup final this weekend, as the two teams go head-to-head for the chance to be crowned world champions in Qatar.

There will be history made, whichever side triumphs. Lionel Messi will be looking to lead Argentina to the title and add the one glaring omission to his decorated career, while France are hoping to become the first nation to defend the World Cup since 1962.

At the centre of both sides is a collection of Premier League names, with ten involved across both squads. Here are the ten Premier League players involved in the 2022 World Cup final.

Hugo Lloris could make history as the first man to captain his nation to two World Cup triumphs. The leader of France’s success in Russia four years ago, he will lead out Les Bleus in a second successive final this weekend.

Five men have captained World Cup-winning teams and won the trophy twice, but were not captain for both successes. Argentina’s Diego Maradona (1986, 1990) and Brazil’s Dunga (1994, 1998) also captained their sides in two final matches, but only won on their first occasions.

He overtook Lilian Thuram’s record against the Three Lions and the Tottenham goalkeeper will win a record-extending 145th cap for France in Sunday’s final.

Alphonse Areola is also a part of France’s goalkeeping unit, but has failed to make an appearance in Qatar.

The 29-year-old has struggled for regular minutes at West Ham this season, featuring predominantly in the club’s Europa Conference League campaign with Lukasz Fabianski preferred for Premier League fixtures at the London Stadium.

Areola also formed part of the 2018 World Cup-winning squad, but did not make his international debut until after the tournament. He became just the fourth man – after Italy’s Franco Baresi and Giovanni Galli in 1982 and Argentina goalkeeper Héctor Zelada in 1986 – to win the World Cup before his debut.

Emiliano Martinez is the third Premier League goalkeeper set to be involved in the 2022 World Cup final, having been Argentina’s first-choice throughout the tournament.

Martinez broke into the national side in 2021, following an impressive debut season at Villa in which he won the club’s Player of the Season accolade. He won the Golden Glove and was named in the Team of the Tournament as Argentina won the 2021 Copa America, and will now have the chance to win the World Cup this weekend.

He saved two penalties in a shoot-out win against the Netherlands in the quarter-finals, as Argentina progressed to the last four.

Raphael Varane will feature in a second successive World Cup final this weekend, as the France centre-back looks to add another world title to his incredible résumé.

After three league titles and four Champions League trophies at Real Madrid, Varane is now just one win from becoming a two-time World Cup winner. It would be a stunning achievement for the 29-year-old, who feared he was out of the tournament after he suffered a hamstring injury in Manchester United’s draw with Chelsea last month.

Varane missed the opening win against Australia, but has featured in all five games since and was excellent in the semi-final win over Morocco. He dominated his duel with the dangerous Youssef En-Nesyri as France recorded a clean sheet to reach Sunday’s showpiece.

France’s depth of centre-back options has seen William Saliba take on a fringe role in the squad, despite his outstanding performances for Arsenal this season.

Saliba has been a revelation for the table-topping Gunners, but has featured for just 27 minutes in Qatar.

The 21-year-old has won eight caps since his senior debut in March, but his found himself behind Varane, Dayot Upamecano and Ibrahima Konate for a place in the France side at the World Cup.

Ibrahima Konate was included in the France squad for the tournament despite missing the start of the domestic campaign with injury. His performances in Qatar have been impressive despite limited minutes at Liverpool, with Konate outstanding during the semi-final win over Morocco.

Brought back into the starting side due to Dayot Upamecano’s illness, he made several vital interceptions and denied Youssef En-Nesyri a tap-in for Morocco. The 23-year-old has started three games at the World Cup and will hope his semi-final performance is enough to earn a fourth start in this weekend’s final.

His return to fitness and form will have pleased Jurgen Klopp ahead of the Premier League’s return later this month.

Manchester United will have a World Cup-winning centre-back this weekend, regardless of who triumphs in Qatar. Lisandro Martinez will go head-to-head with club teammate Raphael Varane in the World Cup final, having formed an encouraging understanding with his fellow defender at Old Trafford this season.

Martinez has been in and out of the Argentina side during the tournament, making two starts and featuring as a substitute on a further three occasions.

He was drafted in as Lionel Scaloni reverted to a back three to deal with the threat of the Netherlands in the last eight, and it remains to be seen what game-plan Argentina go with to combat the threat of Kylian Mbappe and France.

An unconvincing defence has hindered Argentina at past tournaments, but the emergence of Cristian Romero has provided La Albiceleste with a reliable rock at the back. After a shaky opening performance in the defeat to Saudi Arabia, the Spurs centre-back has been in fine form for Argentina during the tournament.

He was brilliant in the semi-final win over Croatia, a performance full of characteristic commitment as he powered into challenges and snuffed out danger.

Just two players – Christian Ziege (2002) and Hugo Lloris (2018) – have ever previously appeared in a World Cup final as a Tottenham player. Compatriots Ossie Ardiles and Ricky Villa memorably moved to the north Londoners after their role in Argentina’s 1978 success on home soil.

The South American schemer with the Scottish surname has been a pivotal part of Argentina’s run to the final, starting five games and scoring during the group stage win over Poland.

Mac Allister was first capped for Argentina in 2019, but was recalled earlier this year after a two-and-a-half year absence from the national side. The 23-year-old has been in excellent form for Brighton this season, for who he has scored five Premier League goals so far this season.

Round of applause for Alexis Mac Allister by the way.

He has been absolutely fantastic! 🇦🇷👏 pic.twitter.com/OoSKxFfWki

Mac Allister’s father, Carlos, won three caps for Argentina and featured alongside the great Diego Maradona for club and country. His son now has the chance to win Argentina’s third World Cup, alongside another icon in Lionel Messi. He will become Brighton’s first ever World Cup finalist.

Just over a year ago, Julian Alvarez was little known outside his home continent. Emerging with excitement at River Plate, he has since enjoyed a remarkable rise to worldwide prominence.

Manchester City secured a deal to sign the forward last summer and he has impressed across his opening months in English football, despite the presence of Erling Haaland at the Etihad.

Having scored his first international goal in March, he was included in Argentina’s World Cup squad and began the tournament on the bench. He scored in the group stage win over Poland, before retaining his place for the knockout rounds where he has since thrived.

Starting ahead of the more experienced Lautaro Martinez, Alvarez netted again against Australia in the last 16, before scoring a double as Croatia were beaten 3-0 in the semi-finals.

The 22-year-old – who has seven goals in 18 international appearances – is set to start Sunday’s final as Argentina look to be crowned world champions for a third time.