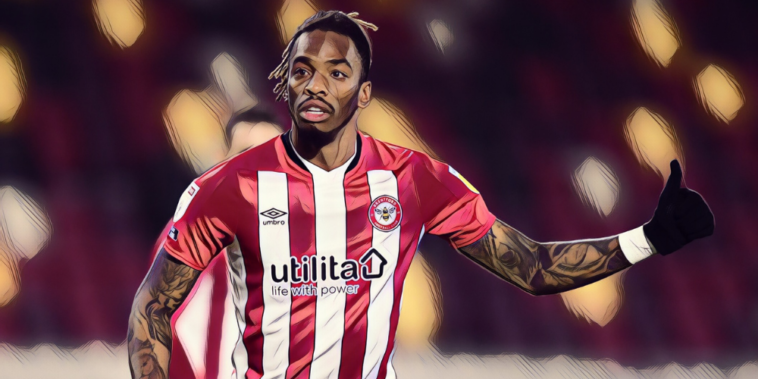 While Premier League clubs now have recruitment and scouting networks extending to virtually every part of the globe, the Championship remains a bastion of exciting, talented players.

Of all the clubs in the division, Brentford are setting the pace in terms of unearthing talents and selling them on to Premier League clubs. James Tarkowski, Ezri Konsa, Neil Maupay, and most recently, Said Benrahma and Ollie Watkins, are just some of Brentford’s products who have become established top-fight players.

Toney is a classic predatory forward, a dominant force in the opposition penalty area. Having impressed at Peterborough United in League One, the 25-year-old was picked up by Brentford to replace now-Aston Villa striker Ollie Watkins. With 31 goals and a further 10 assists in the Championship, he’s undoubtedly been one of the signings of the season.

As a general aim, Toney looks to occupy the space between defenders — whether that’s two centre-backs or a centre-back and a full-back. That immediately puts the opposite backline in doubt: who picks him up? Toney’s ability to attack such spaces constantly put defenders on the back foot.

He extends that dilemma through the specific movements he makes. Whether it’s curved runs from the blind side of his marker to arrive ahead of them when attacking a cross or checking a run to the near-post to deceive a defender, Toney is constantly on the move in the penalty area. Those movements can be subtle, simple adjustments of footwork or a cursory nudge to push a defender away, but compound the difficulty to mark him.

That’s a challenge for any defender, regardless of quality. Toney’s adjustment from League One to the Championship has been so seamless primarily because his currency as a goal-scorer is his off-ball movement. Defenders have to watch the ball because they must change their positioning and actions in relation to it, and so they’re not always aware of the movements surrounding them. That’s true at any level, and Toney’s movement exploits that. It’s a trait that is reflected in the type of goals he’s scored for Brentford this season. 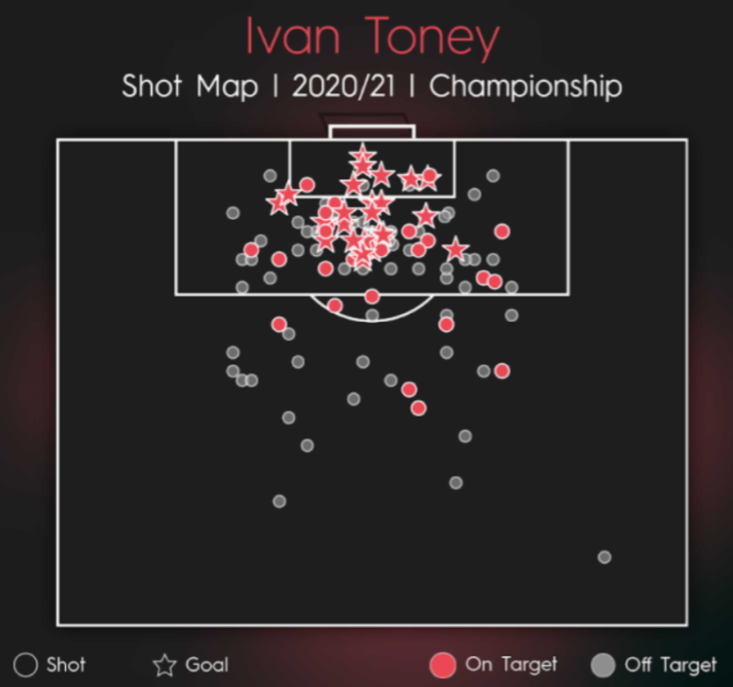 This shot-map from Twenty3 shows all of Toney’s shots from the Championship this year. Most of his goals are clustered around the penalty spot and six-yard box: the area where it’s easiest to score goals. That isn’t a criticism — people shouldn’t deride Toney for “only scoring tap-ins.” Instead, it shows that Toney is consistently able to get into areas where he can take high-quality shots. That’s invaluable as a goal-scorer. Thirty-yard screamers may make a neat highlight reel on YouTube, but they’re not a sustainable method for goal-scoring. Toney’s shots, coming on the end of crosses and cutbacks, are.

That replicability is enhanced by his versatility as a goal-scorer. Toney is a formidable aerial presence, winning 3.3 aerial duels per 90. His predatory instincts and low back-lift when shooting means he can get shots off quickly from loose balls or spilled saves. There’s also a certain ruggedness to some of his goals. He’s unafraid to use his strength to bully his way ahead of a marker or stick a leg out in a congested area. It’s not a particularly glamorous part of his game, but it makes him a more complete goal-scorer.

Above all this, Toney is an incredibly clinical finisher. He’s missed just ten big chances in the Championship, which for context, is one less than England’s best striker Harry Kane has in the Premier League. Of course, he’ll be facing better goalkeepers in the Premier League. But not only will he have better teammates to produce more and better chances, the types of goals he scores — in the penalty area, dispatching a cross having got ahead of his marker — are difficult for any keeper of any standard to stop.

Of course, strikers need to do more than just score goals. Toney works extremely hard when pressing, harrowing opposition defenders and intelligently cutting off passing lanes into midfield. He also uses his height and strength to drop deeper and pose as a target from goal-kicks.

Unlike many modern strikers, Toney doesn’t interchange positions with the players around him frequently. He does drop off, but it’s usually to hold up the ball or keep attacks flowing rather than create chances for others. In some tactical styles, that could be a limitation. It’s an ability that can be coached, though, and Toney is by no means a liability in his contributions to build-up.

Should Brentford fail to be promoted through the play-offs, a Premier League team should absolutely try to buy Toney. Marcelo Bielsa and Leeds United are reportedly admirers of the Englishman, and he could provide a more natural goal-scoring alternative or partner to Patrick Bamford. He would also suit Leeds’ high-pressing style, although he may need to become more accustomed to drifting wide and participating in combination play.

Toney has also been linked to Leicester City, who could purchase him as a replacement for Jamie Vardy. He’s not as quick, but the Bees forward is mobile enough to pose a threat in behind and he could profit more from deep crosses from Leicester’s excellent fullbacks. Rodgers could potentially deploy Toney against deeper sitting defences and add a new dimension to the Foxes’ attack.

West Ham are another team who are interested and with Michail Antonio as their only recognisable centre-forward, Toney would certainly fill a hole in their squad. His aerial ability would suit David Moyes’ direct approach, and he could allow Antonio to play deeper and utilize his superb dribbling. In Jarrod Bowen and Said Benrahma, the Hammers also have a recent track record of acquiring Championship players and assimilating them into Premier League life.

Whichever club he plays for next season, there’s no doubt that Ivan Toney is a Premier League calibre forward. From rejection at Newcastle to becoming the Football League’s best player, his meteoric rise in English football is a unique and impressive story that will only continue to grow richer.